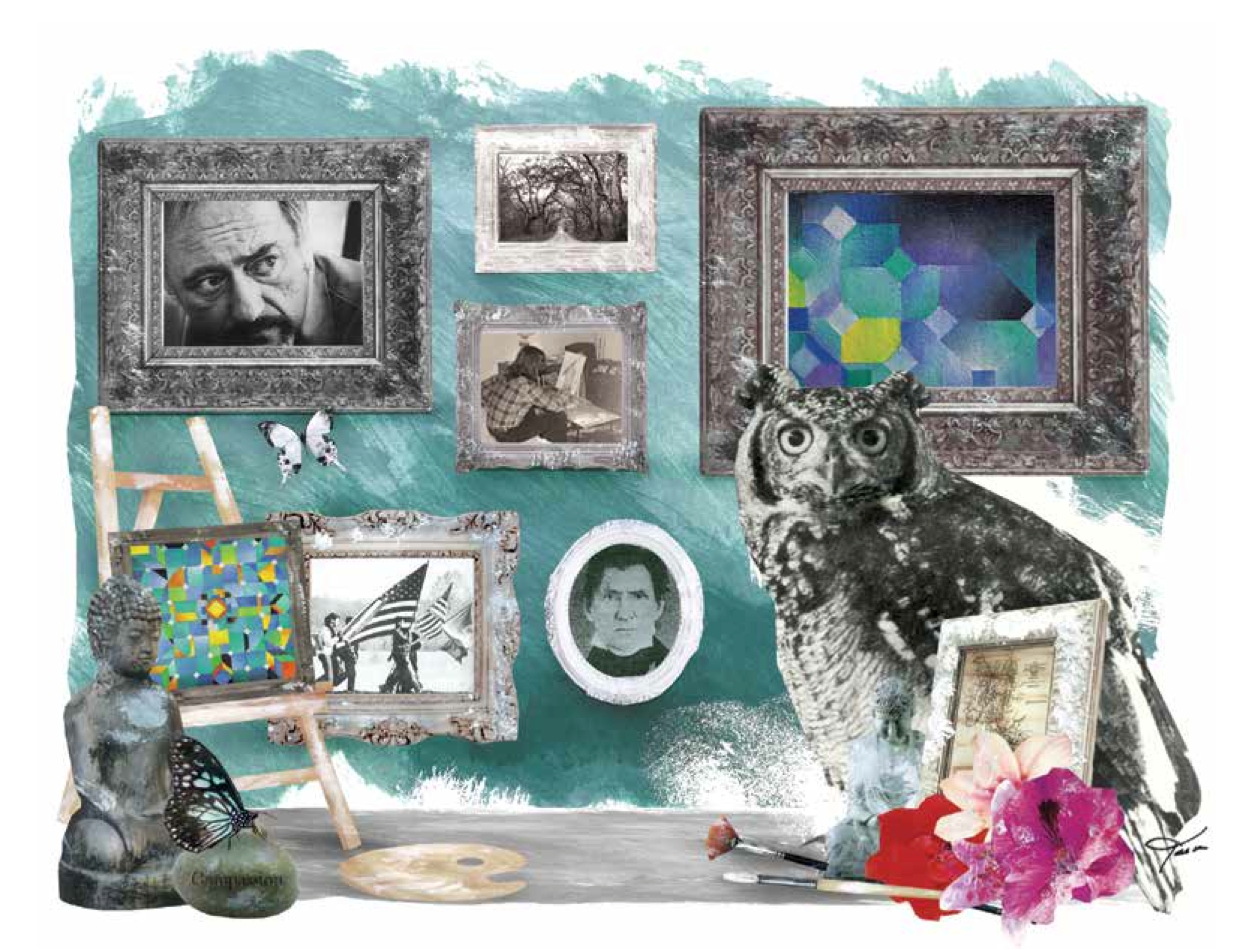 Illustration by Tara Hardy. Clockwise from left: The author’s father, Pat Watters; her brother Patrick painting; art by Patrick; a map of Sherman’s march, during which the Watters “Hermitage” was ransacked; great-great-grandfather Col. Joseph Watters; Pat marching for civil rights; art by Patrick.

The loss of her brother sent her on a journey into the past, where Ellen Watters Sullivan encountered a family legacy of shame as old as the American South itself. Could she cultivate compassion for her slaveholder ancestors, their victims, and herself?

I stopped praying when my brother Patrick died from drinking. A few years earlier, Patrick had been born again—I remember watching the Evangelical minister dunk him in a pool of water set high up above the modern church altar, all the glass and steel soaring up and glinting in the sun. I felt hope then. I prayed hard and believed. Every time my brother drank, and stopped and then drank again, I believed he was in God’s hands and God would do the right thing. I never thought God would let him die, but He did. I have not forgiven and I cannot forget, but I do let go, a little at a time.

The week after Patrick died, I went to clean out his apartment, as I had done so many times before, when his alcoholism had gotten him evicted and sent off to rehab. Ever since I was sixteen and could drive, I had bailed Patrick out, delivered him to rehab, and weeks later picked him up and helped him start over. Now, I packed his stuff one last time. I carefully wrapped his artworks and placed them inside his portfolio, thinking, with some guilt, “at least neither of us will have to keep this routine going anymore.” And there I was on a small reef of relief in the deepest ocean of sadness I had ever felt.

Returning to the source, to the Watters plantation, acknowledging the anguish my family created and experienced for generations, I have taken off the blinders of denial.

Patrick was a sensitive artist, and all he wanted was to draw and paint pictures with extraordinary imagination and detail. His depression, though, would envelop him in blackness—the light would go out in his eyes, and the person who could see and create such colorful worlds in his artworks would disappear.

Nothing he had done seemed to warrant the suffering he experienced from depression and alcohol. I needed to know: why had Patrick suffered so? My father and grandfather had also been plagued by depression and died from alcoholism-related diseases. I started to look into our Georgia family’s history, going back as far as I could. What I found was a legacy of horrific actions and deep shame.

The Watters family settled in northwest Georgia before the American Revolution, pioneering into Cherokee-owned land. My great-great-great-grandfather, Col. Joseph Watters—“the Colonel,” as he is still known—fought against Creek Indians alongside the Cherokee. Later, he participated in the Cherokee genocide and helped enforce the Indian Removal Act of 1830, which led to the Trail of Tears, in which the expelled Cherokee were forced on a horrific march across the U.S. to Oklahoma, during which many people suffered greatly and died. During this period, the Colonel also began accumulating human “property”—African slaves.

It was on a recent visit to the old homestead in northwest Georgia called the Hermitage that I discovered these and other pieces of Watters family history. They had been hidden for generations.

My father had taken me once to the Hermitage when I was a child and advised me to remember it. It was “where we came from.” But he didn’t seem to notice the slave houses in the back. He didn’t talk about the Colonel, his great-great-grandfather, who’d owned over forty slaves and committed atrocities against native people. Nor did he mention the Colonel’s ten sons, who fought in the Civil War on the Confederate side.

Piecing together the family past, I learned that when Sherman began his march into Georgia, he targeted my ancestors as prominent and outspoken secessionists. Here, as I see it, is where the longstanding cycle of pain in my family began, when the Colonel was said to have “died a broken man” after Sherman broke down the front door to his plantation and destroyed his land. It began what Jungian analyst Polly Young-Eisendrath calls the “unconscious emotional patterning [that] is passed along the generations in families.”

The discovery of my family’s slaveholding history shocked me. My father, Pat Watters, was an activist, author, and journalist who spent his life fighting for equal rights for African Americans, promoting desegregation in the Atlanta Journal and in several books. All his relatives disowned him and our family as a result. But Dad had never talked about our slaveholding history, not even to me—and he seemed willing to talk to me about anything.

The inability to talk about one’s slaveholding past runs deep in the South. Until very recently, talking about slavery among descendants of slaveholders has been taboo not just in the South but in all of the U.S. I believe this denial of our ancestors’ legacy is at the root of my family’s suffering—the depression and alcoholism that has followed us for generations. This suffering, this “unconscious emotional patterning,” began with the wrongful act of owning slaves, which was followed by unacknowledged shame, hatred, and anger over the losses after the Civil War.

Acknowledging the wrongs of my ancestors has given me a sense of freedom from a haunting past. Author and civil rights activist Lillian Smith said, “The human heart dares not stay away too long from that which hurt it most. There is a return journey to anguish that few of us are released from making.” Returning to the source, to the Watters plantation, acknowledging the anguish my family created and experienced for generations, I have taken off the blinders of denial. This has helped me restore my own personal faith, lost following Patrick’s death, and to practice meditation and prayer again.

I have been most helped by the Buddhist practice of metta, loving-kindness. It is a way out of the darkness of psychological bondage and the blindness of denial. In fact, it was while practicing loving-kindness that a sense of understanding for my slaveholder ancestors came to me during meditation: even people who would do such hateful things deserve compassion. In working to open my heart to the Colonel, I imagined him dying a broken man, suffering the consequences of his own misdeeds, and in so doing I found compassion for him. Metta practice has helped heal me, first through directing compassion to myself, then to those I love and honor, then to all sentient beings, and finally to the souls of my slaveholder ancestors. Compassion for them followed. Not easily, mind you, but gently and in time.

After Patrick died, someone asked me how I kept going, with all my family now dead and gone. There are no words to describe that feeling of being so orphaned, so alone in the world. But when I let go, there is a stillness out there, in the wilderness of my family spirit, that I live in every day. I’m still here. Still. Here.

Ellen Watters Sullivan is a writer and psychotherapist living in Vermont. She is writing a memoir, I Once Was Lost: How I Got Found, about her life growing up in Georgia and discovering her ancestors’ dark past.