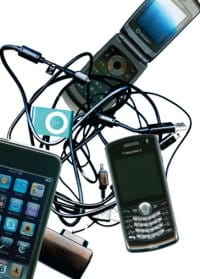 The “real-time web” offers round-the-clock pressures and distractions that make it hard to tell where the virtual world ends and the real one begins. Steve Silberman shares some tips on how to handle it mindfully and save your sanity.

On November 2, 1994, I got the most important email of my life. Its author was a young scientist who had read something on the internet about an article I’d written for Wired magazine. He wanted to know if I was also the guy who reviewed Grateful Dead shows for an online community called the Well.

I was. A few more emails and phone calls later, I met my correspondent in person at a brewpub in Berkeley. He turned out to be a shy, bright, handsome grad student at the University of California named Keith. Neither of us drink much, so we headed out to an old-fashioned soda fountain called Edy’s to share a banana split. Fifteen years later, Edy’s is gone, but Keith and I are still together, having taken a vow to love, honor, and cherish one another till death do us part.

Several of my closest friendships began with an email. My role model in science media, Robert Krulwich of National Public Radio’s “Radiolab,” introduced himself one day by forwarding a message from Jonah Lehrer, another gifted science writer. Last summer, a young poet from Ontario, Eric Cunliffe, stayed at our house on his first visit to San Francisco after befriending me on Facebook. Each of these relationships began with a fragile seed of connection—a shared interest, auspicious coincidence, or click on a link—that found purchase in our hearts and grew.

The web has become nearly inextricable from the fabric of our lives in a relatively short time. We work and play online, stay in touch with our loved ones, follow the news, track our investments, and plan our journeys in the offline world using Google Maps. As more people use wireless devices like iPhones to tap into the global network, it’s getting hard to tell where the virtual world ends and the actual world begins.

I saw a preview of the way we live now on the streets of Helsinki in 1999. Cellphones had not yet become ubiquitous in the U.S., but because Finland is the home country of Nokia, nearly everyone I met had a “kanny” in his pocket. It was strange to see Finns ignoring the person beside them in cafés while busily chatting and texting to friends who were someplace else. It was as if everyone lived in two places at once: wherever their bodies happened to be, and where they really were in their minds, which could change at the chirp of a ring tone.

We are all Finns now. The channel of distraction that used to be confined to the boxes on our desk is suddenly all around us, always on, teasing and tempting us with perishable tidbits of information. New-media experts call applications like Twitter, Facebook, and Google Wave the “real-time web.” The social currency of the real-time web is awareness of news breaking right at this instant. Have you seen that new viral video everyone’s talking about? The latest smackdown of you-know-who? Do you realize how much has happened in the past ten minutes?

The backlog of bleeping alerts starts accumulating the moment you glance away from the screen. We’ve been trying to reach you. She tweeted more than an hour ago. I just called and left a message on your phone. Where are you? We have banished the specter of boredom for the burden of always having something to do. Insomniacs can now find plenty of ways to occupy their buzzing minds at 3 a.m. The whole networked world has become the City That Never Sleeps.

This constant stream of titillating ephemera can pose challenges for people who are trying to live in a more conscious way. The effort of settling the mind in the here and now often requires reducing the amount of input and taking a friendly attitude toward boredom. “The practice of meditation can be described as relating with cool boredom, refreshing boredom, boredom like a mountain stream,” wrote Chögyam Trungpa in The Myth of Freedom.

Nowadays, we rarely allow ourselves to be refreshed by boredom. Restorative intervals of silence and solitude have become an endangered species of experience. As thankful as I am for the invaluable gifts that the internet has brought into my life, I also miss the slower pace of the pre-web era, the spacious, uninterrupted hours spent turning the pages of a novel with snow sifting outside the window. You could lose yourself in a book and come back to Earth feeling like you had a chance to make things right.

It’s hard not to wonder if all this connection and convenience is driving us crazy.

Henry David Thoreau, who praised the virtues of contemplative life off the grid in Walden, would not be surprised that our craving for constant communion has brought us to this point. “Our inventions are wont to be pretty toys, which distract our attention from serious things,” the sage of Concord wrote in 1849. “We are in great haste to construct a magnetic telegraph from Maine to Texas; but Maine and Texas, it may be, have nothing important to communicate… We are eager to tunnel under the Atlantic and bring the Old World some weeks nearer to the New; but perchance the first news that will leak through into the broad, flapping American ear will be that the Princess Adelaide has the whooping cough.”

Thoreau referred to much-touted technological marvels like the Transatlantic cable as “improved means to an unimproved end.” Some days it feels like he was right. The internet, once hailed as a wellspring of information that would reinvigorate public participation in democracy, has turned out to be a font of disinformation and spin. In the din of the 24/7 news cycle, every uninformed opinion and knee-jerk reaction—particularly outrage—gets turned up to “11.” Family members on opposite sides of issues like climate change and vaccine safety feel like they’re drifting farther and farther apart, into different countries with alternate versions of history.