Bhikshuni Thubten Chodron reports from a meeting of Buddhist monastics on the theme of “Monasticism and the Environment: Treating Planet Earth with Non-greed, Gratitude, and Simplicity.”

Each year, for fifteen years now, Western Buddhist monastics from diverse Buddhist traditions have been gathering together for four or five days to share our Dharma understandings and to support each other in Dharma practice. This year our gathering was entitled “Monasticism and the Environment: Treating Planet Earth with Non-greed, Gratitude, and Simplicity.” Forty monastics from the Thai forest tradition, Sri Lankan Theravada tradition, Chinese Ch’an and Pure Land traditions, and Tibetan traditions gathered together at City of Ten Thousand Buddhas in California. Unlike other gatherings in which we discussed a theme specifically related to monastic life, our presenters and their topics included:

The Buddha spoke not only about inner spiritual cultivation, but also about important social issues of his time As monastics who follow in his footsteps, we know that we can play an important role in informing people about global warming and destruction of the natural environment as well as in encouraging people to be proactive to prevent this and to preserve the environment. As citizens, we must do what we can on a personal level—from changing light bulbs to recycling to carpooling—but we must also do what we can as employers and employees of major industries. We must each do what we can in our own fields as well as communicate with those who make policies in other areas.

In the evenings we watched films about the environment: “Renewal” was about the inspiring efforts undertaken by various religious congregations in the US to protect the environment and the living beings in it. “Crash Course” was a challenging and informative presentation on the intersection of the economy, energy sources and usages, and environment. It had hints of what could lie ahead and how to deal with it. While difficulties will arise, it gives us a great opportunity to act and benefit society with compassion and bodhicitta.

In addition to all these fascinating presentations, we had a tour of City of Ten Thousand Buddhas and also a tour of nearby Abhayagiri Monastery. 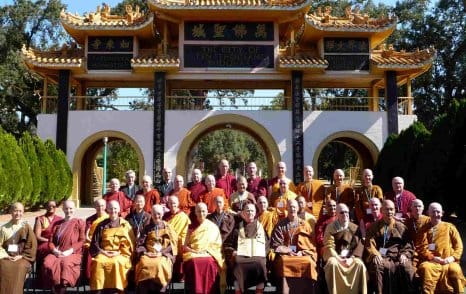 All of us use the Vinaya—the Buddhist monastic code of precepts and guidelines—to guide our lives. Within this commonality, it’s fascinating to see the variety Buddhist monastics lifestyles—some live together in dorms while others in isolated huts, some engage in social welfare projects while others emphasize study or meditation. We also shared in the community life of the residents of CTTB, with group with meditation and chanting in the morning and evening. I especially enjoyed chanting “Namo Amitofu”—Homage to Amitabha Buddha—as we all did walking meditation in a single line in the Buddha hall. Doing this with the children in the school was especially touching.

The CTTB community—about 200 people in all—said they were inspired by our gathering. In turn, we received so much hospitality from them—the monastics who organized the conference and the lay volunteers who worked tirelessly to help us as much as they could.

While the theme of the conference is important, just being together as sangha is wonderful and powerful. Our personal and small group discussions in the break times create strong bonds. They give junior monastics a chance to seek practice advice from seniors in other traditions; they provide monastics who live alone and those who live in community the opportunity share experiences. We had interesting discussions about the ultimate nature and how to realize it arise, as well as conversations about how to follow our spiritual mentor’s instructions and how to interpret certain precepts in a modern society. The feeling of unity we have as a “Sangha of the ten directions” is palpable and something that would please the Buddha. In previous centuries the various Buddhist traditions had little contact with each due to geographical separation and the absence of modern means of communication. As a result they had many misconceptions about each other. Western monastics want to do things differently because now people from diverse Buddhist practice lineages live together in Western countries. Thus we gather each year in friendship, aiding each other in building monastic communities, practicing the Dharma, teaching Buddhism, and benefiting society. This is a cause for great rejoicing.