“It has no celebrity spokespeople, no mainstream news coverage, no Super Bowl mentions. But tens of thousands of people, and millions of animals, are right now in a daily struggle between life and death, and many have already lost. I’m speaking of our brothers and sisters — two- and four-legged — caught in the most catastrophic winter the country of Mongolia has seen in at least 30 years. It’s a cold hell realm right here on earth.”

Outer Mongolia. You can almost feel the cold just from the name, can’t you? Mongolia’s winters are some of the world’s most intense in any given year. I know; I lived there from 2005-9 as Director for a project to assist in Mongolia’s post-Communist Buddhist revival (for centuries, Mongolia developed a Vajrayana Buddhist culture just as dynamic and profound as Tibet’s, much of which was destroyed during Stalinist purges and ongoing suppression throughout the 20th c.). By January in the capital, Ulaanbaatar, the daytime temperatures rarely rise above 0F/-18C and by nightfall can plunge as low as the point at which Fahrenheit and Celsius converge: -40. In the countryside where Mongolia’s nomadic herders live in their round felt gers (the homes most know by the Russian word yurt) it can be much colder even than that. But at least it’s usually dry, relatively windless, and quite sunny. 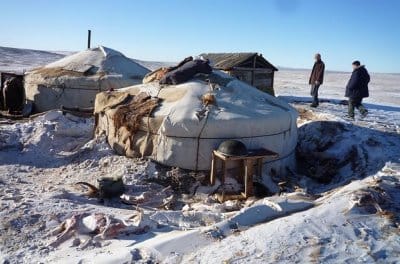 Then there are years like this one, in which the Mongols and their animals endure what they call a dzud. I very roughly translate this as “a winter that’s atrocious even by Mongolian standards.” Dzud is actually a double-whammy. It refers to an unusually dry summer that stunts the growth of pasture grass, keeping animals thinner and limiting what can be gathered for hay. Then a brutal winter hammers down, exceptionally cold (often down to -55F/-48C) with blizzards that bury pasture grass under an impenetrable blanket of snow. Meager stores of fodder are soon exhausted, and the freezing sheep, goats, cattle, yaks, camels, and horses upon which the Mongolian herders depend start to die. Quickly. And in almost unimaginable numbers.

As of this writing, Mongolian and international aid agencies estimate that more than 2 million domestic animals have perished so far in this dzud. Ten to twelve million died in the last disastrous episode ten years ago, and this dzud is regarded as far worse. Some fear that up to 20 million animals — half of Mongolia’s total herd — may succumb before tolerable weather arrives in late May. 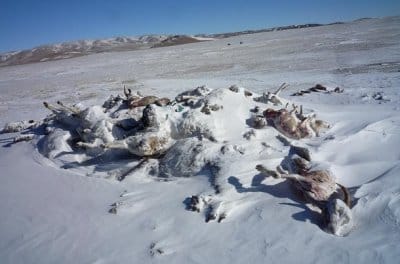 Mongolia: frozen animals on the steppe

The human toll is just as devastating. Scattered across a country as big as Western Europe, some 750,000 Mongolians’ livelihoods derive almost entirely from herd animals. A devastating dzud plunges tens of thousands under subsistence level, themselves risking starvation and illness. As in the last dzud, many families will migrate as economic refugees to the already grossly overcrowded capital. With no skills to apply to survival in an urban environment, desperation drives people to barely exist by picking through trash, begging (including even the smallest children, some of whom live on the streets even in winter), and prostitution. This degrading situation is often made even worse by domestically produced vodka that’s cheaper than milk.

Are there rays of light in this bleak scenario? There are. Since the previous dzud, many Mongolian aid agencies have developed, and international ones have established branches in Mongolia, to provide disaster intervention and longer-term relief to Mongolia’s struggling nomads and pastoralists. While the UN, WHO, and International Red Cross are active, I am recommending a smaller, but very effective, UK charity for any donations people wish to give for immediate disaster relief, called the Cambridge Mongolia Development Appeal (CAMDA).

CAMDA has been on the ground in Mongolia assisting herders since the last major dzud a decade ago. Working on its own and in partnership with reputable organizations such as the World Society for the Protection of Animals (WSPA) and the Society for the Protection of Animals Abroad (SPANA), CAMDA primarily focuses on the veterinary health of horse herds—indispensable to the pastoral life—as well as introducing improved, affordable hay-gathering methods, and facilitating the digging and maintenance of wells in the grazeable areas of the Gobi Desert.

I know the Mongols as a proud and resilient people, deeply faithful Buddhists who are unstinting in their generosity to strangers. But there are times, like now, when too much is just too much and they themselves desperately need a helping hand. Please give what you can. Funds received now will go directly to providing fodder to the most desperate herders’ animals, fuel for their gers so their families can survive until spring, and any other aid that is necessary. Leftover resources will be used for CAMDA’s longer-term pastoral Mongolian development projects.