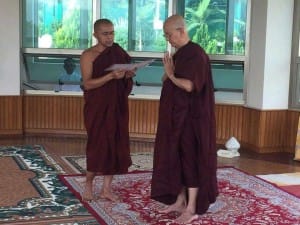 Thein Sein (right) stands with a fellow monk at a monastery in Pyin Oo Lwin, Mandalay Division. Photo via Irrawaddynews on Facebook.

The former president of Myanmar, Thein Sein, was ordained as a Buddhist monk Monday.

Four days prior to his ordination, Thein Sein was present to preside over a historic transition of power to the former opposition party, the National League for Democracy (NLD), headed by Aung San Suu Kyi.

According to a report from The Irrawaddy, the former president will spend five days at the Dhamma Dipati Monastery outside Pyin Oo Lwin, a town near Mandalay in central Myanmar.

A former army general, Thein Sein held presidency in Myanmar for five years until the recent takeover of the NLD. On March 15, Htin Kyaw was elected as president, establishing civilian rule and ending military leadership in the country.

Thein Sein’s stint as a monk will be temporary, as is common in the mostly Buddhist country; males are expected to ordain as novice monks in childhood and return to non-monastic life as adults. Thein Sein has not spoken publicly about his choice to become a monk, but an official statement from the Ministry of Information states it has been his plan since attending a Buddhist conference in January. At the conference, Thein Sein was supposedly urged to be ordained by the Myanmar’s most respected monk, Sitagu.