Stuck at home and sick of watching the same old stuff? The highly inventive and spiritually minded The Midnight Gospel (Netflix) is definitely not that. 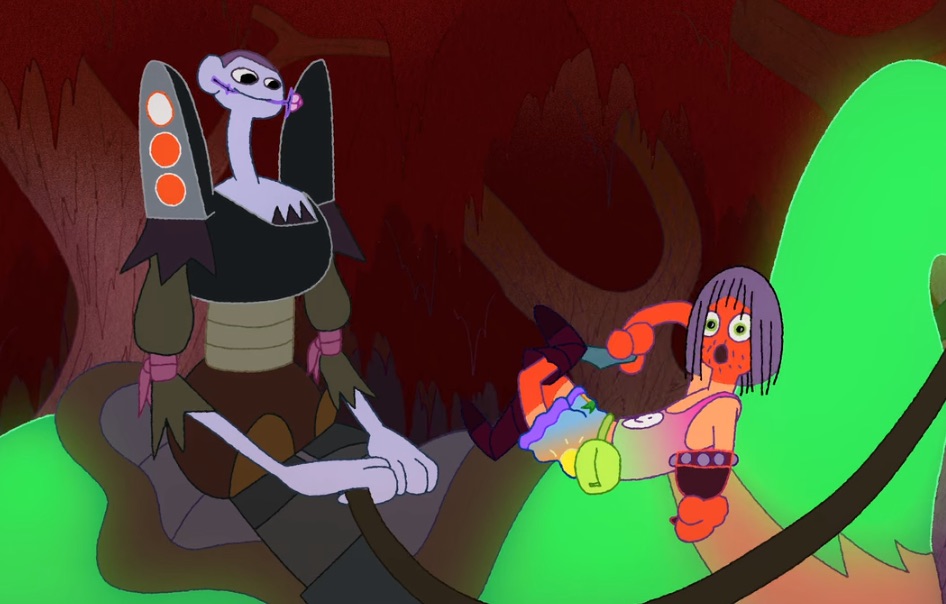 Made by Adventure Time creator Pendleton Ward and Duncan Trussell, the mile-a-minute mind behind the very successful Duncan Trussell Family Hour podcast, Netflix’s new show The Midnight Gospel is visually wild—psychedelic, fantastic, alive with bizarre characters. But it also hits, not too lightly, on subjects like meditation, mindfulness, and Buddhism. Just like any episode of the Family Hour might.

But this is not that, exactly. The Midnight Gospel, the show, takes its name not from a podcast but a “spacecast” recorded by one Clancy Gilroy (Trussell), for a subscriber audience of one. Things get weird fast in this show and the weirdness never stops, as Clancy virtually visits a series of alternate earths to record philosophical discussions with their denizens.

All manner of crazy things happen. But at the heart of it all is a grounded discussion on mindfulness, love, anger, resentment, listening, forgiveness, and even death.

Take Episode 1. The voices are Trussell’s and Dr. Drew Pinksy’s, and the talk is about mindfulness, Buddhism, weed, psychedelics, drug abuse, and health. Meanwhile, on-screen, the characters navigate a hyperkinetic, psychedelic animated fantasy realm loaded with color, cartoon zombie violence, shapeshifting architecture, and beings of every shape imaginable. Think Peter Max or Yellow Submarine, but on a lot of speed. It’s flat-out bonkers. It’s also pretty cool, for as long as you can hang with Trussell’s nonstop line of thought.

Then, in Episode 4, we meet Trudy—a wise badass who reads Rumi and rides a wraithlike horse/dinosaur hybrid. But this Trudy is also the Buddhist teacher Trudy Goodman, and she speaks personally, for example, about starting her real-life dharma community, InsightLA. The disconnect between what’s being said and what’s being seen persists: in the background, all manner of crazy things happen. (This show is bigger on depicting bodily parts and fluids than most, for example.) But at the heart of it all is a grounded discussion on mindfulness, love, anger, resentment, listening, forgiveness, and the certainty of death. Really! 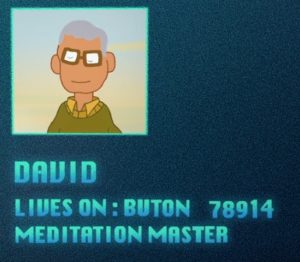 More dharmic talk continues in the second half of Episode 6—I have no idea what was going on in the first—in which Clancy converses with David, a meditation master who is, again, Buddhist meditation teacher David Nichtern in real life. But this David, of course, lives not on Earth but on “Buton 78914.” Clancy unleashes his rage (and a lot of cursing) at David, who responds by teaching Clancy about silence, stillness, and spaciousness. In turn, Clancy gains enough insight to be able to see, for the first time, the monkey who operates the switchboard inside his mind. We all have that monkey — although, in The Midnight Gospel, both the monkey and even the switchboard are as real as anything else.

Did I say the show is bonkers? Because I probably can’t emphasize that enough.

But if you’re stuck inside and want to try the exact opposite of the same-old, this highly inventive, weird, profane, joyous, and ultimately spiritually minded show might be just the thing. For you, and for your switchboard monkey.