A historical novel called Dharma Brothers: Kodo and Tokujoo by Arthur Braverman was recently released.  Although the novel is fictional for the most part, it follows the lives of Sawaki Kodo Roshi and Tokujoo (Kozan) Kato Roshi. 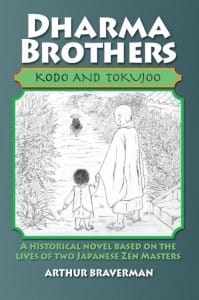 Braverman studied Zen Buddhism at Antaiji Temple in Japan for seven years with Kosho Uchiyama Roshi. Uchiyama was Kodo Sawaki Roshi’s main Dharma heir and quoted his teacher often in all his Dharma talks. Braverman wrote about Kodo Sawaki Roshi as one of the five teachers he featured in his memoir Living and Dying in Zazen. He also wrote about Kodo’s friend of 50 years, a Rinzai Zen teacher, Tokujoo Kozan Kato, whose fame spread throughout the Zen world as a humble farmer-monk with a deep understanding of the Dharma. Teachers from the severest Rinzai Zen monastery in Japan sent their top students to Tokujoo Roshi to have their skills honed by this unique monk in preparation for their own teaching careers. After writing about these two Zen giants, Kodo Sawaki and Tokujoo Kozan Kato, Braverman wanted to bring their teaching to a wider audience. Telling of their lives, friendship and search for enlightenment through historical fiction seemed to him the best way. That was the seed that grew into Dharma Brothers: Kodo and Tokujoo.
In the Spring issue of Buddhadharma we will be publishing a teaching by Uchiyama Roshi that was translated by Braverman.

More about the Book

Dharma Brothers: Kodo and Tokujoo is based on the lives of two Japanese Zen Masters, how they grew from two ordinary boys, walking very different paths, to become extraordinary men, and the deep spiritual bond between them. It is also the story of Japan from 1880 to 1965, of two personal accounts of Zen journeys to enlightenment, and of love and friendship. The story follows the lives of these two Dharma brothers, set against a backdrop of the Japanese-Russian War of 1905, and the rise of fascism in Japan in the 1930s. Kodo was an orphan, brought up in a harsh environment, while Tokujoo was the son of a well-to-do businessman. They both spent years studying in the most stringent Zen monasteries and became life-long friends. Each struggled to find his way clear of the circumstances in which he had been reared. Each sought a way of life offering more meaning and truth, ultimately becoming a different exemplar of Zen practice and living Buddhism.