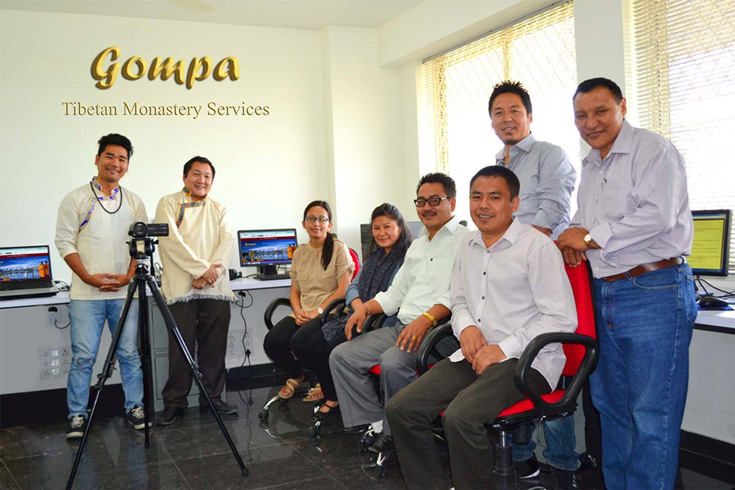 The Gompa Tibetan Monastery Services staff in Dehradun in 2014. Photo via Facebook.

Gompa Tibetan Monastery Services, a not-for-profit partnership between 47 monasteries and nunneries throughout India and Nepal, is aiming to connect people with classical Tibetan practice and culture.

With support from His Holiness the Dalai Lama and senior lamas from all Tibetan traditions, Gompa offers online educational resources, such as webcast teachings, puja ceremonies, and an online donation platform. So far, the platform has reached 4,000 people across the world, 2,500 of which have streamed teachings from prominent lamas and teachers.

“We wanted to set up a webcast channel that respects what is being taught,” said Gompa’s founder Graham Coleman.

“We didn’t want to put this on Facebook where posts and videos can be misused. We also taught our staff to film the teachings and empowerments in a disciplined way to preserve the nature of what we’re sharing with the world.”

Coleman says Gompa started as a multimedia project to record oral commentaries from senior lamas. The goal was to provide young lamas with a digital library of commentaries on Tibetan texts. Along the way, Coleman and his team realized that they could use this technology to help Tibetans who had left their country and missed their monastic communities connect with them. He decided to create an online service to help monasteries maintain close relationships with their community members, no matter where they are the world.

“Traditionally, all the services that a monastery offered were on your doorstep,” Coleman says.

“We wanted to maintain the relationships that these monasteries always had with their communities, now that their communities have spread all over the world. The simple idea was to use digital technologies to bring about that connection.”

Gompa started in 2014 with an office in Dehradun, India, where Coleman and a small group of staff began recording teachings at monasteries and nunneries. They later opened offices in Kathmandu and south India as the demand grew.

Gompa has recorded almost 900 hours of teachings and commentaries from 47 monasteries and nunneries. Live events are available to be streamed online and recorded copies are given to each monastery to serve as educational materials for future monks and nuns.

As a not-for-profit, Gompa is funded by the Orient Foundation and individual sponsors. Coleman says that all revenue that Gompa generates is dedicated to cultural preservation. They have donated nearly $125,000 to monasteries and nunneries to fund social welfare and environmental projects in their communities thus far.