Over the weekend, the New York Times published an item concerning a crowning achievement in the work of the late E. Gene Smith to preserve the vast body of Tibetan Buddhist literature under threat after the political upheavals of the 20th century: the opening of the document preservation department within the new library in Chengdu, China, that houses Smith’s archive of more than 12,000 volumes. 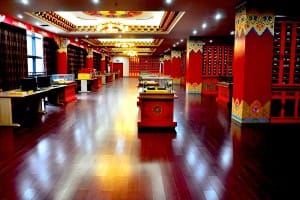 The institution itself, created to resemble a traditional Tibetan monastic library, opened in 2011 at the Southwestern University for the Nationalities and, remarkably for the location, was named after Smith.

“As part of the arrangement,” the Times reports, “Mr. Smith’s [Tibetan Buddhist Resource Center], based in Cambridge, Mass., provides salaries for the four archivists who spend their days scanning and cataloging texts that can be read free online. They aim to digitize the world’s known treasury of Tibetan literature within a decade.”

The piece says that Tibetans have already been showing up with rare texts, sometimes the only handwritten copies carefully hidden during China’s Cultural Revolution, to add to the archive.

Read the full report here (including video) about the E. Gene Smith Library in Chengdu and its document preservation efforts.