Latse Library will host the first celebration of Tibetan Calligraphy Day in New York on April 29. 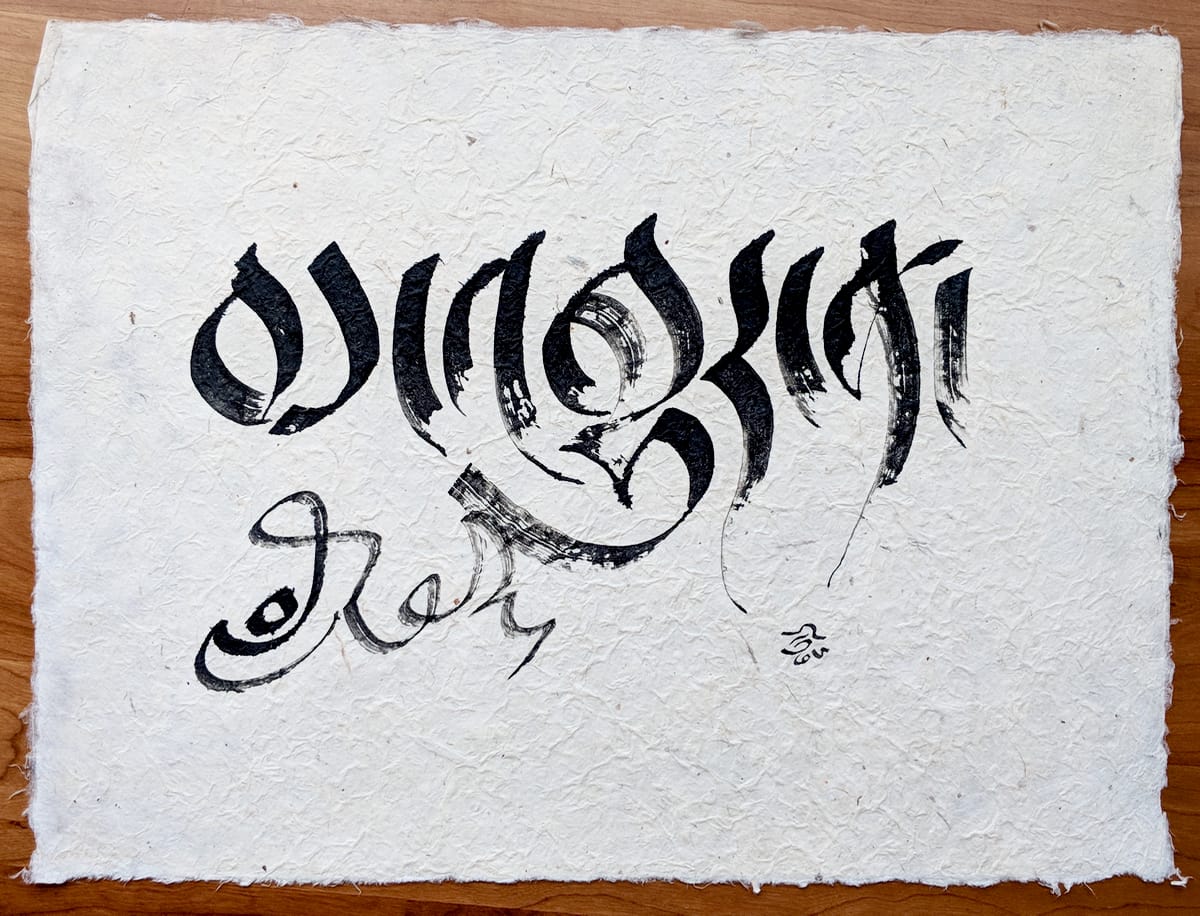 “The purpose of the festival is to share with a wider audience the treasures of Tibetan calligraphy,” said Kristina Dy-Liacco, librarian for Latse Library. “We aim to highlight the current trends in Tibetan calligraphy throughout the different regions of Tibet.”

Tibetan Calligraphy Day was created last year at a Tibetan calligraphy seminar in Xining, China, where attendees decided to celebrate the art form every year on April 30. The date was chosen because the thirtieth day of the fourth month matches the thirty consonants and four vowels of the Tibetan language.

This year, Latse Library will take part in that celebration on April 29 at Sherpa Temple in New York.

Along with a calligraphy exhibition, the event will include writing demonstrations and viewings of historic handwritten documents from the library’s collection, such as a letter from the 13th Dalai Lama.

“It’s a way we can show our support of an endeavor conceived and implemented by Tibetans in Tibet,” said Dy-Liacco. “This is a facet of Tibetan culture not often visible or explored in the West, but Tibetan handwriting and calligraphy is a highly respected, beautiful, and centuries-old cultural art form.”

While Tibetan calligraphy has a long, rich tradition, many calligraphers have also experimented with innovative and contemporary approaches.

“In Tibet, we are seeing a revival of Tibetan calligraphy,” said Pema Bhum, director of Latse Library. “There are more and more calligraphers who specialize in many different styles.”

One of the artworks featured in Latse Library’s exhibition is by Tashi Mannox, a Tibetan calligrapher who often uses a brush instead of a traditional pen and stylus. 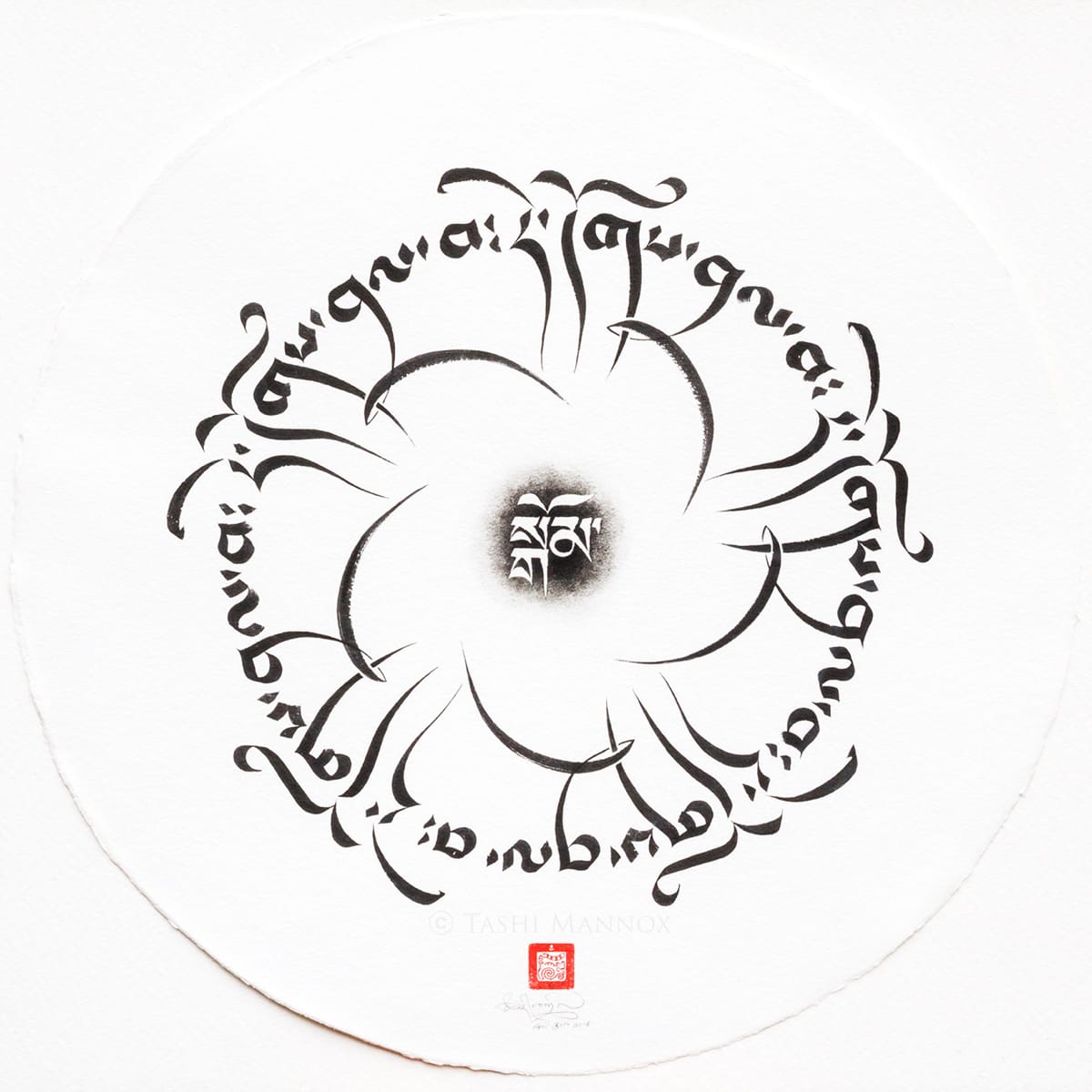 Mannox’s piece “Beyond Hope & Fear” features a revived Tibetan Drutsa script from the eighth century. The word sgom, which Mannox scribed five times to create a circle, means meditation that is practiced with no anticipation or apprehension.

“We can apply that to meditation, to every day, and to when we’re about to practice calligraphy,” said Mannox. “We need that fresh beginner’s mind as we‘re about to create. We should be without fear that it’ll go wrong and without hope for how it’ll turn out.”

Because both his parents were Buddhist, Mannox learned Tibetan as a second language from a young age. He ordained as a monk when he was twenty-two, apprenticed with a Tibetan master of Tengu painting and temple decoration, and acquired a job as a scribe copying ancient texts. When he left the monkhood in 2000 he chose to pursue a career in Tibetan calligraphy.

Based on his experience, Mannox believes the Tibetan written language should be upheld and shared as a “vessel of the dharma.”

“There’s a whole wealth of wisdom and knowledge within the Tibetan scriptures,” said Mannox. “We’re wary that the English language is a little clumsy to accommodate the finer points of Buddhist philosophy.” He believes learning to read Tibetan can help a practitioner navigate the intricacies of Buddhist texts.

For more information on “Tibetan Calligraphy Day in NYC,” visit Latse Library’s Facebook. Other calligraphers contributing to the exhibition include Khagang Chenbang from Labrang, Thangkar Tenpa from Rebgong, and Phuntsok Dhumkhang from India.

Tibetan Calligraphy Day will also be celebrated for the first time this year in India. According to The Week, Tibetan calligrapher Jamyang Dorgee Chakrishar will celebrate with Manjushree Centre for Tibetan Culture in Darjeeling.