When he encountered the bug, author Gabriel Cohen says, his first impulse was to destroy it. But then he stopped to think about the implications, and the situation quickly became more complex. 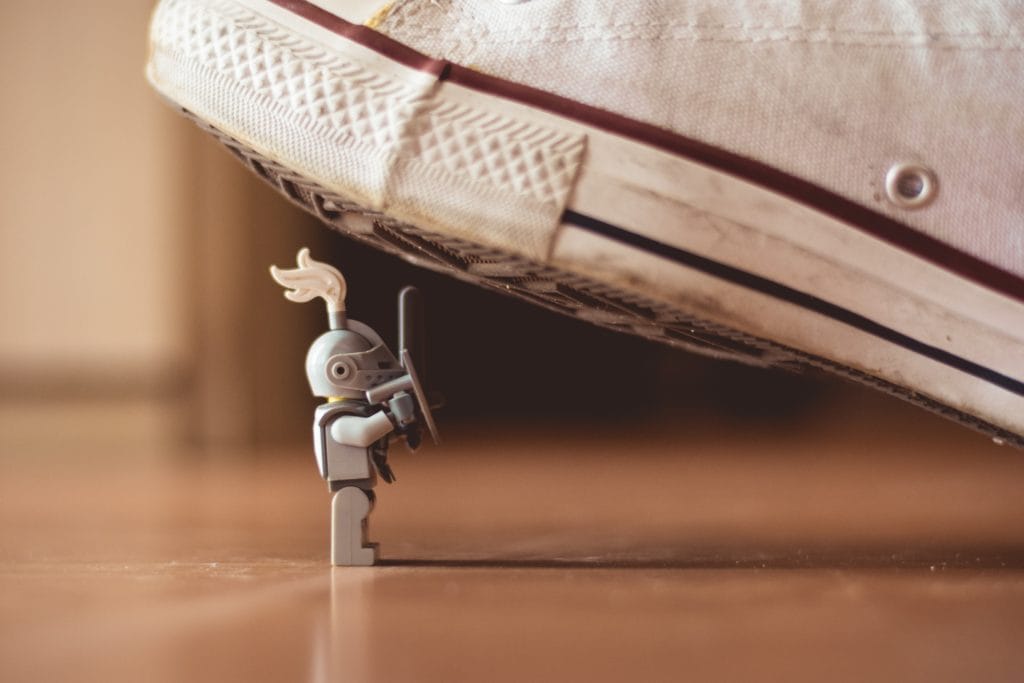 I get up in the middle of the night for a glass of water, pad into the kitchen, switch on the light, and there it is, perched on a cold burner of the stove. My heart jolts. The cockroach freezes like a fugitive caught under a police helicopter’s search beam—and then hurls itself into action, its six tiny legs pumping furiously as it scurries for cover. Unfortunately, this is not a rare happening; soon after I moved into this apartment, I discovered that it came with an all-too-lively problem.

Something primal overwhelms me and I want to KILL IT!, this nasty little invader of my space. Instead, I pause and think. Buddhism is all about becoming more aware. If William Blake could see a world in a grain of sand, why can’t I find an object for contemplation in this humble bug?

If there’s one thing I’ve learned from years of practice, it’s that the challenge is not about figuring out how to reach some distant exotic nirvana. It’s about getting better at dealing with the daily issues, the times when life presents us with moral quandaries, great and small. And this—believe it or not—is one of those times. Should I kill the bug or let it live? I’m the emperor of my kitchen: thumb up or down?

I realize, of course, that this may sound completely nutty. I’m not some fanatical animal rights activist. Heck, I’m not even a “pet person.” I don’t see animals as cute little stand-ins for people—I just see them as animals. And I realize that I could just buy a special little motel—Roaches Check In But They Don’t Check Out!—and my whole problem would be solved.

My tingling Buddhist “spidey sense” tells me that something about this situation deserves a deeper inquiry. When I regard this roach, I’m not calmly thinking, Hmm, here’s a minor household situation that might need to be dealt with. No—I’m flooded with an intense jolt of anger and revulsion. I’m thinking, How dare you invade my safe kitchen, you malicious little bastard?

When anger arises, it’s always a good idea to question what’s going on inside, rather than out. First of all, because I have chosen to occupy this apartment, is it inherently mine? Why is it my space, as opposed to the roach’s? And why do I believe that this little creature is threatening me? I even impute a malicious streak to it, as if it were inherently both vermin—noxious and objectionable—and villain.

When I look at things from the roach’s side, I see the wrongness of my view. This bug doesn’t wish me harm. It came out of the darkness into an open space, just seeking a bit of food, the satisfaction of its most basic needs. Then the light came on and a huge monster was standing there! From the roach’s point of view, I’m the menace; I’m the potential cause of suffering.

I think about sharks. I fervently wish I had never seen the movie Jaws. I can never swim in the ocean without imagining (dun-dun, dun-dun) some deadly beast rising toward me from the depths. However, while writing an article about a controversy over shark-fishing tournaments, I learned something that surprised me. Guess how many people are killed, on average, by sharks each year worldwide? Fewer than six. How many sharks are killed by humans? Somewhere between forty million and a hundred million. Yet, as we plunge into these creatures’ native habitats, we’re the ones who are afraid.

And when I probe my wrath toward the roach, I find—as I do with most anger—that it’s rooted in fear. Pretty odd. Though my chances of getting bitten by a shark are miniscule, at least it’s possible. But no cockroach has ever bitten off a human’s leg. So what am I afraid of?

I see myself as the center of the universe. I believe other beings are out to harm me. I impute all sorts of meaning where it doesn’t exist. For me and for the rest of the human race, such distorted perceptions cause a huge amount of damage.

For example, they lead to a twisted view of humanity’s place in the world’s ecology. They enable a callous attitude toward animals, which results in horrors like factory farming, in which we convince ourselves that animals can be treated as if they were just inanimate industrial products. I looked up my reference to a world in a grain of sand and discovered that it comes from Blake’s poem “Auguries of Innocence.” I was surprised to find that this work is about cruelty to animals.

He who shall hurt the little wren
Shall never be belov’d by men.

Blake shows that we are not so distinct from other creatures as we think.

The caterpillar on the leaf
Repeats to thee thy mother’s grief.

When we suffer, we can become more compassionate. Seeing suffering in the world set Buddha on his spiritual path. for me, it took a painful divorce. It opened me to some positive truths: as I hate to suffer, other beings also hate to suffer; and if I want to work toward lessening my own pain and the pain of others, I need to understand where all this suffering comes from.

A staggering amount of it comes from our own distorted perceptions. they lead us to distrust and hatred and violence. I ponder all the bigots in this world, feeling so threatened by other people just because of the color of their skin, or their birthplace, or gender, or sexual orientation. And my little cockroach even gets me thinking about genocide. The only way you can feel right about slaughtering other people is if you hold toward them a completely false view, one that is self-cherishing and non-empty. It seemed hugely important to the nazis to characterize certain people— Jews, gypsies, homosexuals—as inherently vile and inherently malicious. What was the metaphor they used? “Vermin.” I think, ultimately, that they were deeply afraid of these perceived aliens, which is odd because they held almost all the physical power.

I saw a gun shop recently that had a lot of stuffed dead animals. A pistol range offered a variety of posters you could use as targets, such as a latino holding a white child hostage, and a black man holding a white woman hostage. The message was clear: when they come for you, you better be armed and ready.

Once again, the people with the guns are the ones who are most afraid, and this fear arises out of a deep-seated sense of separation from other beings and the world. But here’s the profound message shared by Blake and the Buddha: it’s not people vs. bugs, whites vs. blacks, or even nazis vs. Jews—we’re all in the same boat. the cockroach wants exactly the same things I do: to avoid suffering and find happiness. Its idea of happiness may be a little less complicated than mine, but still, all beings share those fundamental wishes.

I stand here in the middle of the night, thinking. If there’s a problem, where is it? Is it in this little creature, or is it in the darkness of my own heart and mind?

Fine and dandy, you may well be thinking, but what about the roaches? You can’t just let them walk all over you. Indeed, in all practicality, I can’t give this kitchen over to colonies of bugs.

As often happens after I meditate and contemplate, I realize that life holds more choices than I first saw. I can kill the roaches or pretend they aren’t there, but life isn’t so binary, so “yes” or “no.” I have other options. I bought some citronella spray for my countertops, and then a bug vacuum I found on the internet. When I see a cockroach in my kitchen now, I scoop it up and then dump it—alive—outside.

I’m not even sure I’m doing the right thing. A friend suggests that by abdicating my role as top predator in my kitchen ecosystem, I might be causing the roach populations to overbreed. Who knows?

At least I’m trying to act better. It seems to me that the path to wisdom consists of an accumulation of small positive intentions and steps. It challenges us to be just a little less cruel, a touch more kind, a tad less angry, a sigh more patient. I realize that in one sense this whole issue may seem a bit silly: if I kill a few cockroaches, it will hardly have much impact on the state of the world. on the other hand, if every human being made a resolution to try to be a little more understanding of others, to inflict a little less suffering, imagine what a different place this could be.

Gabriel Cohen is author of Storms Can't Hurt the Sky: A Buddhist Path Through Divorce, as well as three novels, including The Graving Dock, a mystery with a Buddhist subplot. He lives in Brooklyn and likes to meditate next to a lake in Prospect Park.