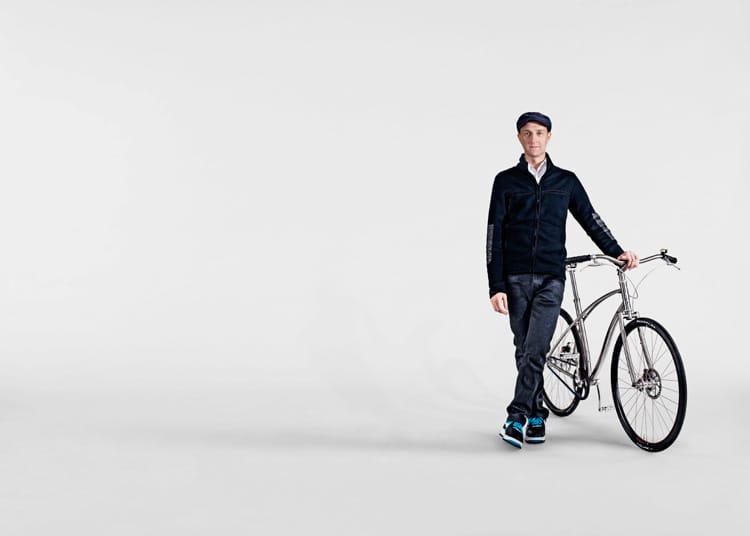 He’s a self-described geek, a non-stop creative, and a serial entrepreneur.

He’s made two award-winning films (93 Million Miles and Ultraviolet). His company, KidRobot, put the “designer toy” craze on the map, and some of his own such creations have found permanent homes in the MoMA. And in 2011, he launched Budnitz Bicycles, dedicated to building beautifully crafted, amazingly light and strong bikes.

Now, at forty-seven, he’s busier than ever, having launched Ello.co, a social network whose manifesto positions it as the anti-Facebook: “Not a tool to deceive, coerce, and manipulate—but a place to connect, create, and celebrate life.” But even as Ello grows and speculation about its chances for success swirl around him, Paul Budnitz still makes time to practice Zen meditation, as he’s done for years. Just after the much-chattered-about fall launch of Ello, he spoke to me about what keeps his gears turning. —Rod Meade Sperry

When did you realize that you loved to create, and that it could make for a good living, too?

I believe that beautiful things change the world and that belief was a motivator. As a kid, I always liked making stuff and I had a problem with authority, so I figured that if I ran my own businesses, I wouldn’t ever have to ask permission from anyone for anything and I’d get to make beautiful things. I’ve matured a bit since then, but create is what I do and what I know how to do.

As complex as some of your ventures have been, simplicity runs through them. For example, Budnitz Bicycles are a high-tech rendering of a classic, low-tech device. How do you balance being active in our increasingly high-tech world with giving yourself the time and mental space to create?

Creating, for me, doesn’t take any time. Whether it’s a new idea or a new inspiration, I don’t really need to give myself time to think. Some of that is a side effect of having a sitting practice for so long. I’m aware of the difference between inspiration—what seems to just arise—and the things that are more analytical. The willingness to use both gives you the freedom to create and then manifest that creation in the real world. A great idea comes from somewhere magic. I can’t say where. But the execution of that idea is nuts and bolt—it’s just hard work.

So, in relation to your work, it’s not so much that meditation helps you access creativity, but rather that it helps you to clarity?

To be honest, I don’t feel like I need to be more creative. [Laughter.] I’ll put it this way: I used to sit because I wanted to become enlightened—I thought that was some great, glamorous thing. Also, sitting calms me. And it does make life better. But at this point, it’s just something that I do. Sometimes, like anyone, I have a crap day and I’ve found that if I sit at night, I sleep better, so sitting is just practical and smart, but I don’t do it for any reason that has to do with my work. Meditation is part of my life now, embedded in who I am and how I act.

What led you to start meditating?

The same discontent that everyone else has. There was this terror that life is meaningless, that we’re exposed and vulnerable. I was looking for an escape from that sense of helplessness. 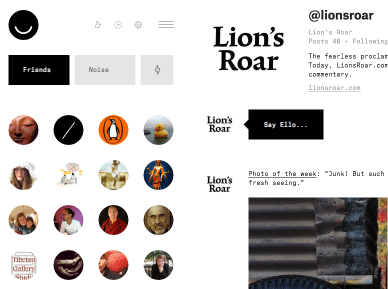 Lion’s Roar is on Ello. Click to see what we’re posting.

If there were a meaning to life that could be named, people would have found it by now. If life were totally meaningless, that would have been discovered, too. I live in Vermont, and today life feels completely full of meaning because it’s so beautiful—the leaves changing and all that. On other days, things seem totally bleak. We have to deal with those two opposing things, and I’m somewhere along the way to realizing that that’s okay.

You’ve been sitting for years. Would you identify yourself as Buddhist?

I wouldn’t. I identify as a human being. That’s partially because I read Dzongsar Khyentse Rinpoche’s What Makes You Not a Buddhist. Such a great book! The Vermont Zen Center is a few blocks from our house so—until I got really busy recently—I was biking up there and sitting often. I also sit some at home with my wife, and read a lot of Zen. I haven’t found myself attracted to the teacher thing lately, though.

Let’s talk about what’s keeping you so busy these days: Ello.co. It started as a private social network among you and some artist friends. But soon enough, all kinds of people were clamoring to join.

Someone just told us we’re the fastest growing site in history. I don’t know if that’s true. We’re trying not to count! [Laughter.] Our goal is not to become as big as possible, but to build a great community to whatever size it should be and then make a business out of it.

Why Ello and not Facebook or another social media network?

We don’t consider Facebook a competitor, or even a social network. Facebook is an advertising platform. It’s the same for all the ad-based social networks; the advertiser is the customer and the user is what’s being bought and sold. The result of being ad-based is that you are then motivated to get as much user-data as possible because the more you have, the more valuable those names are when you sell them to advertisers. Or, you might make your site more complicated to use, because the more that people click around, the more ads they can be shown. And then you’re motivated to put ads inside people’s streams so when we’re all talking to our friends about something personal, suddenly an underwear ad pops up. And then because of that, some posts by people we actually care about get buried by something that’s been paid for?

But Ello doesn’t have ads or sell user data. A reporter asked me yesterday, “What is the demographic of your users?” We don’t know. We don’t know their height, their sex, where they’re coming from—and we don’t need to. All we need to do is make a great social network, and that’s where all our energy goes.

What will it mean to be an Ello user?

A basic tenet of Ello is personal responsibility. The only thing we require to get on Ello is an email address and for you to follow our rules: general good conduct, no hate, no doing mean things. If you do mean things, we will nuke your account right away. Otherwise, however you wish to use Ello, you’re welcome to do that. And that’s led to beautiful stuff, such as people who are using Ello more like an art project than a social network where we’re all putting up pictures of our cats and our picnics. This one user, “DuaneKing,” is just putting up pictures of people in spacesuits and rocket ships. It’s like the most beautiful coffee table book you’ve ever seen! Another is just posting fields of color, like an Ellsworth Kelly painting. And then others are talking about their lives. It can be anything, really. It’s who we decide to present ourselves to be. And I think that’s a fairly accurate way to look at human beings.

Is that the guiding principle for Ello?

It’s one of them, yeah. It’s the same with Budnitz Bicycles. They’re made to last forever; a titanium frame will never rust or corrode. The guiding principle there was, rather than going out and buying a piece of junk—and then another and another until suddenly your garage is filled with rusting bicycles—why not buy one good thing, and take care of it? And then allow yourself to fall in love with it, and even to be heartbroken if you lose it? Disposability has environmental implications but there’s also the problem that when we buy things that are disposable we aren’t allowing ourselves to fall in love with them. Have you ever gone to a garage sale and picked up an old tool that’s clearly been used for years by one person, and it’s handmade, and they obviously oiled it and loved it? That principle goes behind our bicycles. They cost more, so there’s a greater sacrifice to own them, but then you get to appreciate them and, if you ever lose your bike, you get to be heartbroken. Which is a privilege—because you don’t get to be heartbroken if you don’t fall in love.

All this sounds nice, but you must have your naysayers.

I’ve seen a lot of cynicism, especially about the idea that we can actually build a website that’s not based on ads. But lots of people are bemoaning the fact that the Internet has become a big billboard. So we’ve come along and said, Hey, we can do this differently, and we’re willing to try. A whole lot of people have lined up with us, but still there’s this cynicism: “Oh, they’ll never do it.” But I have a long history of creating profitable companies. And that’s where we’re going.