Despite the 5,000 miles between them, death row inmate “Moyo” and pen pal Maria Jain have come together to showcase his series of Buddha portraits in the exhibition “Buddhas on Death Row.” 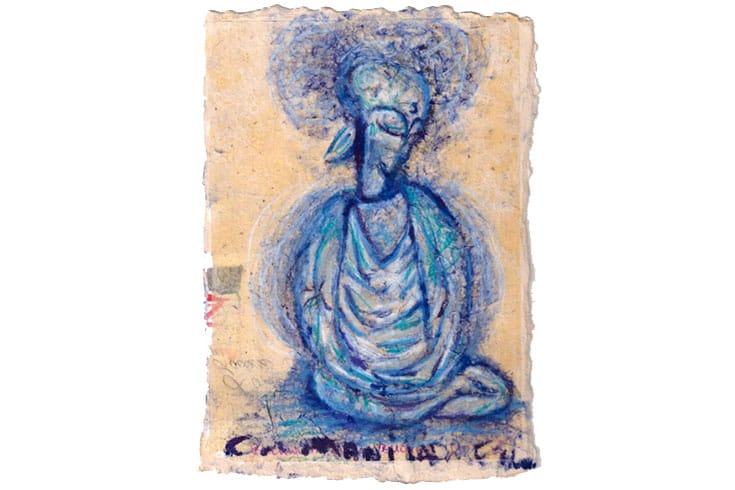 I Just Wanna Be An Old Yogi by Moyo, 2015. Imported blue ink and imported color pencil on hemp paper from Nepal, on prison-issued art board.

American Buddhist artist, Moyo, studies the image of the Buddha using a multitude of mediums. Purposeful strokes of prison-issued watercolor paint, jewel-toned ink, colored pencil, and crayon all come together to manifest his unique vision of the Buddha — almost always depicted with a delicate smile. He does this from his cell in solitary confinement, smaller than the average parking space, where he has sat on death row for the last sixteen years.

At the age of 18, Moyo was convicted of murder and sentenced to death. He has, he says, devoted the unknown amount of time left in his life to using his existence in “worthy ways” — creating artwork from pain, working to make a positive “ripple” in the world. This mission has manifested itself in an art exhibition, “Buddhas On Death Row,” passionately co-created and organized by his pen pal, and dear friend, Maria Jain. 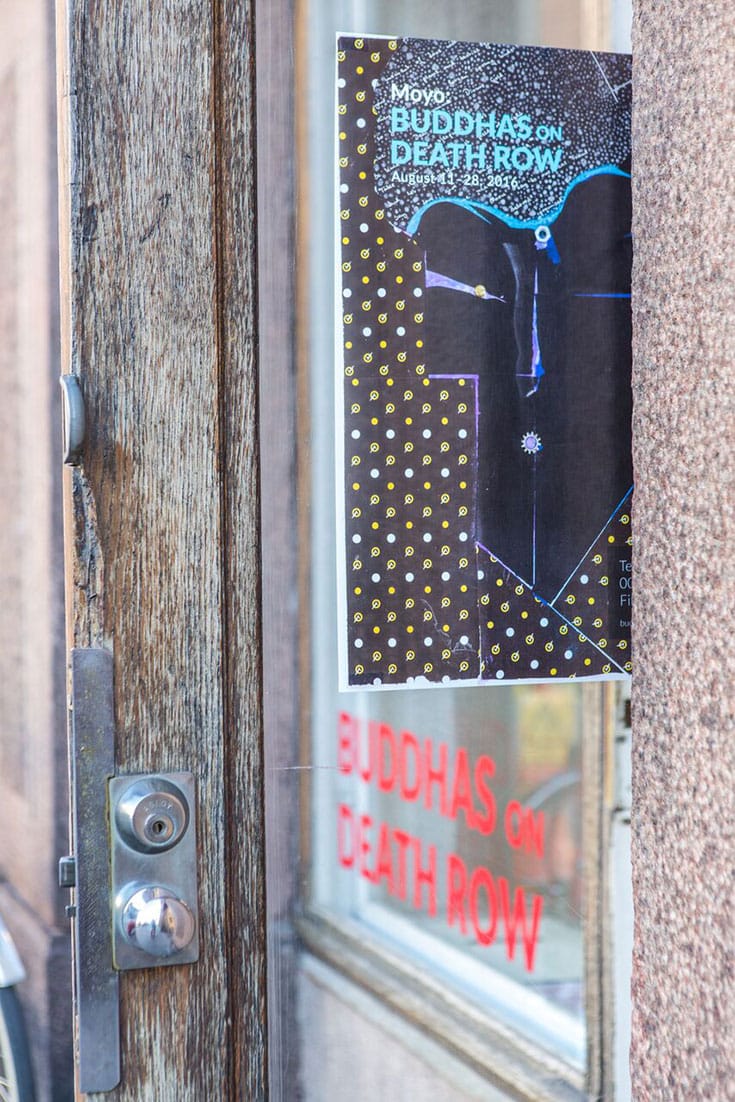 “Buddhas On Death Row” is “a series of Buddha portraits with accompanying reflections on suffering and happiness, conflict and peace, impermanence and eternity, ignorance and awareness.” The exhibition opened in August 2016 in Helsinki, Finland, over 5,000 miles away from Moyo’s cell in the U.S.

The friendship between Jain and Moyo is one of notable coincidence. In the Spring of 2014, Jain was browsing the internet when she found herself on the website for a program that connects pen pals with incarcerated individuals. The mission of cultivating positive contacts for prisoners resonated with Jain, so she explored further.

Jain came across Moyo’s profile, and was struck by both their similarities — and undeniable differences. Moyo and Jain are the same age, though in the same time that Moyo has been incarcerated, Jain has earned her degree, traveled the world, met her life partner, and pursued her passions. Both share strong interests in Buddhist practice, yoga, and travel.

“I was at a point in my own journey where I was intensifying my own practices and I was really curious to speak to someone who has had such a different life journey,” says Jain.

Jain wrote to Moyo, and from that first letter, a friendship, and “Buddhas On Death Row,” were born.

On a quest for self-discovery in prison, Moyo began reading books on African American history, art, psychology, and spirituality. He first came across meditation in the prison recreation yard when a friend, who has since been executed, taught him basic breath awareness and yoga asanas. In the following years, Moyo continued to learn about Buddhism, and meditation, and committed himself to a regular practice.

The handwritten letters between Jain and Moyo, sent with regularity across over 5,000 miles of land and ocean, served to settle curiosities about each other’s lives, and the two quickly became friends.

In a letter, Moyo shared with Jain that while holding a meditation retreat for himself in his cell, he came to the conclusion that he’d like to study the image of the Buddha through a series of portraits. 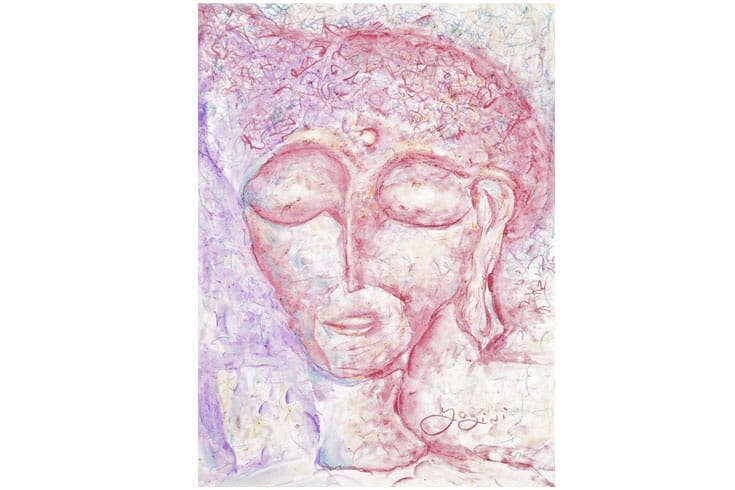 Yogini by Moyo, 2015. Color pencil on yupo. This is the first piece gifted to Jain by Moyo that inspired the idea for the exhibition.

“The first painting that I made on the final day of this retreat was a Buddha head, and for no other reason I was drawn to it. I liked how I felt making it, the shape of it felt good to my hand,” writes Moyo. “It dawned on me that I could continue to study this image and what it means, and maybe that would help me get closer to its essence. Maybe that would do something good for me, and in turn for someone else as well.”

Jain began receiving artwork from Moyo, whose moniker is a “brush name,” meaning “heart,” or “spirit” in Swahili. The two began to meditate together on a weekly basis, both sitting in their respective time zones at a scheduled time. The idea for an exhibition of Moyo’s art came to Jain during one of these sessions. She had never organized an art exhibition but things fell in place after Jain happened to reunite with an old friend she hadn’t seen in 15 years, now the director of one of Helsinki’s most prominent art galleries, who offered to help. 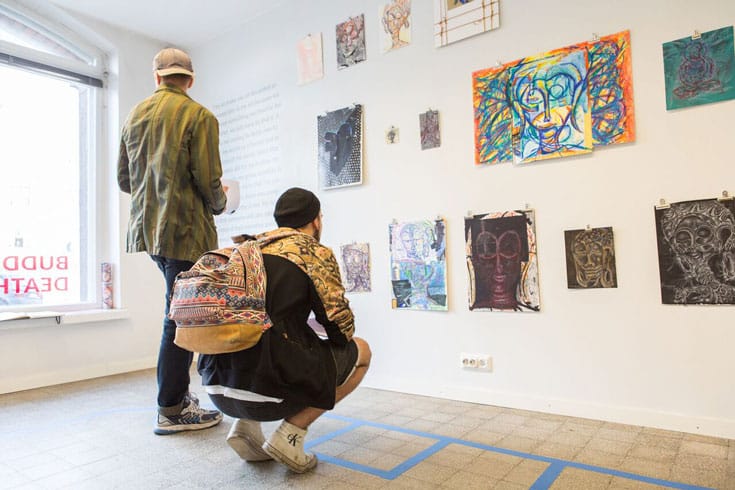 Moyo’s art hanging on the walls at “Buddhas On Death Row.” Photo via Maria Jain.

“There’s been a lot of good energy, and just effortlessness,” says Jain.

After a year of planning, done through many letters back and forth between Jain and Moyo, the exhibition opened to a crowd so large, that it was impossible to fit everyone in the space. Jain initially questioned how Moyo’s would be received, wondering, “How will an offering like this be received by people from someone who has committed such grave acts?” But, she says, “People really came with open hearts. There were many emotions, as they engaged with Moyo’s works.”

Visitors to “Buddhas On Death Row” left messages to Moyo in a guestbook, which Jain later would later send to Moyo. Upon reading the words written about his art, and to him, Moyo responded:

All this love and belief in me from all these lovely people who love so naturally and purely is having me ask “What is the real me?” Is it my closed-hearted moments or am I truly an endless river of free-flowing love?

I look in the mirror after hearing the thoughts of these lovely people, trying to see what they see. And I see it. I will do my best to pass this gift of awakening on to others… That’s key, right? To pass it on down the line, around and around? 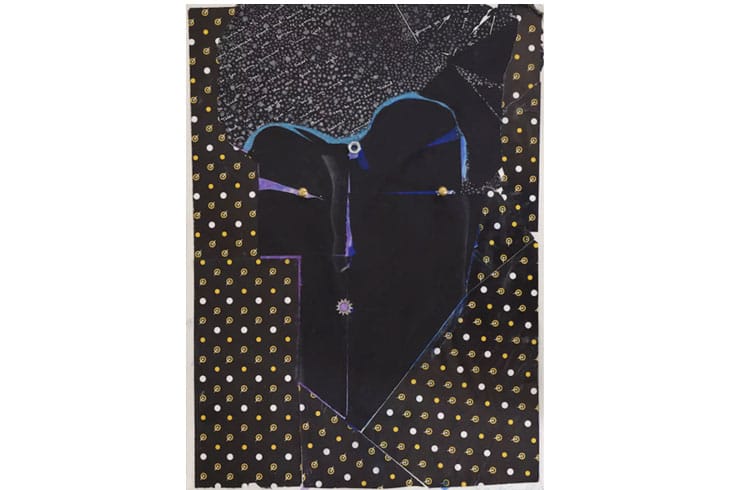 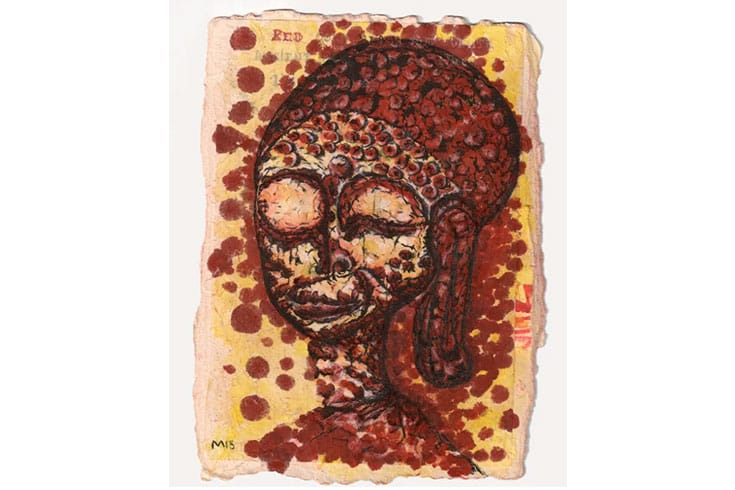 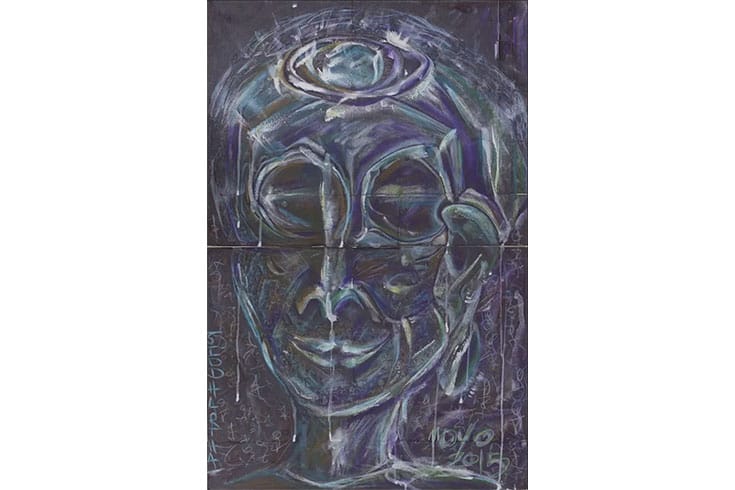 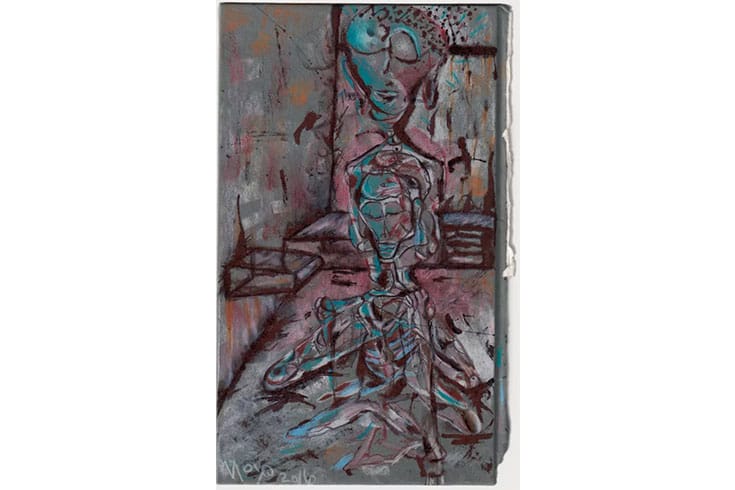 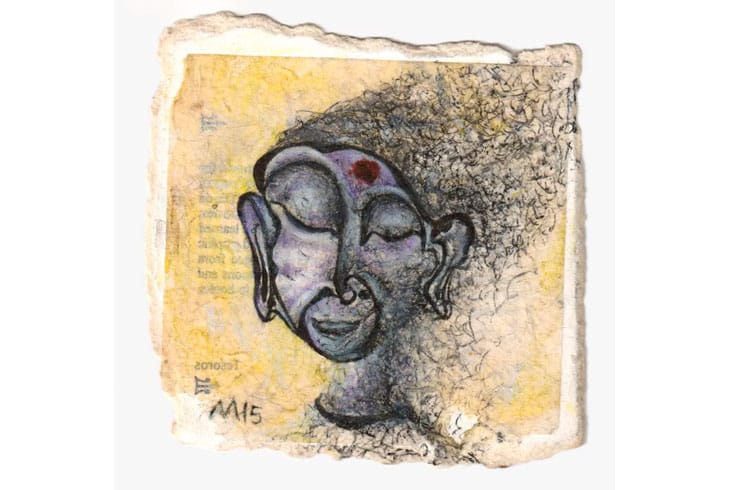 <
►
>
Release by Moyo, 2015. Import pen and ink, import marker and color pencil on handmade paper from Mexico. "There isn't a huge story about this one other than to say that isn't release a recurring theme in our lives, or should be? Sometimes, maybe this piece is telling me/us, the doubt is what you gotta let go of -- but that it is also so instructional.

Jain has a life outside of “Buddhas on Death Row,” working as an international development worker, but after the exhibition, she traveled to the U.S., where she and Moyo met for the first time – though separated from Jain by a sheet of plexiglass. Finally face-to-face, there were no words spoken. They began their meeting in silent meditation together.

“Those visit days were very meaningful, with deep conversations, laughter, and some tears, too,” she says.

If you don’t become a Buddha, who will?

Neither Moyo or Jain know how much time he has left, but they are determined to make use of it. “I have committed some grave acts in my life and I will never be able to undo them. Yet the very least I can do is to improve myself,” writes Moyo. 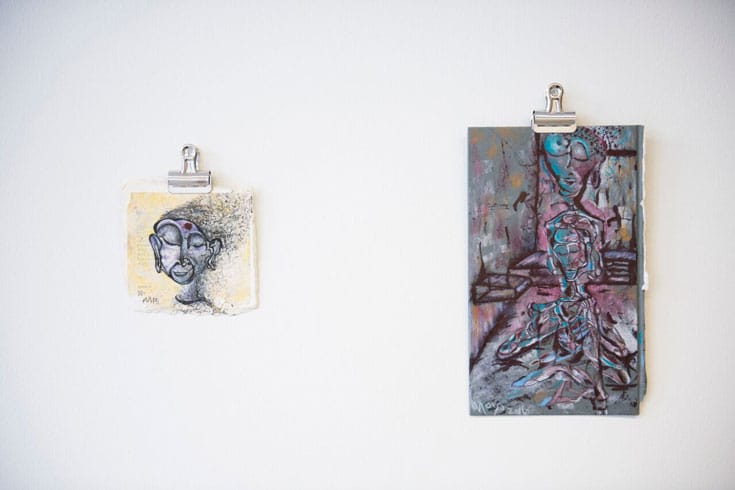 “Release” and “Healing” hang next to each other. Photo via Maria Jain.

Jain hopes that “Buddhas On Death Row” can also bring attention to the conditions prisoners face in solitary confinement, and draw attention to what she says is the illogicality of the death penalty. Moyo writes of this, too:

And the state says, ‘We will collect your life sometime after 6 P.M. on the specified date. This is a tragedy which we are playing out. This coming to death row as ignorant boys and becoming men of conscience, redeeming ourselves, falling in love with life, and dreaming constantly of the ways which we could and would love to more than anything, make amends for our sad misdeed.

It’s why I’m devoted to continuing my transformation, making art, the writing and rehabilitation course, working towards positive change in here and outside the prison. It’s a way of doing something that matters while we can, until something that doesn’t matter stops us.

On a bookmark Moyo sent to Jain after the opening of “Buddhas On Death Row,” he wrote, “If you don’t become a Buddha, who will?”

“This question, for me, is one of the biggest lessons I’ve learned from Moyo,” says Jain.