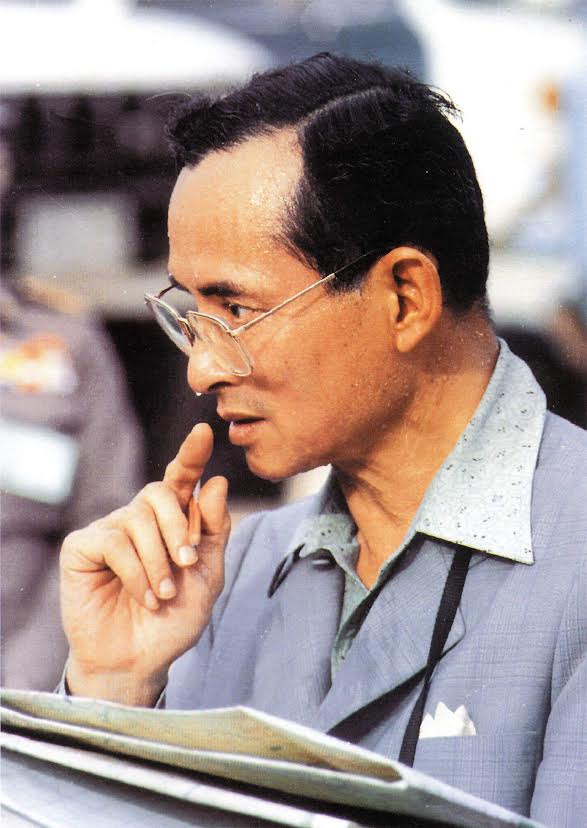 This famous photo of King Bhumibol is a favorite of the Thai people, who see it as emblematic of all the work he did on their behalf.

Monk-scholar Thanissaro Bhikkhu recalls the life and example of King Bhumibol Adulyadej of Thailand, who died at the age of 88 earlier this month.

The Buddha set forth the ideal of a righteous king — a Dhamma-raja — who rules generously for the benefit of his people, in line with the Dhamma, and in return is widely loved by the people he rules. Interestingly, the Buddha never taught this ideal to actual kings. Instead, he taught it to people at large, perhaps in hopes that once the ideal became widespread in the culture, kings would voluntarily respond by trying to live up to it. And although these teachings apparently had little immediate impact in the Buddha’s time, history is studded with a few shining examples of Buddhist kings who, in later centuries, took the deal seriously and tried to follow its guidance in the way they ruled.

King Asoka is probably the best-known example of a Dhamma-raja, but in modern times we have had the example of King Bhumibol Adulyadej of Thailand, who passed away recently at the age of 88. During the 70 years of his reign, he traveled throughout the country, often going to remote areas where Thai government officials had never been, to learn of the hardships of his people and to see what he could do to help. As he said in interviews with foreign journalists, he regarded his people as members of his family, and he sincerely wanted to see them prosper. The royal projects he initiated to improve crops, to bring medical care to remote areas; to provide wells, dams, and canals; to seed clouds to bring rain, and to otherwise aid in the quality of life for Thai people: These number more than four thousand. And although he often provided immediate necessities during disasters, his focus was primarily on finding ways to get poor and underprivileged people to be able to stand on their own feet: the wisest form that material generosity can take.

Perhaps more important than the individual projects, though, was the overarching sense of security and stability that he gave to Thailand during a period when countries all around it were falling apart. The fact that a sincere, well-intentioned person, earnestly trying to do good for his people, was the head of state gave Thailand what every country needs in order to be stable: something clearly good at the heart of the nation that everyone can honestly respect. Despite the external forces eager to destabilize Thailand over the past decades—whether from Communism or international capitalism—the fact that the country has had someone to unify its heart has enabled it to stay intact. Small wonder, then, that Thai people have expressed their grief over the King’s passing in such large numbers and with such obvious sincerity.

We here in the West also owe him an immense debt of gratitude. If Thailand had fallen to Communism when Vietnam, Cambodia, and Laos did, who knows what would have happened to the Thai Forest tradition? The Dhamma of such teachers as Ajaan Mun, Ajaan Lee, Ajaan MahaBoowa, and Ajaan Chah might never have been known outside of a small circle of Thais. Those of us who were fortunate enough to train directly under the Thai ajaans would have lost the opportunity of a lifetime.

The international media have, by and large, been treating King Bhumibol’s passing with a strange mixture of condescension and embarrassment. It’s as if journalists can’t believe that a head of state would actually have been earnestly good, and that people are not being childish when they show their grief for a lost leader so sincerely. All too often, the media judge the King’s actions against Western ideologies, and fault him for being inconsistent in his support of Western-style democracy—not pausing to reflect that, over the past century, they themselves have been very inconsistent in their attitude toward democracy in general and Thai stability in particular. Perhaps the King was being very consistent in doing what he felt best for Thailand in the long run as external conditions changed.

Even more deeply, though, the attitude of the media reflects something seriously awry in our culture: the inability to believe that a person in power can be earnestly good. Even the ideas of earnestness and goodness are treated with irony as things to be framed with quotation marks. This lack of trust in the power and possibility of goodness has had a corrosive effect on our own ability to do good. Instead of looking down on Thailand, perhaps we should look up to her late King for an example of how goodness can bring stability and peace to the people of the world.