Danny Fisher in conversation with the Sarah Wilkinson, one of the Buddhist Literary Heritage Project’s American Ambassadors. 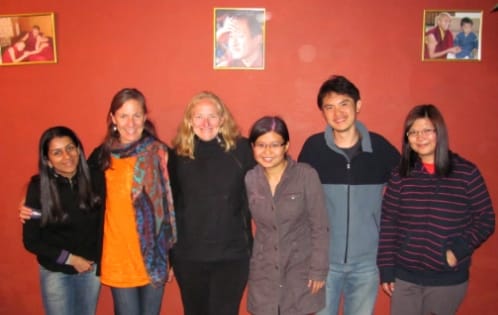 More than a year ago, the mighty Dzongsar Khyentse Rinpoche and his Khyentse Foundation organized the Translating the Words of the Buddha Conference —a five-day conference attended by more than fifty Dharma translators, teachers, scholars, students, and patrons that was held at Deer Park Institute in Bir, India. During the conference, the assembled group “pledged to translate the entire collection of Buddha’s teachings and commentaries into English within 100 years.” Shortly thereafter, in January of this year, the Buddhist Literary Heritage Project officially began to operate.

Though the project is still in its early stages of development, I wanted to know more. So I spoke to Sarah Wilkinson, one of Project’s official American ambassadors, at University of the West—where I’m a professor in the Religious Studies department, and Sarah is a student in the Psychology program. Our interview follows here.

Sarah, would you please explain the Buddhist Literary Heritage Project for those who aren’t familiar with it?

The Buddhist Literary Heritage Project is a project that evolved from a conference hosted by the Khyentse Foundation in March 2009. Obviously it was conceived of prior to that date, but that’s when fifty translators, scholars, and lamas met for the “Translating the Words of the Buddha” conference at Deer Park Institute in Bir, India, just outside of Dharamsala.  The idea was to get together to try to figure out exactly how to go about translating all of the Buddha’s teachings, with a more urgent focus on those that are only available in Tibetan right now. Knowing that the language has changed a lot and is kind of dying off, there’s a sense of urgency about getting these Buddhist texts translated. Some of these teachings are only available in Tibetan, and only five percent of what’s in Tibetan has been translated into English thus far. Some of these texts have been translated into Chinese, but only about 15% of those have been translated into English.

So there are many, many teachings of the Buddha only available right now in Tibetan—and Classical Tibetan at that, which relatively few people can understand at this point. So we’re trying to make sure that great lamas and qualified translators get together to both train new translators over the next couple of decades and make sure that these teachings of the Buddha are made available to everybody before it’s too late. This is a long-term project and is expected to take 100 years. Actually, I believe the ultimate goal is to get English (to begin with) translations of all the Buddha’s teachings, whether from translations in Tibetan, Sanskrit, Chinese, or Pali, into a single, user-friendly database for the use of scholars and practitioners alike.

You talked a little bit about the changing quality of the language, and the difference between classical and colloquial Tibetan. Would you say a little bit more about that and how it relates to the urgency of the project?

I’m not a scholar in the area, but the difference between Classical and Colloquial Tibetan has been likened to the difference between Chaucerian English and contemporary, everyday spoken English. Chaucerian English is difficult for your average person to comprehend—it takes some advanced, scholarly knowledge. The same is true with understanding classical Tibetan. You have to have this advanced, scholarly knowledge to translate these texts. It’s hard. This stuff is difficult to comprehend. It requires a lot of analysis just to verbalize what’s being said on the page. You really have to study and have your hand held to get through the density of some of these texts.

That strikes me as a helpful analogy: Classical Tibetan is like Chaucerian English.

I used to say that it was like Shakespearean English… until I was corrected. (Laughter.)

I think we’re probably already getting a pretty clear sense of this, but if you had to explain why this particular project is such a priority, what would you say? Why is it so important?

Well, again, it’s just the very fact that many of the incredible lamas who have escaped Tibet are dying off. If we don’t build up these translation and editorial resources now, there’s a chance this material could just disappear. Luckily, we have projects like Gene Smith’s Tibetan Buddhist Resource Center that are actually capturing in digital form what is available now in the very fragile pecha form. But that’s just the first step. We have to make sure this material is translated properly.  There aren’t a whole lot of people, universities, institutions, etc., that are teaching Sanskrit or Tibetan—especially Classical Tibetan. It’s a niche area right now. Another issue is that, as I understand it, as it stands now there may be translators on opposite ends of the world working on the same translation unbeknownst to each other. The hope is to create an infrastructure that will allow translators to communicate and collaborate to avoid this kind of doubling up.

Sarah, when I first met you I was interested to learn of your title with the project: you’re one of the “American ambassadors” for the Buddhist Literary Heritage Project. Would you tell us a little bit about the structure of the organization and the nature of the work that you and other ambassadors do?

The Buddhist Literary Heritage Project is still in its infancy, and we’re hoping that we will eventually have ambassadors all over the world. Right now we have seven countries represented. There are three-and-a-half ambassadors in America right now—one of us, James Hopkins, spends part of the year in Nepal. There are also various committees that meet about specific matters. But right now the main people involved are the translators and the executive director, who refer to themselves as “the working committee,” as opposed to “the board of directors.” Part of the reason for this is that they’re ‘interim’: Dzongsar Khyentse Rinpoche, who is the interim Chair of the project, and all of the committee members feel very strongly about this being a Buddhist-wide project—not limited to any particular lineage or group. They want it to be inclusive of everyone interested in the Buddha’s teachings, and that includes non-Buddhists as well.

Our main job right now as ambassadors is to help spread the word about the project and to find founding sponsors. We’re looking to raise $5 million in seed money over five years. Founding sponsors will be those who give or pledge to give $50,000. The seed money will help us cover various costs, including incentivizing translators. Though most of us are volunteers, the project is committed to financially sustaining these translators. We’ve already raised more than a quarter-of-a-million dollars, so we’re on our way. Additionally, some of the ambassadors have helped with writing and editing some of the promotional materials, etc, and helped to strategize about fundraising.

How did you personally become involved as an ambassador?

I volunteered to help Rinpoche, and started doing a bit of work for the Khyentse Foundation just as the conference was happening.  I’ve had a bit of experience with fundraising for a few non-profits, some related to Buddhism or Tibet. I had expressed enthusiasm for the project, and I think my name was submitted as someone who’d be interested in helping out.  (Laughter.) I’m honored to be involved and help with the Buddhist Literary Heritage Project.

Are there any big events or developments on the horizon?

We really are just getting started. We have Milton Glaser working on our branding. [See more on Glaser and the Buddhist connection here.] We may actually be changing the name of the project soon. We’ll know in the next couple of months.

We have one pilot translation finished, and two more almost completed. There’s also a thoughtfully organized, prioritized list of sutras and tantras to translate. We’ve got two extremes: the ones that are most frequently cited and used by all kinds of Buddhists, and the ones that are just in Tibetan and most at risk of being lost with the language.

In the next couple of months, we’re also launching the grant application for those translators who are interested in participating. They’ll be able to see what the process is, what their compensation will be exactly, what are editorial processes are, and so on.

This is exciting: We are going to be announcing online soon how individuals can sponsor the translation of a single page.  So people out there who are reading could be personally responsible for translating—and thereby preserving—a page of the Buddha’s teaching!