Danny Fisher speaks to Dr. Ananda W.P. Guruge about the Buddhist flag and its significance in celebration of the 125th anniversary of this important Buddhist symbol. 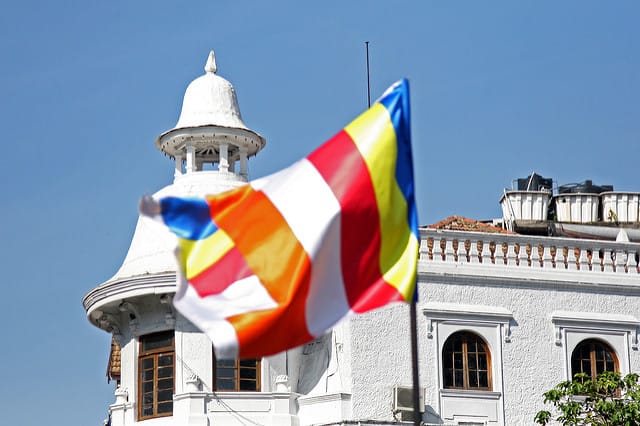 Last month saw the 125th anniversary of an important Buddhist symbol celebrated at a gala event in Sri Lanka. The symbol? The international Buddhist flag (pictured).

A common sight at Buddhist temples across the globe, the banner is unique as an emblem shared by Buddhists of all traditions. Originally created by J.R. De Silva and Henry Steel Olcott to mark Sri Lanka’s Buddhist revival in 1885, the flag was accepted by the World Fellowship of Buddhists in 1950. For more on the flag, I spoke to my University of the West colleague Dr. Ananda W.P. Guruge.

The emeritus Dean of Academic Affairs, Director of the International Academy of Buddhism, and editor of Hsi Lai Journal of Humanistic Buddhism at our illustrious institution, he has also served as Vice-President and Liaison Officer to the United Nations and UNESCO for the World Fellowship of Buddhists; Chairman of the World Buddhist University Council; and Patron of the European Buddhist Union. In addition, he is the former Ambassador Plenipotentiary and Extraordinary of Sri Lanka to UNESCO, France and the USA (1985–1994), and former Special Adviser to the Director General of UNESCO (1995-2000). 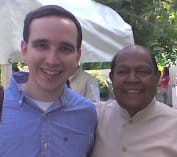 We spoke in my office at UWest.

Dr. Guruge, when you and I were talking about the anniversary of the Buddhist flag recently, you said to me that you thought this was a holiday that Buddhist Americans should be more aware of. Would you please say more about why?

The reason is that it’s an important contribution to the Buddhist world that was made by a remarkable American man. He came to Sri Lanka in 1880, and his name was Colonel Henry Steel Olcott. He came to Buddhism after practicing with the Theosophical Society, and organized the Buddhists in Sri Lanka to agitate for greater recognition of their religion. (Sri Lanka was a British colony at that time, you see.) Among other things, he managed to get the Buddha’s birthday recognized as a holiday in 1884: he was worried about violence that occurred between Catholics and Buddhists in 1883, and went to London to argue that the British had been at fault and that the recognition of the holiday might help relations.

But then he thought, “This is not enough. Buddhists must have something to rally around. We must have a flag!” At the time, there was a Buddhist pennant—hung vertically, like a banner—with five color bars and a sixth bar of the same length incorporating all those colors. What Col. Olcott did was he cut one down, and said, “There. Now this is a flag.” So if you can imagine the current Buddhist flag with that last multi-colored bar stretching out another two feet—that was the original pennant.

Wow! I never knew that part of the story.

Then, in 1950, when the Buddhists of the world first organized themselves through the World Fellowship of Buddhists, they passed a few resolutions right at the start. One of those was to accept Col. Olcott’s flag as the flag for Buddhists around the world. So we are celebrating not only the 125th anniversary of the Buddhist flag, but also its 60th anniversary—its Diamond Jubilee—as the universal symbol for all Buddhists.

For the benefit of our readers who may not know the context here, would you please say more about the significance of the Theosophical Society in terms of Sri Lanka and Buddhist history at the time of the flag’s creation?

In the 1870s, back in the U.S.A., there was a great spiritualist movement. People were fascinated with seances and contacting the dead and so on. Col. Olcott, who was working as a journalist then, was investigating and testing the interests of many in spiritual and occult matters. This brought him into contact with a woman named Madame Helena Petrovna Blavatsky. Somehow or other, the two of them became friends and they wanted to examine, among other things, whether Christianity was serving the purposes of people at the time, and if they were alternative belief systems to be explored.

In 1875 they founded the Theosophical Society wondering if they might create such an alternative philosophy that people could rally around, or if they could borrow things from other cultures that might be relevant to the American culture of the 1870s. Then in 1878, the two of them went to India and established a center there and tried to work with Hindu teachers there. Two things happened: first, the person they were relying on the most passed away suddenly. Second, they found the whole Indian situation too big to handle.

Both of them had been very interested in Buddhism based on what they had studied in books, and so Col. Olcott suggested that they go to Sri Lanka in 1880. They ultimately decided to become professed Buddhists, and went through the ritual of taking the five precepts.

They identified themselves primarily with the Buddhist revival movement that was already going on in Sri Lanka, and there were lots of debates and controversies and so on with the Christian population there about this. Their identification with this movement is not surprising since their initial interest in Buddhism came as a result of reading an account of a Buddhist-Christian debate that occurred in 1873. In that year, at the capital, Columbo, the Buddhists and the Christians had a major debate. An American journalist named P.M. Peebles happened to be there, and he wrote eight articles for a local newspaper that he later published in book form in America as The Great Debate: Buddhists and Christians Face-to-Face. Col. Olcott and Madame Blavatsky had read this, and that was the spark of their interest—enough to convince them to come all that way to study Buddhism.

Among Col. Olcott’s most important contributions to Buddhist history, I would identify three: First, he composed a Buddhist catechism in 1881. The Buddhist Catechism is a very small, tiny little book of five sections, and answers questions like, “What is Buddhism?”, “Who was the Buddha?”, and so on. That book and a poem by Edwin Arnold, The Light of Asia, published in 1879, were for a long time the only works that Western readers could look at and get some idea of what Buddhism was. Second, he told the Sri Lankan people, “If you want independence, you need national leadership, and that can only be brought about by education in English.” So he helped to set up a number of schools that really helped the people of Sri Lanka work towards independence, which served the culture there. Third, he wanted to help bring about understanding between the various schools of Buddhism. In 1894, he prepared a platform of fourteen points on which all Buddhists could agree. He went to Japan, Korea, Mongolia, and all these places to get Buddhist leaders to agree that Buddhists agree on these points. Ecumenical work among Buddhists in the modern world can in many ways be attributed to Col. Olcott.

Today, there is no town in Sri Lanka where there is no memorial for Col. Olcott. Half-a-million people arrive at the railway station in Columbo for work in the morning, and they all pass by a statue of Col. Olcott. Many schools are named after him. If you meet a Sri Lankan child named Olcott, you know he comes from a very pious Buddhist family. That is what Olcott is to Sri Lanka.

I know there’s a somewhat detailed explanation for the design of the Buddhist flag, but are you able to say something about its basic meaning?

There was a belief that from the Buddha’s body emanated an aura, and that aura consisted of the colors blue, yellow, red white, and orange, as well as a mixture of all those colors. There was a desire to graphically represent this, hence the present design.

There have been a couple of news stories about celebrations of the flag’s anniversary all over Sri Lanka. Would you say something about what’s happening at these celebrations?

It is a government-sponsored occasion. They’ve issued a stamp and produced television programs and so on. There will be a special, important meeting and discussion about the flag and what Col. Olcott did for the country. There will be many opportunities for the nation to express gratitude to Col. Olcott. We do this every now and then, when there’s a big anniversary or one of the schools has a centennial or something. Olcott Day has been observed by many of the schools he founded and others–I should add, by the way, that I’m a product of his school in Kandy! Basically, this will be another well-organized, well-celebrated Olcott Day. Sri Lanka is a nation with a great sense of gratitude to people who have served the country—not asking where they came from. If they served the nation, they need to be gratefully remembered.