At the recent May We Gather memorial, offered in support of the Asian American community after March 16th’s Atlanta shootings, Bhante Sanathavihari spoke about our capacity to develop wisdom and compassion even in the face of the unbearable. Read this article in Spanish here. 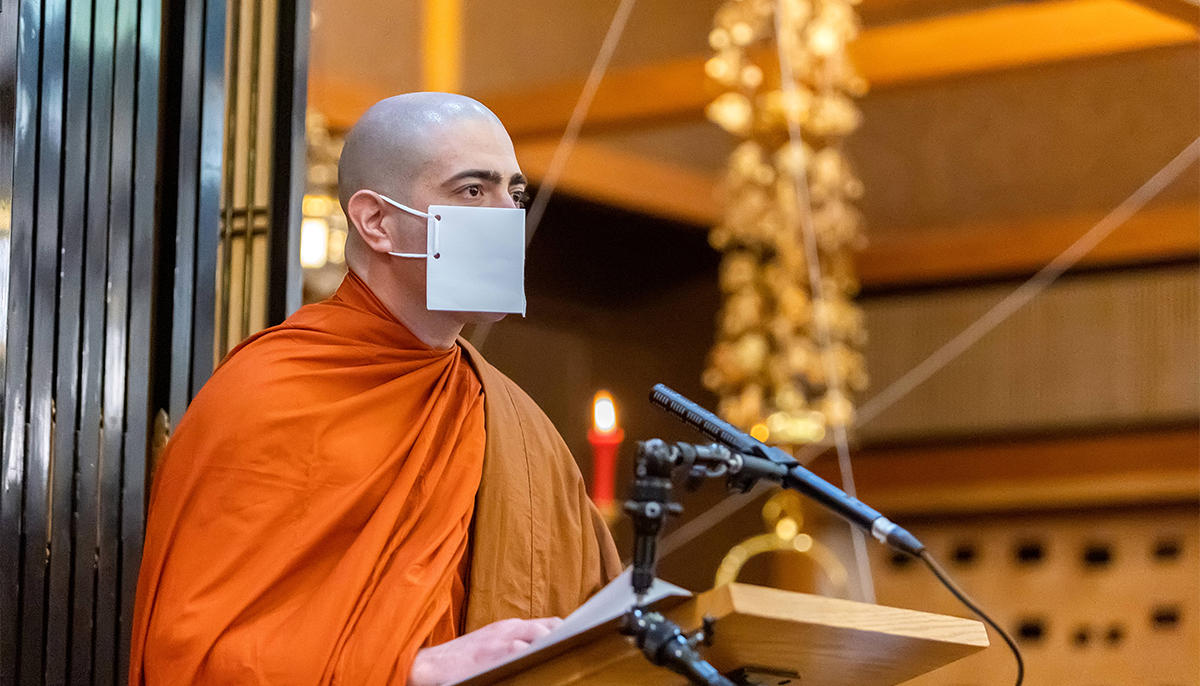 On May 4, 2021, the Higashi Honganji Buddhist Temple in Los Angeles’ Little Tokyo hosted May We Gather: A National Buddhist Memorial Ceremony for Asian American Ancestors.

The event, livestreamed to an audience of thousands, commemorated the 49th day after the murder of eight people in Atlanta, Georgia, six of whom were Asian American women. It was another example of the increased racialized violence against Asian Americans during the COVID-19 pandemic.

I felt it was my duty to call out to my other Latin American people…to get involved in eliminating anti-Asian [hate] and to stand up [and] defend our Asian brothers and sisters. — Bhante Sanathavihari

Bhante Sanathavihari delivered a dhamma talk on the paramita of patience (kshanti) in Spanish with English subtitles. He is a resident monk at Sarathchandra Buddhist Center, a Sri Lankan Theravada temple in North Hollywood, California.

Bhante Sanathavihari, a Mexican American, grew up in Los Angeles’ Koreatown and serves Sri Lankan American and Latinx communities. He says, “I felt it was my duty to call out to my other Latin American people…to get involved in eliminating anti-Asian [hate] and to stand up [and] defend our Asian brothers and sisters. This talk was my attempt to reach out to the Spanish-speaking people of the world.”

Watch Bhante Sanathavihari’s talk here, or read a transcript below:

Hello and Greetings, Venerables,
Brothers and Sisters in Dhamma,
Friends around the world.

We are gathered here today in solidarity with our brothers and sisters in the Asian community. Recent events force us to do what is most difficult to do, which is the practice of khanti [Sanskrit: kṣānti], patience.

On one occasion the Blessed One said, “Khantī paramaṃ tapo tītikkhā nibbānaṃ paramaṃ vadanti buddhā,” which means “‘The greatest austerity is patience and tolerance; Nibbana is Supreme,’ say the Buddhas.” Let me clarify: Patience is not compliance, nor is it a call for inaction. However, it is an effort to see things clearly in a difficult situation. Patience allows us to apply wisdom and compassion in the face of the unbearable. It gives us the opportunity to respond skillfully rather than unconsciously.

For example, in the Samyutta Nikaya, the Buddha tells of an ancient battle between the gods and the Titans during which the gods were victorious and the King of the Titans, Vepacitti, was captured and imprisoned. When the king of the gods, Sakka, visited Vepacitti in prison, Vepacitti “abused him and reprimanded him with harsh and rude words,” to which Sakka did not respond
in the same way. Subsequently, Sakka’s driver asked Sakka about this, expressing concern that some would see Sakka’s response as a sign of fear or weakness. Sakka replied:

“It is not out of fear or weakness
That I am patient with Vepacitti.
How can a wise person like me
Engage in combat with a fool?

… Of goals that culminate in one’s own good
None is better than patience.

He practices for the welfare of both,
His own and the other’s,
When, knowing that his enemy is angry,
He consciously keeps his peace.

When he achieves the cure of both,
His own and the other’s,
The people who consider him a fool
Are inexperienced in Dhamma.”

The Buddha, after sharing this account with his disciples, praised Sakka for his “patience and kindness.”

I know that it may seem impossible and even ridiculous to propose patience as an answer to all this hatred that we are experiencing. But I think that “Yes, we can!”

Mihiri Tillakaratne is an associate editor at Lion's Roar. She is a PhD Candidate in Ethnic Studies and Gender, Women, and Sexuality at UC Berkeley, where she studies embodied memory in the Sri Lankan diaspora. She has a M.A. in Asian American Studies (UCLA) and a M.A. in Ethnic Studies (UC Berkeley).  Mihiri is the director of I Take Refuge, a documentary on Sri Lankan American Buddhist identity, and the founder of Sri Lankan Americans for Social Justice.