In the opening editorial of the July 2019 issue of Lion’s Roar magazine, editor-in-chief Melvin McLeod reflects on the moral narratives of today’s world. 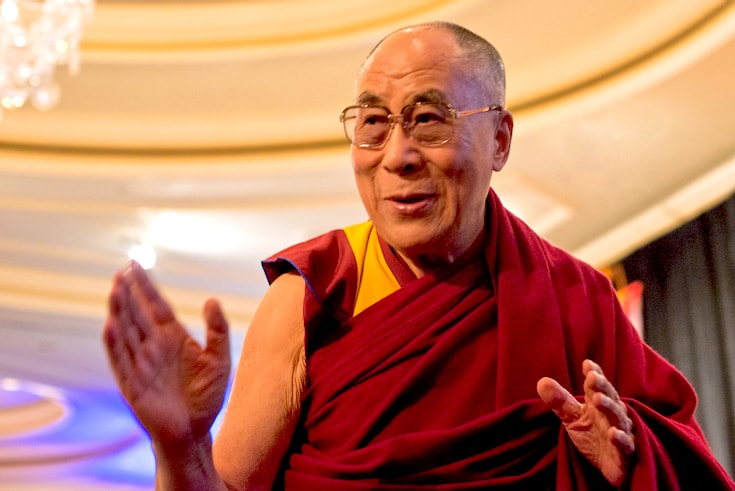 It’s a joy to celebrate His Holiness the Dalai Lama in this issue of Lion’s Roar. It also makes me sad.

Reading about the Dalai Lama—his openness, humbleness, and authenticity—and his message of compassion and human fellowship only highlights how bereft our world is today of true moral leadership, at a time when we need it most.

The great moral and spiritual leaders, like His Holiness the Dalai Lama, bring out the best of who we are as people. They inspire us to trust and express our human goodness, which they also reveal to us through their own being. They are on the side of what Abraham Lincoln called “the better angels of our nature.”

But around the world today there are powerful people doing just the opposite—they are encouraging and manipulating the worst in us. Demagogues and their allies take advantage of people’s fears, ignorance, hatred, and short-sightedness to divide us against each other and increase their own power and profit. They mock the kind of values the Dalai Lama teaches as “soft,” “bleeding heart,” and the new one, “clutching pearls.” (Note how many of these slurs have a gender connotation. In the patriarchy, implying something is a “woman’s value” is a go-to way to delegitimize it.)

Which of these two moral narratives will humanity ultimately choose? The one that trusts and cultivates the best in people, or the one that takes advantage of the worst? This is the question we face, now and for however many decades we still have left to change the world’s direction. In Buddhist terms, we could say that it’s a choice between a social and political system based on the poisons of samsara—selfishness, aggression, greed, and indifference to others’ suffering—and one that reflects our enlightened nature of compassion, wisdom, and interconnection. Those are Buddhism’s better angels.

Perhaps the next great moral and spiritual leader will not be an individual, but a social justice movement, a cultural group, or a whole generation.

This is probably the point where I’m supposed to say that I’m hopeful we’ll make the right choice. But I don’t know which side is going to prevail. And let’s not fool ourselves: it is a battle, a global moral/political battle.

On one hand, demagogues of many stripes around the world are bringing out the worst in people and suppressing the best. Their power is growing right now, and so is the damage they are doing. It’s tragic.

On the other hand, there is a swelling movement of people across the globe with the kind of values the Dalai Lama teaches us—caring, nonviolence, and a sense of responsibility for each other’s well-being and the planet’s future.

Like all groundswell movements, its future shape is unclear. Will it produce its own great moral leaders—new Kings, Gandhis, and Dalai Lamas? Or will it remain a grassroots force, powered by people’s collective values and ethics?

Thich Nhat Hanh has said that the “next buddha” will be the sangha, the Buddhist community. Perhaps the next great moral and spiritual leader will not be an individual, but a social justice movement, a cultural group, or a whole generation. Perhaps it will be you and I and our small acts of love and decency put together.

I can’t think of a better goal in life than to support the better angels of our nature. We can do that every chance we get, politically and in our daily lives. I think that’s the whole point of spiritual practice. Or maybe they’re the same thing: spirituality is nothing more than human goodness, and vice versa. This revolution starts in the heart.