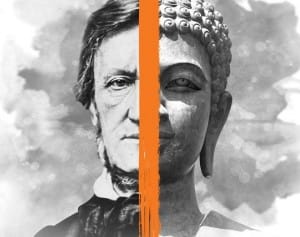 The Welsh National Opera is set to perform Wagner Dream, an opera composed by the late Jonathan Harvey, partly in the ancient Indian language Pali.

Wagner Dream explores Richard Wagner’s interest in Buddhism showing Wagner on his deathbed lamenting his unfinished Buddhist opera, and having a dream in which he’s visited by the Buddha and other Buddhist figures. Harvey, who died last year, wrote the opera in English, but this new production has Wagner and his contemporaries speaking in German, while the Buddhist characters in his dream speak Pali. Though there’s no surviving record of the actual language the Buddha spoke, Pali is thought to be very similar.

Richard Gombrich, president of the Oxford Centre for Buddhist Studies, did the Pali translations. He said there were some challenges, since he had to remove references to things like guns, pubs, and tea — none of which existed in ancient India — from the Buddhist characters’ dialogue. He said he also added a small amount of Buddhist doctrine to the Buddha’s part.

Wagner Dream premieres at the Welsh National Opera in Cardiff on June 12. BBC News and The Wagnerian both have more information.