On Saturday, dozens of Buddhist priests and teachers joined a protest against the detention of migrant children at Fort Sill, Oklahoma. The site, which was used as a concentration camp to incarcerate Japanese Americans, is slated to become a holding facility for migrant children. Kenley Neufeld reports on the demonstration. 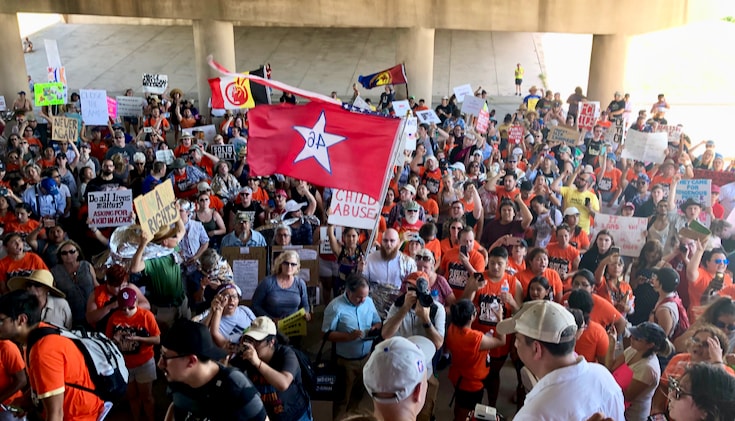 As hundreds of marchers remained silent and took a knee blocking the road at the gates of Fort Sill Oklahoma, 25 Buddhist priests and dharma teachers performed a memorial service and chanted the Heart Sutra on the median. They prayed in memory of Japanese internees at Fort Sill, and in memory of Kanesaburo Oshima, who was shot in the back of the head by a guard in the spring of 1942. They prayed that the 1400 unaccompanied migrant children slated to be transferred to Fort Sill would not experience the same conditions that Oshima faced. Together, we chanted to remember the past and offer our deepest wish that history not repeat itself.

Brought together by Tsuru for Solidarity, priests and dharma teachers from Soto Zen, Jodo Shinshu, Rinzai, Plum Village, Nichiren, and Shingon sanghas traveled to the ceremony from across the country. The rally’s organizers, Direct Action Oklahoma, gave the Buddhist ceremony a central place within the demonstration. The marchers were mostly young people from the Black, Latinx, and Native American communities of Oklahoma. Some undocumented spoke with pride and without fear of oppression. 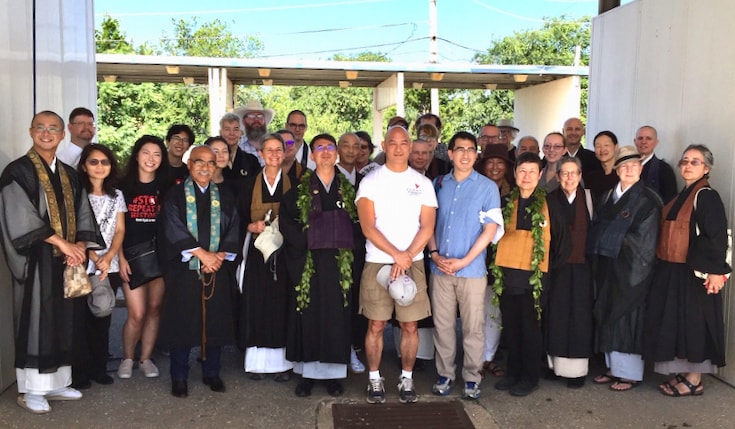 Buddhist leaders at the protest. Photo by Julie Yumi Hatta.

Said Rev. Tenku Ruff, “having Buddhist priests present, in robes… It allowed us to hold the anger, the grief, and the despair in a way that connects and honors the truth of interconnectedness. We were one body of many different groups moving together as a cohesive, mutually supportive whole.”

Fort Sill was established in 1869 to serve as a base for attacking the tribes of Oklahoma, Kansas, and Texas. It is the location where the Apache leader Geronimo died and is buried. “I’m so inspired by the young taking action,” wrote Judy Nakatomi, “all the people showing up, and especially how it was POC centered, really resonated on my heart.  Knowing there is much work to do and we all made a contribution to witness, be present, and continue.”

Japanese Americans, Buddhists, and many more allies folded paper cranes (Japanese: tsuru) as symbols of solidarity and sent them to the rally. In the 102-degree afternoon, thousands of cranes flew in the breeze, symbolizing how the past, present, and future are interconnected and how different communities are interlinked. Each paper crane represents the spirit of concern of its folder. 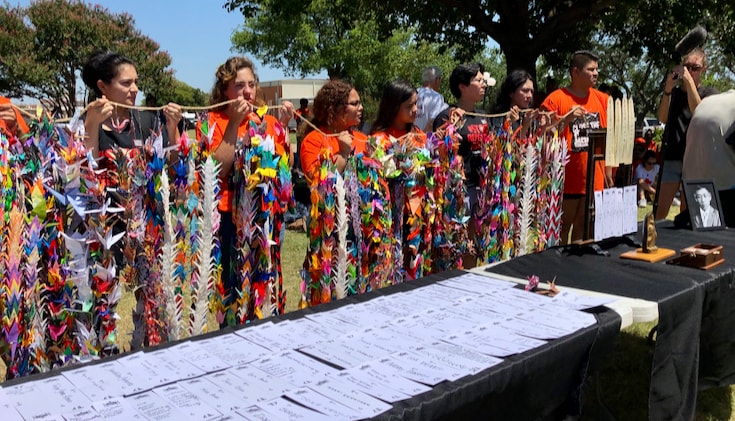 Buddhist communities across the country folded paper cranes and sent them to the protest as part of a memorial service for Native Americans, Japanese Buddhists, and the ten Central American migrant children who died in Border Patrol and ICE Custody in the past year. Photo by Kenley Neufeld.

Following the presentation of the cranes, the priests and dharma teachers gathered around a memorial altar to remember Japanese internees from 1942, the ten children from Central America who have died in the custody of United States authorities in the past 14 months, and six local tribe chiefs who also died at this site in the 1800s and 1900s.

Service organizer Rev. Duncan Ryuken Williams said, “We look to the present moment and the future to also pray for the welfare of the 1,400 unaccompanied migrant children slated to be transferred to Fort Sill as well as for those who will be overseeing their care, including guards, so that there will be the upholding of human dignity and decency and no more deaths of children or other migrants.” 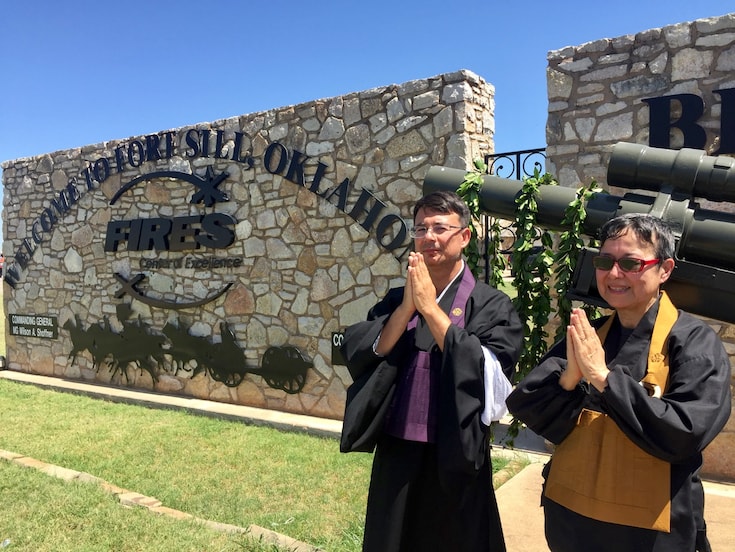 The afternoon ceremony included an opportunity for march participants to offer the names of individuals impacted by detention, immigration, and harassment. As these tablets with names were brought forward to the altar, we chanted Juseige (Three Sacred Vows). By the end, the altar was filled with hundreds of names representing the many stories of immigrants and Native peoples. This memorial altar in this Lawton, Oklahoma park left a beautiful image of solidarity and interbeing.

As we drove back to the airport and our home in California, our sorrow was mixed with gratitude and inspiration. Peaceful direct action can take place within the context of marches and rallies. We have the capacity to bring forth Buddhist practice into the world. As we witness our history repeating itself, our opposition can come from love. All people deserve dignity, decency, and compassion. As Buddhist practitioners and teachers, we have a responsibility to be visible and present in these times of sorrow and suffering.

Kenley is a Dharma Teacher in the Plum Village tradition and is Dean of Educational Programs at Santa Barbara City College.