From Milton Glaser to the very prolific artist known as “Uncredited”—a select visual history from the 1950s-1970s. 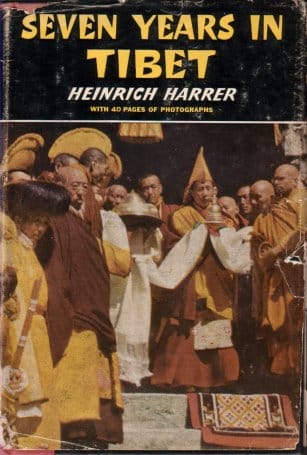 Seven Years in Tibet documents Harrer’s escape from a British internment camp, and the resulting “tortuous journey of twenty-one months to Tibet.”

It became a well-known movie (starring Brad Pitt) and since, its author’s one-time Nazi past has been exposed. He called his involvement a “a stupid mistake,” insisting that he had nothing to do with any illegal activities.

Whatever the case may be, Harrer’s book left its mark. This edition received widespread distribution; it was published by E.P. Dutton and Co. (“Publishers of Everyman’s Library”) and was a Book of the Month Club selection. 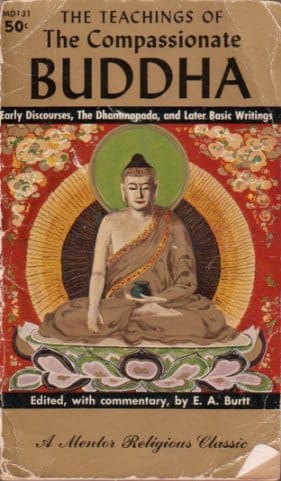 The Teachings of the Compassionate Buddha. 1955. Designer uncredited.

This designer is uncredited, too. That should probably be no surprise; this was mass-marketed in a day and age when credit was hard to come by, especially if you were “just” a staff-artist at a big publishing house. (The back cover reads, “Mentor Books: Good Reading for the Millions.”)

It’s sort of a stylized mishmash; it evokes a Tibetan tangka, but with a more Southeast Asian-style Buddha. And its colors almost seem to anticipate 7-Up’s psychedelic/pop-art “Uncola” campaign, which would come, after Peter Max, in the late 60s.

Don’t know how many of the “Millions” bought it — much less read it. But it’s not hard to find, that’s for sure. (There have been many printings, some with different covers.) 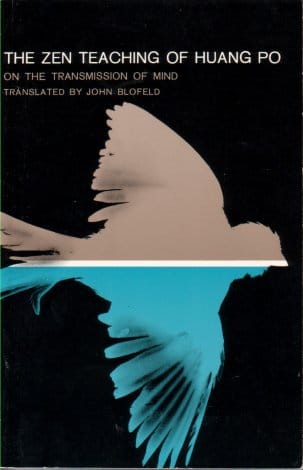 The Zen Teaching of Huang Po. 1959. Design by Roy Kuhlman.

Strikingly modern in the way that Grove Press’s Evergreen Books were known for. The design is abstract, its meaning not easily parsed. Does the split bird represent dualities, resolved? Is the “Mind” of the subtitle somehow like a bird?

It seems unlikely that the casual bookstore-browser of the day would or could have made such leaps. It doesn’t matter; the cover has the appeal of a good movie poster or a classic Blue Note album cover. 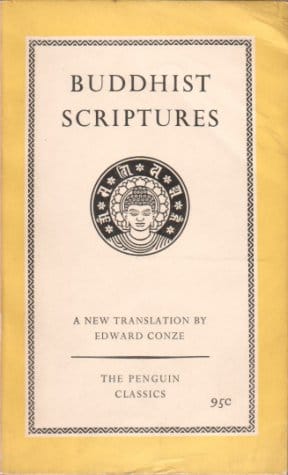 Kind of a shame the designer here is, again, uncredited. Whoever it was did a nice job, and with only two colors. (You might notice how often black and/or yellow are used in other covers here, too.)

Note the strong, modern, iconic feel of the image. About it, the book says:

The device on the cover of this book is based on the head of the great standing Buddha from Mathura, now in the Indian Museum at Calcutta; the inscription in the halo represents the Sanskrit meditation formula Om mani padme hum [the six syllabled mantra of the bodhisattva of compassion, Avalokiteshvara (Sanksrit; Chenrezig in Tibetan)].

Beautiful and simple. And not meaningless. 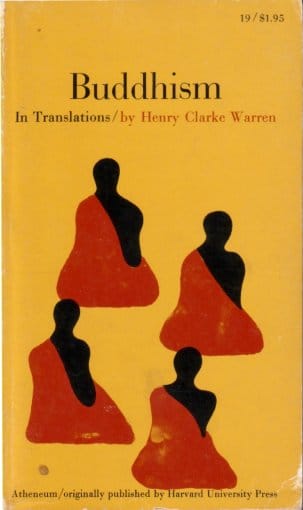 Ah: Milton Glaser. Designer of the “I [Heart] NY” graphic. The Barron’s logo. The famous Bob Dylan silhouette with the multi-colored locks of hair. The interior of the Rubin Museum of Himalayan Art. And a bazillion other things we’ve all seen. 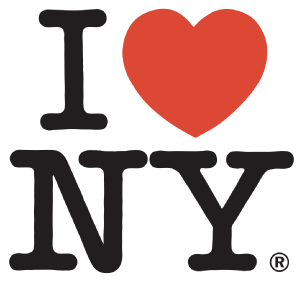 Here, he simply presents four monk-figures sitting in meditation; a miniature, primary-color sangha. It’s so simple, anyone could have done it. But at that time, only Milton Glaser would have. 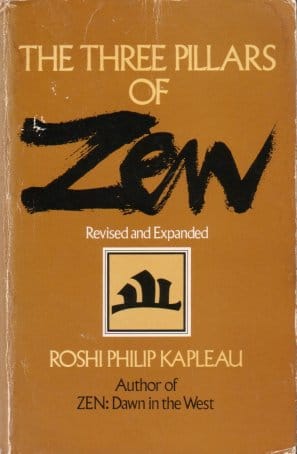 The Three Pillars of Zen. Basic look conceived in 1965. Designed by Richard Wehrman.

Originally published by Beacon Press, it’s the look of the Anchor Books editions (one is pictured here) that most people know.

That big, brush-script “Zen” would be aped countless times. But it’s the little “three-pillared” emblem that is so recognizable. That emblem, called a kao, is, in fact, used here “not for meaning, but abstractly, for [its] decorative quality,” as an interior note explains. (Kao were kinda like graffiti tags; they were used as signatures by Japanese Zen priests of old.)

Kao are employed as decoration throughout the book, but this one has truly functioned in the branding of the book and its author. It serves today as the logo for the late Kapleau Roshi’s famous Rochester Zen Center. 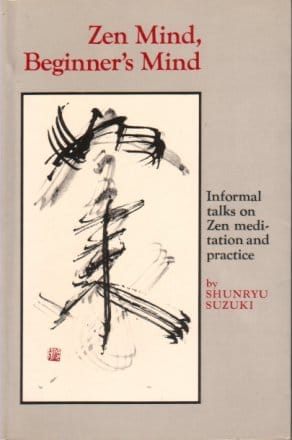 This book has sold a zillion copies in a zillion printings, and they all pretty much look like this. (A 27th-printing copy is shown here.)

Technically, this cover should be dour. It’s gray and black and red and white. But look at the way those colors work together. The calligraphy is practically alive, and moving!

And the type couldn’t be simpler. It’s so definitive and confident (despite having no real character of its own) that they actually broke the word “meditation” in the subtitle, and figured they could leave it that way.

Clearly Naoto Kondo really understood the book. Calm and lively all at once, this cover’s a perfect match for the writing inside. 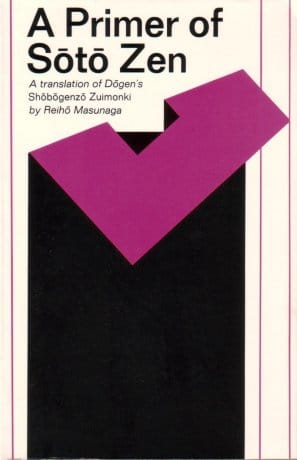 Another uncredited design. (What’s up with that?) This one captures the stark geometry and big san-serif type trends of early-70s print media.

It’s another abstract approach: the black field is peeling away, presumably to reveal all of the contents. (Just as Reiho Masunaga’s translation of Master Dogen’s teachings renders them immediate and accessible.)

Still, it’s a weird choice: if the black field were laying flat, we’d only be seeing a bit of the subtitle, and the translator’s credit. Not particularly intriguing. 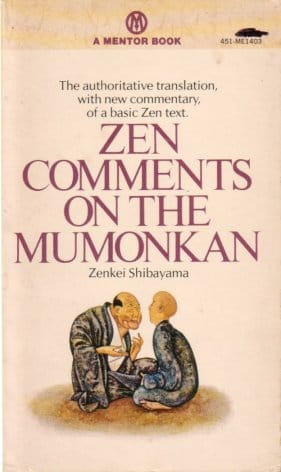 Another uncredited Mentor cover, this one for Zenkei Shibayama’s excellent translation of Master Mumon’s book of koans, The Gateless Gate.

It may be hard to believe that interest in Zen, in 1974, was widespread enough for a mass-market koan book. But keep in mind that the 60s were still resonating. Between cashing in and having an actual, significant (and growing) readership to serve, it made sense for big book companies to keep dabbling in Dharma publishing.

Mentor did a nice job with this one. The text is more authoritative than inelegant, and the illustration is lovely. We see a Zen master (Mumon? Shibayama?) and his student in formal interview, practically knee-to-knee.

Warmth is apparent in the Zen master’s smile and body  language. His student is engaged. Paying true attention. It makes practicing the Dharma look like serious business, but not humorlessly so.

As it should be. 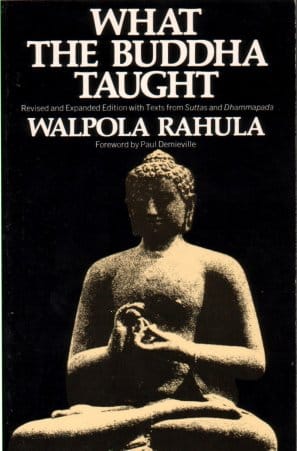 What the Buddha Taught. 1974. Designed by Kenneth R. Deardoff.

Grove’s tact for this cover looks to have been notably different from, say, their choice for The Zen Teachings of Huang Po. Of course, both covers are just black, white, and one color. But this one has an aura of subdued, staid authority which is missing from many of the more pop-art influenced treatments you’ll see.

It seems to have worked. While What the Buddha Taught‘s cover got revamped recently, this version is practically omnipresent on readers’ bookshelves, not to mention at used book stores and yard sales. 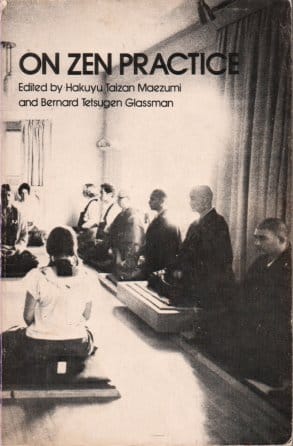 Taizan Maezumi and Bernie Glassman, the two editors of On Zen Practice (and its subsequent volumes) would prove instrumental in the West’s embrace of Zen and Buddhism. These guys really presented the dharma and its practice in modern, everyday terms.

Perhaps no one could have known what their legacy would be. But this cover hinted at it.

Produced by the staff of the then-fledgling, yet already- prominent Zen Center of Los Angeles, the front and back covers depict, well, Zen practice. What’s notable (other than the New Directions / Grove-reminiscient style) is who’s doing the practicing. We see Maezumi and Glassman, sure. But we also see laypeople: women and men, shaved heads and long hair, robes and tee-shirts.

These are regular people! Not statues or etchings of someone who lived centuries ago.

This book, and its cover, may just signify one of Buddhism’s first truly American moments.