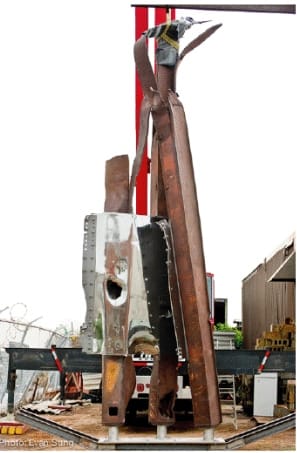 Artist Miya Ando, who was profiled in “Dharma & Steel,” a SunSpace exclusive by Andrea Miller, has completed a September 11th memorial sculpture for display in London. The piece, whose location had not been previously announced, debuted today in London’s Battersea Park. It seems fair to describe the work as monumental: made from World Trade Center steel, it’s three stories tall and weighs 9000 pounds.

Commissioned by the 9/11 London Foundation, the piece was, Ando says, “created with a Buddhist spirit of creating a contemplative, transcendent object in the name of peace; the mirror becomes a field of nothingness, filled with light and opportunity for self-reflection. I hoped to create a sculpture that pointed light to the heavens to pay homage to those lost in the tragedy.”

“My concept,” Miya says, “was to sand and polish part of the steel to become a mirror finish. The mirrored part is a metaphor for transformation (of material, and of effects from the 9/11 tragedy). Since the surface reflects light and its surroundings, it becomes almost transparent.”

Ando also recently created “Kagami,” a work made from a piece of stainless steel and a piece of aluminum, polished into mirrors, and an aluminum piece chrome- plated into a mirror: 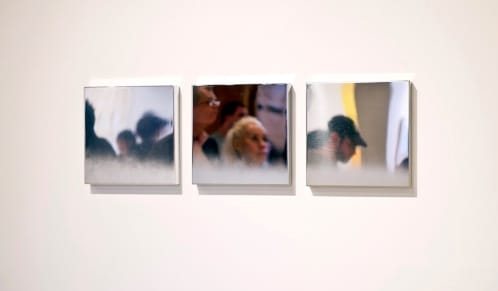 She created the piece while working on “Peace [After 9/11]” and says of the technique that the two pieces share:

There is a notion of “Migaku,” or polishing in Japanese — the idea that one can polish and refine one’s spirit. This notion was often discussed in the Buddhist temple I was raised in. My idea for the 9/11 sculpture was to migaku or polish the rusted WTC steel until it became a refined mirror finish, reflecting light and the viewer and becoming almost transparent as the material disappears and becomes a surface which simply reflects it’s surroundings and light. “Kagami” serves as a visual metaphor and continues my study of nothingness, as the materiality of metal transforms into a void or image of emptiness that is full of opportunity.

“Kagami” is viewable at and available through Sundaram Tagore Gallery in New York City.