With just seventeen syllables, the essence of haiku is what  isn’t said. Mary Rose O’Reilley on reciting Basho to the Northern forest. 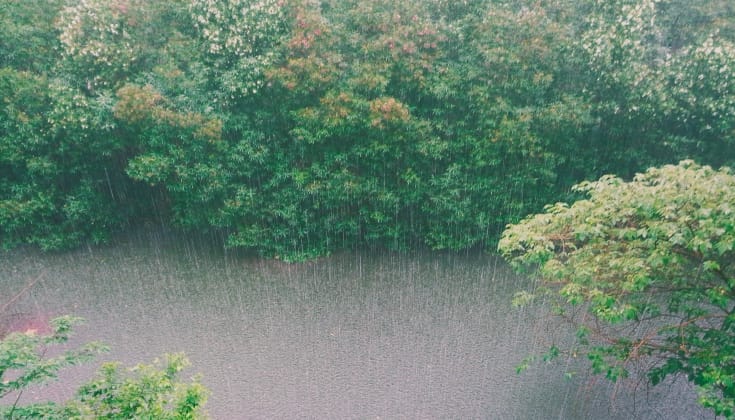 Last winter I lived on an island in Puget Sound. My bedroom window faced one of those green, fecund forests of the Pacific Northwest from which it seems anything can emerge: a mule deer, a dinosaur, an angel, an idea about what one’s next step in life might be. I hoped for the latter.

Before I left for this retreat, my friends and I strategized about staying in touch. We have so many ways to do this nowadays—clutching our wee-pods and me-pods, over-stimulated and overloaded—that it’s easy to lose someone forever. My friend Katherine didn’t want to telephone or write letters, as she was struggling with a deep grief that resisted sentences.

“Let’s just send haiku postcards to each other now and then,” she said. So we did. Carried away with enthusiasm, I decided to write a haiku every morning, to mark the path of my life on the island.

Nothing in my apprenticeship to poetry had taught me how to work in this disciplined Japanese form, which is good, because I would have learned how to obsess over syllable counting or some pseudo-Zen effect. There was, however, one poem by Basho, the seventeenth-century master of the form, which I knew by heart in Japanese, because I’d memorized it long ago to greet a guest from Kyoto:

My Japanese guest had responded to my effort with stunned incomprehension before he doubled over laughing.

Then he taught me to say the word “mizu” with something like an arrested breath on the second syllable. This small shift, for him, made all the difference. Perhaps all he did was correct my pronunciation, but years later I could hear a faint splash as I recited Basho to the Northern forest.

Overall, Puget Sound was wet, cold, and green. Winter faded into spring, and I kept writing:

I am full of light!
full moon cries at the window.
How can you choose sleep?

Each dawn came with a different, modest explosion. Each minute probably does, too, but for how long can one sustain attention?Haiku’s subject is, in small letters, enlightenment—everyday mindfulness, a grateful record of daily grace. It’s a subtle practice. Basho’s poem is perhaps the most famous haiku ever written, but its English translation leaves us on the shore of a big huh? “Old pond/frog leaping/splash.” But memorize it, live with it, and Basho’s moment works its way into your spirit.

Why should this be important? Benedictine monk David Steindl-Rast has written about haiku as an example of what he calls “sacred sensuousness.” He says, “The haiku is a scaffold of words; what is being constructed is a poem of silence; and when it is ready, the poet gives a little kick, as it were, to the scaffold. It tumbles, and silence alone stands.”

For Steindl-Rast, haiku frames a peak experience and preserves it for the community. I can accept this idea if I think of peak experience in humble terms and the poem as a kind of bubble on the air, no big deal. Writing a daily haiku, then, can become a discipline as simple and sensuous as gardening. The poem’s eye is on the small things of life. “All things are passing,” Saint Teresa of Avila wrote. “God only is steady.”

Spider web pulses
attuned to the tossing spruce:
inside to outside.

My friend Jim Thomas apprenticed as a young man to a Japanese psychiatrist who ran an odd clinic. His guests lived in cabins on a big estate. Their daily task was to write in their journals and leave them outside for the psychiatrist to collect. When they stopped writing about their own troubles and started writing about the natural world, the doctor began to speak to them. Soon after, they went home, cured. I guess.

This story has always been a koan to me: what a treatment protocol! But, from my own experience, I know that when I become less fascinated with my mind and more immersed in creation, I feel light and whole.

Henry David Thoreau’s late journals returned over and over to simple, natural processes. He had no more to say about the town of Concord, no further critique of the whining basket sellers or the ladies’ trivial preoccupation with household crafts. He was perhaps healed—though maybe less interesting. I need to go to a still, no-drama place in my mind to read these journals, a place that is rarely available to me, given my own preoccupations with basket selling. My head is full of chatter. I have to go to the woods every couple of months to let it all quiet down. Then I become boring. What freedom!

My four months on the island offered no great opening. I looked at the same trees every day. Perhaps the same sparrows. Once a pileated woodpecker. Then April came. Who can take in more?

How might haiku fit into your spiritual practice? What would serve as your “scaffold of silence”? It doesn’t have to be a poem. It might be a photograph, a spontaneous drawing or calligraphy, a musical improvisation.

There were a few guidelines I followed in my own experiment. I chose to imitate the traditional Japanese syllabic form: three lines of, respectively, five syllables, seven syllables, and five syllables. I tried to stay present to the outer world, rather than to my inner condition, though I did steadily fail at this. I wrote a haiku—or a little chain of them—every day and, if they were lame, well, in the words of the poet William Stafford, I lowered my standards.

Everyone’s gone.
Moon’s where they left it hanging:
uncritical eye.

Skylight full of moon.
To intrude and see nothing,
feel nothing, then leave!

A resounding No!
is what you get from forests.
Their Yesses take time.

Something turns over,
cold rain changes to warm rain,
scent of south wind.

Small souls opening,
gold stamens through green moss sponge:
what they can offer.

Mary Rose O'Reilley is a potter and folk musician. A Quaker-Buddhist who took the precepts in Plum Village, she follows the common threads in Buddhism, Christianity, and deep ecology. Her books include The Love of Impermanent Things and Half Wild, a volume of poetry which won the 2005 Walt Whitman Award of the Academy of American Poets.