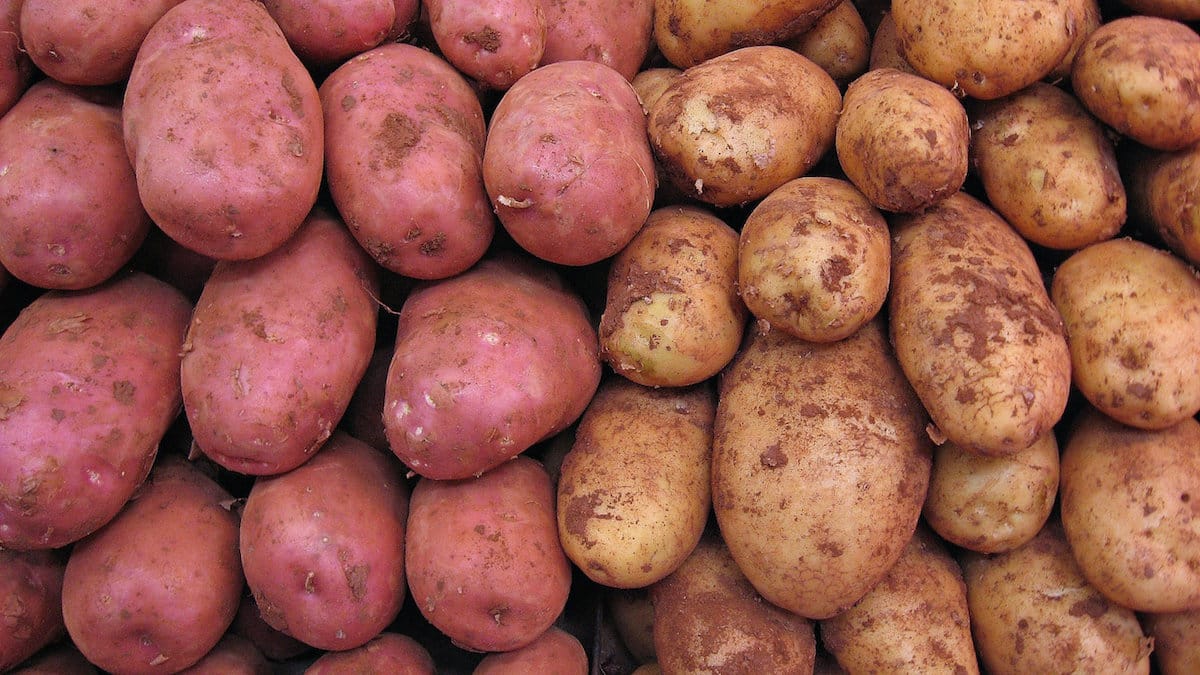 When I was the head cook at the Tassajara Zen Mountain Center in the late sixties, we ate a lot of brown rice. This was supposed to be good for you, at least according to the “Zen” Macrobiotics, who believed that rice was the perfect food. Although I was not personally an adherent of the macrobiotic diet, as cook I ended up catering to those who were, because they were so loud and impassioned. It took us years to wean ourselves. Twice during that time I tried cooking potatoes, and both times were fiascoes. What did I know about cooking potatoes?

For the last dinner of a sesshin, our week of intensive meditation, I thought I would cook something special, namely potatoes. Potatoes might not sound particularly special, but we had been eating brown rice for three months. I could imagine just how delicious those baked potatoes would be, especially with some butter and sour cream. Nothing to it, right? You just put them into the oven and bake. Simple.

We filled the ovens with potatoes. I think we’d washed them and rubbed butter on them. I was delighted. The potatoes were baking, and I thought that one and a half or two hours was plenty of time, but I found out it wasn’t. Twenty minutes or so before meal time we realized the potatoes were not getting baked. My spirits dropped. We turned the ovens up full blast, but it was too little too late.

Under everyday circumstances one simply apologizes and delays the meal. In the restaurant business one might offer complimentary wine, but in the Zen tradition, when the bell rings, the food is served. Period. Meals are never late. No excuses, no delays. Certainly for the meditators it is quite reassuring. When the time comes for dinner, dinner comes. The cooks, especially the head cook, take on all the pressure and anxiety of making sure the food is ready. I have since discovered that in certain other spiritual traditions when the food is ready, the bell is rung. This way the anxiety is shared. “So the food’s not ready. That’s not a problem for you, is it?” But this was Zen!

I had wanted so badly to delight everyone, everyone who had been diligently practicing meditation, to reassure everyone, to treat everyone to what in the eyes of our macrobiotic contingent was something of a forbidden fruit. “Nightshade family,” they would say, as if that explained it. Also I had heard that our teacher, Suzuki-roshi, loved potatoes. Unfortunately the great feast turned into the great fiasco.

The potatoes never got baked. I had neglected to take into account how much an oven cools off when a large quantity of food is added. It can take an hour just to get the food up to oven temperature, let alone cook it. Also I have since learned that ovens heated with bottled gas don’t get as hot as those with commercial gas or electric. I kept thinking that maybe the potatoes wouldn’t be that bad, but they were.

After we finished cooking, at the last minute we would put on clean aprons and go to the meditation hall to serve the meal. Sweaty, hassled, frazzled, fried from cooking, we would try to calm down, to settle and collect ourselves in the few moments before we would be entering the meditation space.

During serve-up the anticipation built. Glorious baked potatoes! Eager eyes and noses prompted eager bowls to receive generous helpings of potatoes. With serve-up complete, dining commenced. For our meals in the meditation hall, we use a set of eating bowls which come with a spoon and chopsticks, and from the back of the meditation hall I watched with fascination and dread as Suzuki-roshi’s spoon bounced off his potato. The man was intrepid though, and he had done plenty of stone work in his time, so he proceeded to make a row of holes with his chopstick, and then chisel off a piece of potato. He did the best he could.

A comic scene ensued. I was devastated, yet I had to carry on. I don’t recall what happened to all those hunks of potato—if they were eaten, collected, or disposed of with the wash water. We had pots to wash and the kitchen to clean before I could fall apart. But 1 didn’t fall apart all that much, because I knew that I had made my best effort.

Sometime later I apologized to my teacher, Suzuki-roshi. He always made me feel good about myself. Potatoes might mock my effort, but Suzuki-roshi knew my heart.

The next sesshin, I decided to try again. This time I planned to serve mashed potatoes, and get them cooked well ahead of time. Only when we were putting the potatoes into the wooden rice buckets did I begin to sense a different kind of disaster was in store. The buckets just weren’t very full. Once again I had made a miscalculation. We didn’t have nearly enough. Potatoes, it turns out, are like eggs. When they are mashed they don’t look like much. People who would eat only one or two eggs fried, poached, or hard-boiled, will happily indulge in a three-egg omelette, and if the eggs are scrambled they might even eat more. A big potato doesn’t look like much when it’s mashed.

The meditation hall was buzzing. Those being served first insisted on having their bowls heaping full of potatoes. Those at the ends of the rows got little spoonfuls. The hall swarmed with emotion: bitterness, greed, joy, passion, resentment—potatoes wreak havoc. I think we heated up some leftover brown rice for seconds. The damage had been done. When it comes to food, people forget their fellow creatures easily. They want a full bowl, by golly, regardless of how little that leaves for others a few steps away. Another low point to add to the highlights of my cooking career.

I am not going to tell you how to make baked potatoes or mashed potatoes. You’ve got a few clues above, and perhaps that will do. What I would like to offer you are my three most favored potato recipes, starting with one which I recently referred to as my most favorite.

Wash the potatoes and cut them into chunks—it will usually do to cut the potato in half, and each half into quarters. Peel the garlic and cut the largest cloves in half. Place potatoes and garlic cloves into casserole dish or baking pan. Pour in the wine so it comes about half way up the potatoes. Sprinkle with salt and pepper. Cover. Bake.

Bake for a good hour and a half. If it ends up being two hours, that’s probably fine too. If you are around and think of it, you can stir the pot now and again, enjoy the developing bouquet, and return it to the oven.

After the minimum 1 1/2 hour baking, stir the potatoes and add the cream. If you are trying to be modest about butter fat, you could try adding a little less, but this isn’t much per person. Uncover, and continue baking another 20-30 minutes, while you make a salad and put together a vegetable dish.

That’s about it. Oh, you might check the seasoning and add a grinding of black pepper on top. Most importantly though, allow your awareness to savor the potatoes and be soothed and delighted.

“Kitchen parchment” is an unwaxed paper, similar to the paper used as pan liner for baking products. If you cannot find the parchment at your market, you can sometimes get the pan liner from a local bakery or doughnut shop. Also you can make the same dish without the parchment. The flavors are quite similar; the presentation varies.

Wash and chunk the potatoes. Separate the cloves of garlic but leave the skins on. (The skins keep the garlic from toasting when it is in contact with the hot pan.) The largest cloves of garlic need to be cut in half lengthwise, so that they will bake in the same period of time as the smaller ones.

To wrap in parchment, start with a piece of parchment about ten inches wide and fifteen inches long. With the short side facing you, place a quarter of the potatoes on the upper third of the paper. Add five cloves of garlic, a sprig of rosemary, a dribble of olive oil, and a sprinkling of salt and pepper.

Fold the paper in half over the potatoes, and then fold over the open edges to seal all the way around. Theoretically you will end up with a half-moon shape, but people do this in all sorts of ways and shapes.

Place on a baking sheet (try not to overlap them much) and bake for 40-45 minutes until the oven is aromatic. That’s it.

To make this dish without the parchment paper, simply place the ingredients in an oiled casserole or baking dish and cover with lid or aluminum foil. Bake. May take a few minutes longer, but should be close to 45 minutes.

Wash potatoes and cut into bite-size chunks, halves, quarters, eighths, or more depending on size of potatoes. Cook potatoes in boiling, salted water 6 to 8 minutes until tender.

Cut stems off arugula and if leaves are large, cut in half. (Do the whole bunch while together, then wash and spin dry what’s needed.)

Fold arugula into potato salad. Depending on how hot potatoes still are, arugula will cook slightly, soften and sweeten. Let stand 20 to 30 minutes before serving, if desired. Adjust salt, pepper and vinegar to taste before serving.