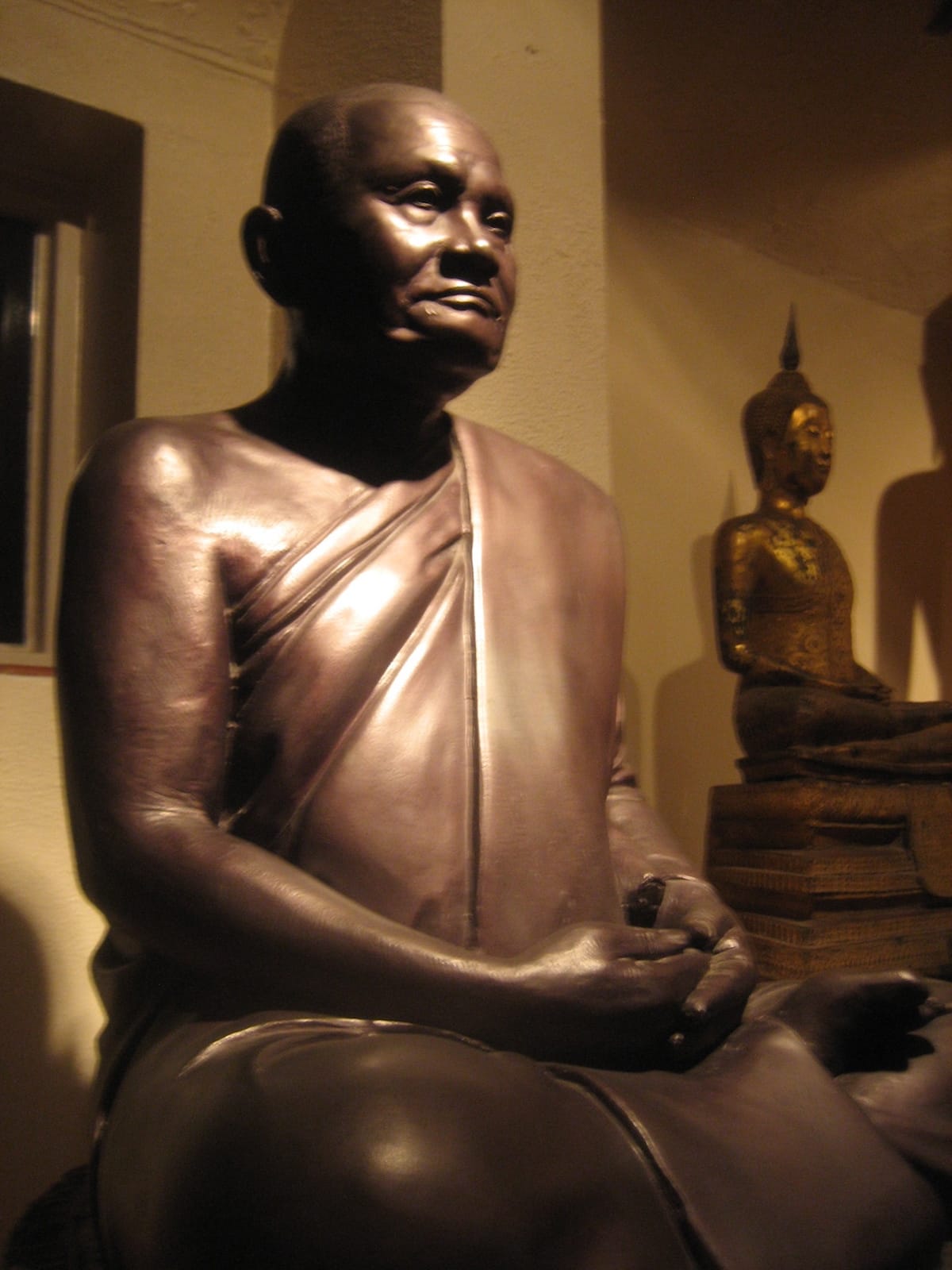 A humble man of small stature, living simply in a kuti (meditation hut) in the remote and impoverished northeast of Thailand, grew to be one of the most influential figures in Buddhism in the West. Ajahn Chah was not only an important teacher for the founders of the Insight Meditation Society, a largely secularized group devoted to vipassana meditation, he also left a legacy of rigorous Theravada monasticism that is carried on in monasteries and their associated lay communities throughout the world. This group of monasteries is led by Ajahn Chah’s senior Western monks. There is no overarching organization that carries on his legacy, but the age of the Internet demands a label, so when the far-flung community decided to create a web portal in 2001, they gave it the name forestsangha.org.

Three of the best known Forest Sangha teachers are Ajahn Sumedho in England; Ajahn Amaro in the United States; and Ajahn Brahm in Australia. They and other senior Western disciples serve a monastic community of about 150 spread amongst five monasteries in England, three in Australia, two in New Zealand, and one each in the United States, Switzerland, France, and Italy, along with several smaller “associated monasteries,” two of which are in Canada. A project is under way to create a substantial monastery outside of Ottawa in the next several years.

The modern Thai Forest Tradition was born in the late nineteenth century as a revival movement intended to return to the strict observance of the Vinaya. At the time, rules were very loosely observed and little emphasis was placed on meditation. Ajahn Chah, born in 1918, met and was inspired by Ajahn Mun, one of the leaders of the revival. After years of assiduous practice and study, in 1954 he established Wat Pah Pong, the monastery that remains the seat of Ajahn Chah’s lineage in Thailand, with over 200 branch monasteries throughout the country. In 1967, Ajahn Sumedho, who had completed a rains retreat (vassa) in a monastery in Nong Khai, near Laos, decided to travel to Wat Pah Pong to study with Ajahn Chah. The teacher accepted him but insisted that no allowances be made for the Westerner.

Life was difficult at Wat Pah Pong. Another monk who was there in those early days says, “It was rigorous, all right. You got up at 3 a.m., after which there were long hours of chanting and long hours of sitting, followed by a long walk to receive alms, which would amount to one very simple meal in the early morning that would do for the whole day. There was lots of hard work carrying water and sweeping leaves and long periods of solitude.” But there was also Ajahn Chah: “You could go and sit in his kuti and he just exuded a wonderful feeling of profundity, naturalness, and ease. There was no feeling of guru worship at all, though. One minute he would be dealing with representatives from the palace and then he would turn to a villager and chat about his water buffalo and then turn to speak to a young monk. The whole place was influenced by his manner. It combined rigor and joy in a very beautiful and livable way.”

The number of “internationals” coming to Wat Pah Pong grew, and in 1975 Ajahn Sumedho and a few Western bhikkhus spent some time in a nearby forest. The villagers asked them to stay, and the first Thai monastery for internationals, Wat Pah Nanachat, was set up. It is now home to about thirty monastics and is a mecca for Western students of Ajahn Chah’s tradition. Two years later, Ajahn Chah traveled with Ajahn Sumedho to England at the behest of a group of students who hoped to establish a monastic sangha there, and not long after, Chithurst Buddhist Monastery (now known as Cittaviveka) was established, followed later by the larger Amaravati, in Hertfordshire. In 1983, Bodhinaya monastery in Western Australia was started by Ajahn Jagaro. At about the same time, Ajahn Sumedho began making trips to California to teach, with an eye to establishing a monastery there. This process finally bore fruit in 1995, when Master Hsuan Hua, of the City of Ten Thousand Buddhas, donated 120 acres of forest in Redwood Valley for the establishment of Abhayagiri Monastery, near Ukiah.

The forest monastery model is based on having kutis set throughout the forest surrounding a central building where the monastics come for chanting, eating, and other group rituals. Not all the monasteries are large enough to accommodate this setup, but all follow a schedule similar to that of Wat Pah Pong. They do not allow monastics to grow, cook, or store food, and they govern themselves entirely according to the Vinaya. While senior teachers and abbots are accorded respect, major decisions are made by consensus. The sangha holds regional meetings each year and a worldwide meeting about every four years, where representatives reach consensus on whatever matters are at hand.

In addition to training monks and nuns, the monasteries are a source of learning and inspiration and a place of practice for laity. According to Ajahn Munindo, abbot of Aruna Ratanagiri in Northumberland, “The restrictions placed on the renunciate sangha intentionally create a dependency on the lay community and an obligation to give them something by way of example. If the monastic sangha doesn’t behave itself, it won’t be supported.” All of the monasteries are supported by a network of laypeople, who visit the monastery and also often belong to urban meditation groups that are regularly visited by teachers. All teachings — including a vast supply of material available on the web — are free of charge. Over 5,000 audio talks are downloaded each month.

Dorothea Bowen, a lay practitioner for 25 years, came to the forest tradition about 15 years ago because “the devotional practice, chanting, bowing, offering incense, and so on, brought a depth I felt had been lacking for me. It encouraged me to open my heart.” Bowen, who has been to Thailand several times, finds a complete continuity between the tradition in the homeland and in the West. “Generosity is pulled out of you in this tradition,” she says. “I don’t go to the monastery to get something. I go there to give something.”