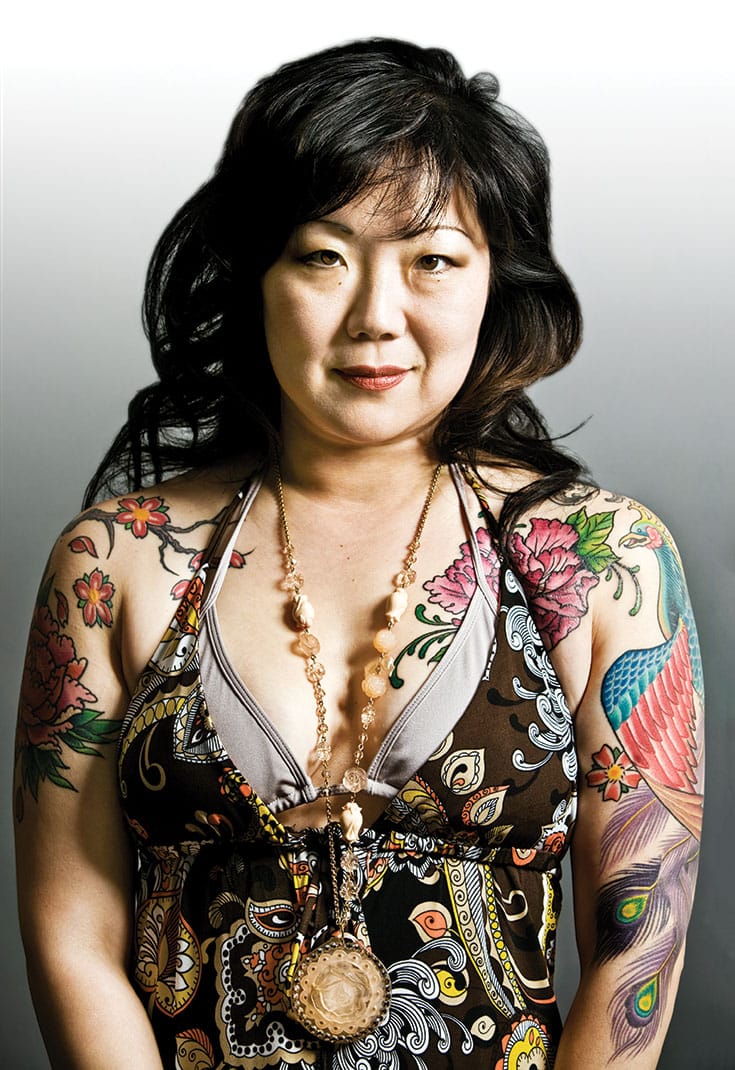 Margaret Cho is Teri in Lifetime’s hit show Drop Dead Diva; she’s a vaudevillian burlesque dancer who sambaed and waltzed for Dancing with the Stars; she’s a longtime anti-racist, anti-bullying, and gay rights activist. And then there’s her main gig: side-splitting and boundary-pushing stand-up comedy. Her latest show, Mother, takes an untraditional look at motherhood and explores Cho’s sexuality. She says being bisexual is an odd experience: there’s really no representation of it in the media, so she has to make it up as she goes along. “Nothing is sacred,” Cho has quipped about her show, “least of all this Mother.”

Despite the raunchy streak, Cho’s comedy is at heart about compassion. I became interested in interviewing her when I came across her blog post on tonglen, a Buddhist meditation practice that involves breathing in the suffering of others and breathing out compassion and peace. As she describes it, “You’re like an air conditioning filter for the pain and suffering on Earth.”

What was it like growing up as a first-generation Korean American? What’s really beautiful, what’s really funny, and what does it take to be a good actor? These are some of the questions Cho tackled in our interview.

Like most women—maybe most people—you’ve struggled with your body image. Have you reached some peace with that?

I have not reached any peace with that, although now I’m beyond caring, which is maybe peace. I am so sick of thinking about it. There are so many other things that I would rather do than worry about my size. You get bored after forty-whatever years of fretting. You get, like, I’ve got to stop worrying about this because there’s no solution.

How would you define true beauty?

I think it’s peace or tranquility, and also compassion and kindness. It’s being real or authentic. Laughing is an expression of beauty because it can’t be faked. Something is funny when it’s deeply truthful. The funniest thing is a deep truth that is undeniable.

Have you always been funny?

I don’t know, but when I saw that people did comedy and that it was a job, I realized that it would be my job. I just knew that that was what I was supposed to do.

How did you get into it?

I started doing comedy when I was about fourteen. I had a teacher who encouraged me, who saw something in me, and she signed me up for sets at comedy clubs. And then I just kept going. I was in a rush to be an adult. I did not enjoy that period of being an awkward teenager. I did not enjoy school. I did not enjoy my peers. I wanted to be around people who I felt were creative. I kind of escaped my childhood by becoming a comedian.

You seem to be really fearless in your comedy, not afraid of crossing a line or upsetting someone. Where does that bravery come from?

Well, I don’t think privacy is that important. As human beings, we’re capable of experiencing all kinds of suffering. It’s more valuable to share that than maintain this guise of privacy where we have to keep secrets from each other. It really doesn’t matter anyway. Everybody has a body. Everybody has emotions. That experience is more helpful to share than it is to hide. Privacy is something that people want to use to protect themselves, when it’s not an actual protective mechanism. We’ve all felt the same, so we’re never really revealing anything.

You have channeled a lot of very painful experiences into your art. Do you think that there’s truth in the idea of the tortured artist? Does someone have to suffer to be able to create something great?

Everybody suffers, regardless of who we are. If you can utilize your suffering in your art, that’s a great way to express it, but I don’t think anybody is exempt from suffering. It’s the human experience. There is always suffering, but there’s always joy too. So I don’t think that there’s any need for an artist to be tortured because that’s just an identity that you adopt. There really isn’t anything that anyone can do to avoid suffering. It is part of being alive. It’s a value judgment even to call something suffering.

A lot of people who might not consider themselves traditional comedy fans attend your shows. Why do you think that is?

I think that people who come see me are generally people who feel unsafe in comedy clubs. Comedy can be very sexist. It can be very racist or rely on racial stereotypes. It can be very homophobic. It can be very hurtful, used to put people down or hurt people’s feelings, and I’ve never really bought into that. I think that’s what people like about what I do. It’s not about resorting to things like racism, sexism, or homophobia, or hurting people in order to get some kind of idea across.

Your dad writes joke books in Korean, but you don’t find his jokes funny. Why not?

I think he’s a bit wordy. His jokes are in story form and they’re just long.

And why doesn’t he think yours are funny?

Can you speak Korean?

No, I can’t. My father was deported from the United States when I was four, and when he returned he was determined that my brother and I not have any kind of Korean accent whatsoever, so that we would not be perceived as foreigners. He would speak to us in Korean, but we would have to answer in English. It was so traumatizing that although I can understand the language very well, I cannot speak it at all. My father now has his citizenship and it’s impossible for him to be deported, and I was born here, so I’m not going to get deported. But I feel like if I start speaking Korean someone is going to get deported.

You often mimic your parents’ accents in your stand-up. Do they mind that?

No, they like it. They think it’s really funny.

How do you keep your routine fresh when you’re doing a lot of shows?

Shows are really a dialogue between you and the audience. In live performance, there’s such a level of unpredictability that you have to be so on top of it and really engaged. My shows tend to change a lot every day.

That means the shows are fresh because they really are fresh?

You act as well now. What do you think is the key to being a good actor?

I think it’s really about being able to be compassionate and slip into somebody else’s skin. To be able to understand what it is to look at their life from the inside.