Claire Heisler sits down with Muslim punk author Michael Muhammad Knight to talk his book The Taqwacores, Buddhism, drugs, and the future of Islam in America. 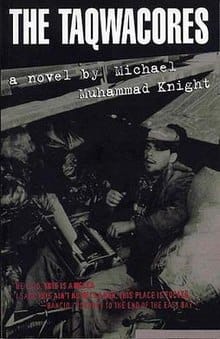 Michael Muhammad Knight was raised Roman Catholic but developed an interest in Islam and, at the age of seventeen, went to Islamabad, Pakistan, to study at Faisal Mosque. After becoming disillusioned with orthodox Islam, he wrote the zine books Where Mullahs Fear to Tread and The Furious Cock. In 2002, about to leave Islam forever, he wrote The Taqwacores. The support he received from young Muslims following this publication inspired him to give the faith another chance. The novel also gave birth to the Taqwacore music scene, which combines punk attitudes with Islam. Since then, he has written, Blue-Eyed Devil (a Kerouac-esque road odyssey), The Five Percenters, the memoir Impossible Man, and the upcoming Osama Van Halen. He currently resides in New York.

What inspired you to become a Muslim in your teenage years?

Islam gave me a purpose and a very structured way in which I could take charge of my own life. I first encountered Islam through Malcolm X, and that story of discipline and transformation was exactly what I needed.

Do you see any similarities between Buddhism and Islam? Are there areas where Buddhists and Muslims can work together for the common good?

Don’t get caught up in the illusions of this life; everything perishes; you will not receive lasting peace and happiness from a $500 pair of sneakers. A Buddhist and Muslim could at least agree on that much. There have been exchanges between Buddhism and Islam in the past. When the early Sufi saint Ibrahim bin Adham was out hunting fox, he heard a voice declaring that Allah had created him to have compassion for all living things. It’s basically a Buddhist thought getting translated into Islam. I can read Buddhist materials and process them in Islamic ways. I might be a MuBu at heart. I’m just waiting for that door to open.

Recall your most vivid spiritual experience in your life so far.

My most meaningful spiritual experiences are the ones that point out to me just how lucky I am. During the pilgrimage to Mecca, there’s a ritual that commemorates Ishmael’s mother, Hajar. When performing the ritual, which is called sa’ee, I just thought of my own mother and how she saved my life on a number of levels, over and over again. She took care of me and protected me when I was completely helpless in the world, and surrounded me with love and patience when I deserved none. She has become my real ayat, my sign of God, my proof of God. Crying over my mom while in Mecca, I was probably the closest to being a real Muslim that I’ve ever been in my life.

When the character Yusef Ali in The Taqwacores compares punk and Islam, he says, “both have suffered from sell-outs and hypocrites, but also from true believers whose devotion had crippled their creative drive.” How can people both believe and evolve in their faith?

Once you recognize how much of your tradition is a product of historical forces, it empowers you to be an historical force yourself. You can believe in Muhammad’s experience in the cave, or Buddha’s experience under the tree, but whatever comes next is just you and me deciding what it means. We need to believe in our own authority. Neither Muhammad nor Buddha got the truth spoon-fed to them. They had to go deep into themselves and find it.

Were any of the characters or events based on real people or situations?

A reviewer actually noted similarities between Yusef’s sexual awakening in the novel and that same element in my nonfiction memoir, Impossible Man. So apparently. And one of my friends said that every character in the novel was me in some way.

Do you see punk as a uniting force where religious exiles from all faiths can come together in common rebellion?

I don’t know, because some punks are fundamentalists about their scene. I’ve heard people argue that if you’re truly a punk, you have to oppose religion in all its forms—which doesn’t really seem like a “punk” thing to say. Scenes aren’t cool, people are cool.

Fasiq, in The Taqwacores, combines hallucinogens with his Qur’an reading. What would you say to people who believe drugs aid in their understanding of spiritual matters?

In Pakistan last year, I had what I’d consider a legit spiritual experience after doing bhang lassi, which is a drink made with crushed cannabis, and then going to the shrine of the Sufi saint Hujwiri. But I don’t imagine that the drug path really goes anywhere. If the sky changes color and you see God, great, but that’s not giving you ethics or helping you to become a better person in the world. And I like my brain, I like having a brain. Most people wouldn’t guess this because of the characters in my fiction, but I don’t even drink alcohol.

Where do you see the Muslim community in America headed in the future?

I’m actually very optimistic. The community is more open than it was when I first converted. The conservatives are learning to accept the progressives, and vice versa. I’ve had very traditional, “orthodox” Muslims accept me as their brother, despite some insane behaviors and opinions that appear in my work; and their kindness has enabled me to grow up a bit. They know where I stand, and I know where they stand, and we don’t have to agree on everything, but we can pray together, be family together. That means a lot to me, and I hope it represents something larger that’s happening in our community.

To learn more about Michael’s endeavors, check out his MySpace page, at:
http://www.myspace.com/michaelmuhammadknight