An interview with Eve Ensler, author of “The Vagina Monologues” and feminist activist. 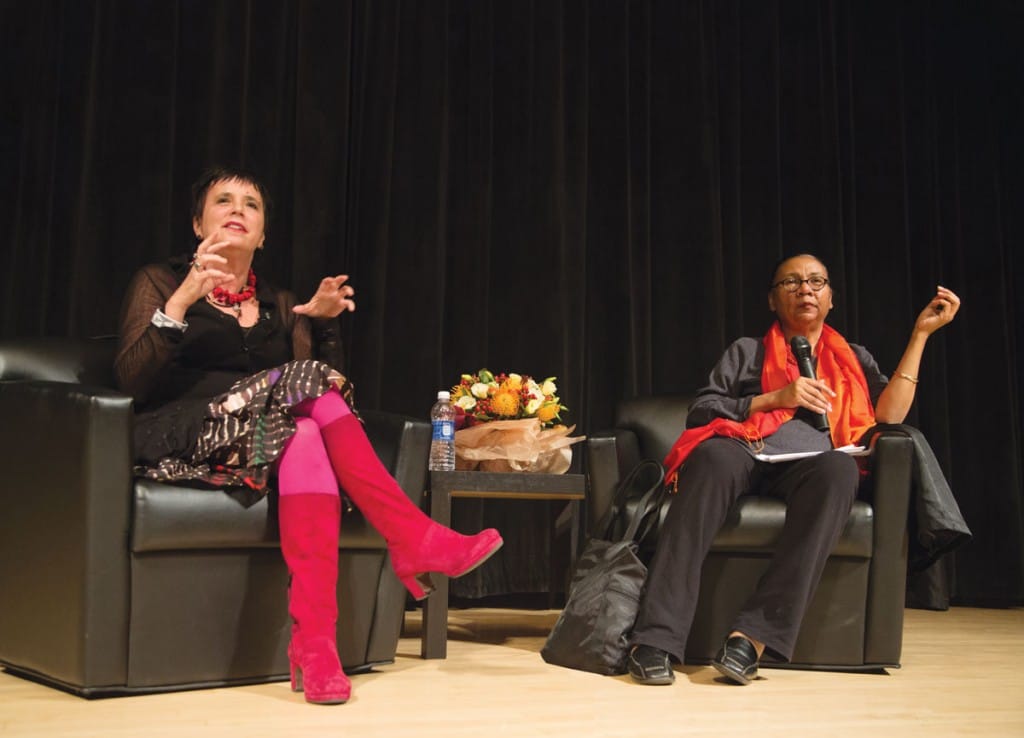 Eve Ensler is best known for her taboo-breaking play, “The Vagina Monologues.” She is also the driving force behind V-Day, a movement to prevent violence against women and girls. V-Day is celebrated on or near Valentine’s Day in more than 700 communities and college campuses worldwide and has raised $35 million for violence-prevention programs. Ensler has just released her first book written directly for the printed page, Insecure at Last: Losing it in our Security-Obsessed World.

Why did you write this book now?

I am overwhelmed by the obsession in this country with security. Everything seems to be about becoming secure. So I started thinking, Why, when this country is more obsessed with security than ever before, do I feel more insecure than ever before? What is that about? And what is security? Is security possible? Is it the point of our existence? Because it doesn’t feel like becoming secure is why I’m here.

If security is not the point, what is the point?

To learn how to love, connect, bring about peace, look at justice, look at how to reverse the current paradigm that is desperately rushing us toward our end. The more we become obsessed about being secure, the more narrow we become—the more fundamentalist, the more terrified of risk, and the more unable to step outside our own little tribes, frameworks, houses, and nations. The point is to become free: free of fear, free of attachment, free of jealousy, free of all those things.

In 2003, you wrote a letter to President Bush denouncing a paradigm of domination and violence in America. What is the key to getting more men to oppose violence against women?

Men need to start speaking a different kind of truth. I just finished a run in New York of my new play, “The Treatment.” It looks at what torture does to the torturer—how it shatters his soul. In some ways I am more proud of that play than of anything I have ever done, because it was the first time I was able to let myself climb into the heart and being of a man. It was a life-changing experience, because I really felt in my bones, in my cells, in my structure, the tyranny of patriarchy, the tyranny of the militarization of the soul. When men finally get to a point where they can openly fight against that kind of violence and domination, the world is going to shift. What we have to do to bring that about is the big question.

I saw a great movie recently, Half Nelson, in which a man committed violence almost because he didn’t know what else to do.

If you are brought up in a culture, as men are, that tells you from the time you are born that the worst thing you can do is feel, that the worst thing you can do is cry or express your vulnerability, what options are you left with? I mean, if I couldn’t cry, I would be in an institution. I don’t know what I would do to process the sorrow and loss and rage and heartbreak of being alive in this century. So, I think about men and ask myself, What do they do with that feeling? Where does it go? It seems logical that it’s going to turn into violence.

Do you think of yourself primarily as an activist now, rather than a writer?

I’m trying not to use any labels like that anymore, because then I get into this duality: am I a this or a that, as opposed to a human being? All of us, including me, like to know who people are. We like to say, “He’s a that; she’s a this.” Then we think we know who they are. What I’m realizing more and more is that I don’t know who I am. This process of living is evolving me all the time.

What are some of the challenges and obstacles you are encountering these days in that process of evolution?

Does your work have a spiritual basis?

I don’t see the kind of work I do and spirituality as separate. Anything that attempts to grapple with ambiguity or mystery or love is spiritual at its core.

Are you familiar with the work of Pema Chödrön?

I’ve read almost everything she has written. In fact, it’s funny you should bring that up. I was dreaming last night that I would go away for two weeks and be mentored by her and study under her. That’s how I got myself to go to sleep.

How do you stay whole and human in the middle of the whirlwind that must be your life now?

I have certain practices. I’m a Buddhist; I’ve been practicing for years. I chant. I do a lot of exercise. I try to let myself feel whatever it is I’m feeling. I’m often in the midst of a lot of people’s pain. A lot of people feel compelled, on the basis of what I’m sharing, to share their pain with me. It’s an enormous privilege, but I feel honored, and it’s also extremely painful. Yesterday I had one of those days when I was quite low and I cried for a good part of it. Now I’m better. When we cry, when we take the time to go through what we’re going through, it passes. Many of us don’t think we have the right to feel what we are feeling, so we hold on to it. It metastasizes and makes us feel worse and worse.

What do you hope to accomplish next?

I’m very happy with the theme of V-Day this year, “Reclaiming Peace.” Our spotlight is on women in conflict zones. I think we’ll be doing V-Days in Beirut and Africa. Hopefully we’re going to Darfur.

Many writers and activists aim to get this kind of attention for worthy projects. “The Vagina Monologues” is now being staged in ninety-one countries and thirty-five languages. Why did it succeed where others have not?

The play let women say what they wanted to say, and by doing that, it empowered them. It also had to do with the simplicity of telling one’s story. When you are younger, you think everything is complicated and out of reach. Then you get older and realize that everything is very simple in a certain way. If you just tell the truth, things change.