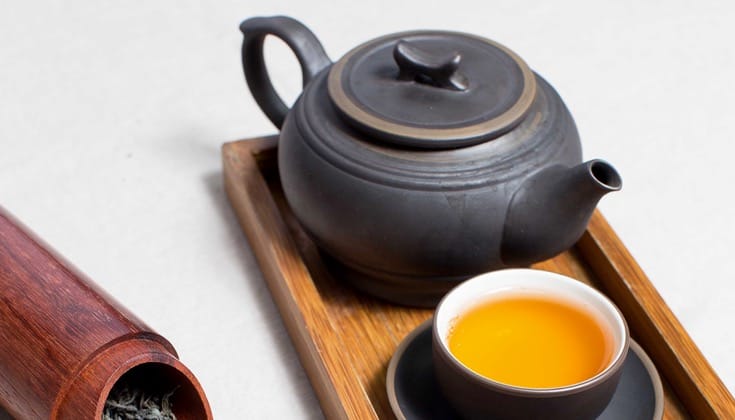 We sat without the marking of periods, without bells (or whistles). It was the last night of the year. I’d asked the tea master to set up at the back of the temple hall and prepare tea every four hours or so, and instructed an attendant how to quietly invite those sitting to line up when it was their time to be served. But he surprised me, bringing the first cup forward, bowing toward the altar, and then to me in the teacher’s seat. The grass scent blossoming like a green roar in the dark. Turning the cup, lip to edge, suddenly nothing but bitter froth.

“Zen and tea are of one taste.” That famous phrase was coined in the fifteenth century by Zen adherent Murata Juko. His story is one of the charms of William Scott Wilson’s new book, The One Taste of Truth: Zen and the Art of Drinking Tea. We learn that Juko, a somewhat obscure Zen priest, was struggling with some attitude issues. Wilson writes that he was “troubled by his own slack attitude toward his priestly superiors and the fact that meditation simply put him to sleep.” Juko conferred with a doctor, who prescribed tea, and Juko then went on to build a small thatched hut for tea drinking, hang a scroll in the alcove for inspiration, and not only seemed to turn his personal issues around but also set in place an aesthetic and spiritual direction lasting centuries. That’s quite a cup of tea.

The first myth most of us hear about drinking green tea is that Bodhidharma, the First Ancestor of Chan (Japanese: Zen) Buddhism, was so sincere about staying wakeful that he yanked off his eyelids. Wherever they landed, tea plants sprouted, becoming the brew of choice for future enlightenment-seeking monks.

In The One Taste of Truth, Wilson, one of the foremost translators of traditional Japanese texts on samurai culture, offers us a more developed, exquisite invitation to the dance of tea culture, its history, and its evolution alongside Zen. In his introduction, he informs us that true ceremonial tea drinking began with Eisai, who brought the precepts of Chan Buddhism from China to Japan, along with tea seeds, bushes, and the customs of tea he had learned in Chinese Zen temples.

What is perhaps most interesting about Wilson’s book is his approach to this “one taste” of tea and Zen. After a few lines acknowledging the obvious—“what is called in English the Tea Ceremony (chanoyou) incorporates the mindfulness, quiet, and simplicity required for Zen study,” and “what is most important to both is the awareness that each and every moment is unique, and is to be valued and savored…”—he makes an apt bow to the possibility of saying too much. He points to the presence of the ubiquitous hanging scroll at the entrance to the place of practice, and in doing so recreates the necessary pause, the breath at the entry, the liminal. Most of the book illuminates the words and characters on these scrolls, focusing on the single-line phrases (ichigyomono) from the Zen classics, familiar Confucian and Taoist works, or classical Chinese poets. A hunger of sorts is created to see the scrolls…but that is a different book.

So the grass-hut practice of Murata Juko had been in place, in a way, in China for several hundred years prior, when monastics would appreciate the calligraphic works of their teachers or their teachers’ teachers. It would be brought into fine focus by the most famous of all Japanese tea masters, Sen no Rikyu, who would ask that the “essential virtue” of the calligrapher be part of the host-guest experience, not just the meaning of the brushed words. Yet in Murata Juko there’s a possibility to see into the cup, to taste that moment when medicine and sickness no longer divide a body, and, as they say, history begins fresh.

Perhaps it’s just that I like thinking of Juko’s hacking miscanthus to make that hut. There’s that moment when after all the promises and vows, after all the public ceremonies, you notice that you haven’t done your own work, not quite. I find it’s perpetually this way, noticing that we’re still somehow falling asleep. That there’s an edge to our promise, a condition on our practice.

I think of one of my early training periods at the Zen monastery, as I was transitioning to a more senior role. One of the routines was to go several times a day to each of the many altars in the monastery and do a series of bows and silent services. All my life I had disliked public shows of earnest behavior, simply found them distasteful. As I moved through this requirement as part of becoming a Zen priest, I could see so clearly the difference between the relaxation and sheerness of my practice when I was “alone” versus how it felt when I’d come into the dining hall, where I’d be aware of others’ observation while they were hanging around prior to the noon meal. To generally reside in an interior way in the midst of others was easy. But I’d not yet learned how to be on focus while I was, nominally, in the center, and let there be a lightness about it all. What is it to build a hermitage “within the city,” selfless and boundless, perhaps inspired by Tao Yuan-ming’s lines:

I built a hut right in the city,
But there is no noise of horses and carts.
You ask me how this can be so,
But when the mind is far away, the land follows of itself.

Wilson makes clear that such ichigyo-mono are no longer limited to tea room or zendo—but they appear with equal frequency in restaurant alcove and martial-art dojo. The threshold is everywhere. His gift in this volume is both the way he opens up some of the cultural allusions that enrich appreciation of the scrolls and how he creates each as an indication that when “tasted” deeply, life itself is more genuine, less guarded.

If there is a caution, it might be simply that as with any gathering of tastes, some are richer than others. For those who love word and character derivation, Wilson is generous. In sections such as Zen, nen, we learn that on its own the character connotes a condition of doing something with such totality or completeness that nothing remains. And then the gift of the translator’s extra touch: “Originally the Chinese character meant ‘to burn’ or a ‘flame burning’… the character compound often translated as ‘nature’ or ‘spontaneity’… this [has been termed] the ‘self-immolating’—again with the idea of an entity being so itself that there is nothing left for anything that is not itself.”

In this same thickly composed section, Wilson goes on to argue that “the compound term for ‘nature’ reveals one fundamental difference between Eastern religions, in which the world is self-generating, and the Western Semitic religions of Judaism, Christianity, and Islam in which the world is created by an outside force (i.e. God).” Again, as with Juko’s cup of tea, a world or two is contained. This is reading to slow down with, to sip and savor.

To my eye, the selections may strike some as being slightly heavy on what could be considered the samurai end of the scale. There are a good many with the taste of jukunen fudo, “at peace and unmoved.” Wilson explains that this seems to come directly from the Confucian commentaries on the I Ching, one of the most ancient Chinese works extant, studied in Japan from the eighth century if not earlier. “When the water flows quickly, the moon is not carried along,” an ichigyomono from the Zenrin Kushu often found in tearooms and dojos, is explained: “If your training is sound, you will remain unperturbed, regardless of the situation.” It is inarguable that this is an aspect of wisdom; whether it is fully balanced remains, I think, arguable.

There is also the manners aspect of the included ichigyomono: “A gentleman’s relationships are light as water.” This is glossed as being about not allowing for “familiarity” in our relationships, to which Wilson adds the comment, “which often breeds contempt.” We learn from Chuang Tzu that the “relationships of the man of little character are as cloying as sweet wine.” The advice continues that should we be like water we’ll glean affection, whereas if we carry on like sweet wine distance will result.

This may or may not be helpful to know, but we’re at a different level of instruction, to say the least. Also by this point a sense of something somewhat male begins to be a mild undercurrent. Female readers will also note that as a translator, Wilson’s choice is to maintain the gendered nature of the original texts, so advice arrives in the classic Confucian form: “The Way of the Gentleman…,” etc.

Given that there are 109 ichigyomono dealt with, however, the book offers many chances to simply open to a page and taste directly. Indeed, my favorite way of being with the book, after reading through once and sensing the gentle organizing principles Wilson has used to segment the sections, was to do just that: randomly enjoy a single “teaching” for an entry into my own evening tea, entering that place where the grasses sometimes roar.