Mystery of Life showcases Rabkar Wangchuk’s journey as a young monk in India to his early days in the United States through 36 artworks and additional sculptures. 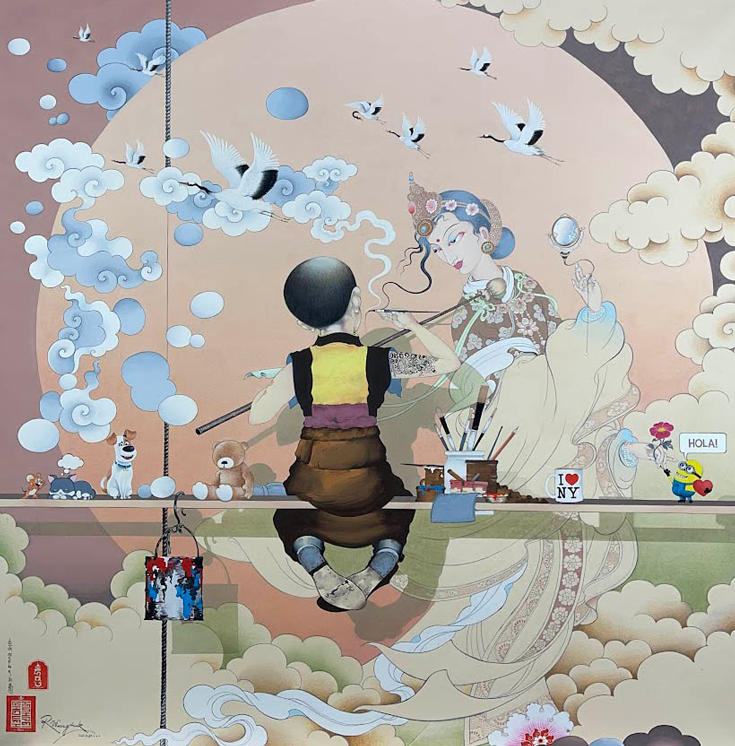 Rabkar Wangchuk, a former Buddhist monk and Tibetan-born artist now based in New York City will premiere his first solo exhibition Mystery of Life on June 7, 2022, at Here Now Space in the West Village.

The exhibition is curated by Paola Vanzo, a longtime friend of Wangchuk’s. The two met years ago through Vanzo’s work in the Tibetan art field when she asked Wangchuk to be part of an exhibition she was organizing. Wangchuk’s first solo exhibition has been a long awaited opportunity, the two say. The idea was sparked prior to the COVID-19 pandemic when Wangchuk expressed his desire to have a solo show, and asked Vanzo if she would be the curator — an idea she was at first hesitant toward.

“I’m not a professional curator,” says Vanzo. “I love the art world. I’ve worked in the art world, but I don’t have the power of a big art gallery. I just have a lot of passion, energy, and the friendship I have with him personally.”

At the onset of the pandemic, Wangchuk’s mother passed away. He went to India to be with her, and when he returned, he knew he wanted to dedicate the show to her memory. 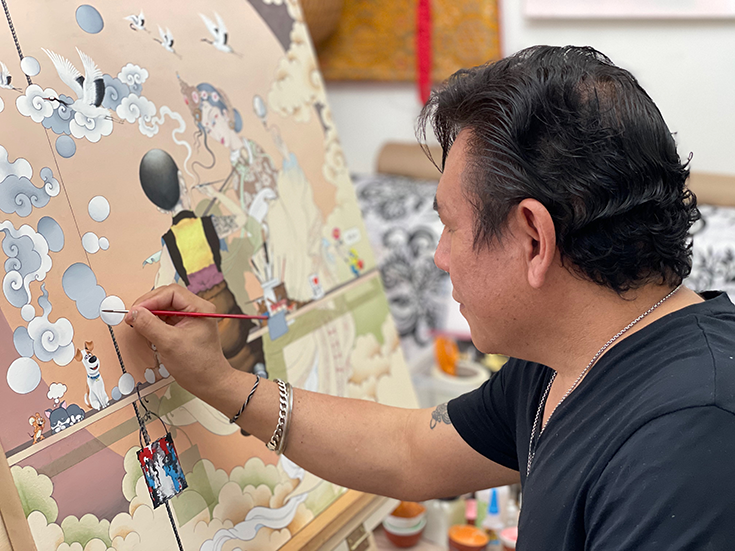 Rabkar Wangchuk in his studio working on “Spirit Connection.”

“In this pandemic situation, many people lost their beloved, not only me,” says Wangchuk. “We are facing a very difficult situation, but art helps to make your spirit calm…  I put it all into the canvas to present my memories.”

As well as telling his life story, the works featured in Mystery of Life reflect on “a mother’s everlasting love for her child despite having been separated by two oceans.” In each piece, Wangchuk “utilized his paintbrush and canvas to transform his grief into colors and artistic expression,” an act of meditation on the “fleeting moment unfolding into the unknown.”

As they set out to plan the exhibition, Wangchuk and Vanzo would meet outside of Vanzo’s house, masked and at a distance. The first painting he showed her was Heroes, which depicts a young child with a mask, the words Stay home / Save lives scripted beneath her. 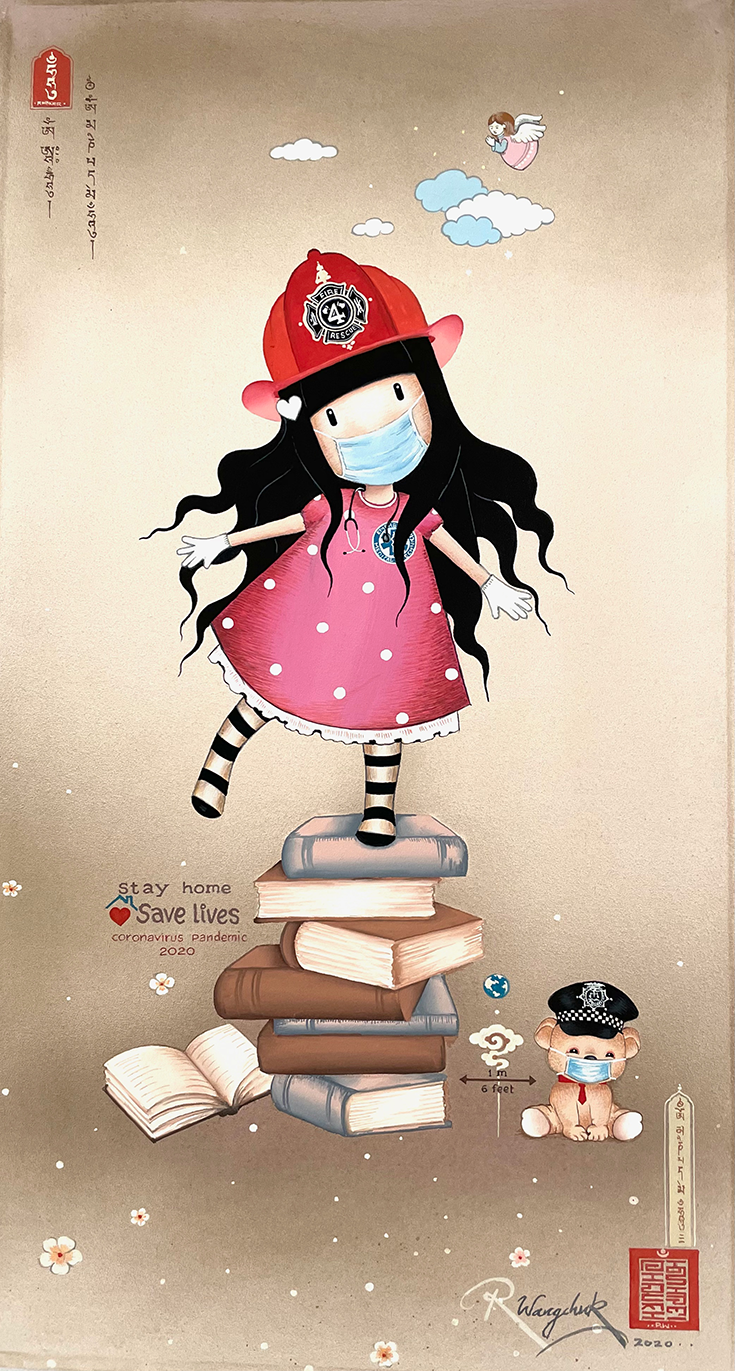 “He told me ‘I want to dedicate this to all of the nurses and working and front liners,’” says Vanzo.

“When I saw that piece I said ‘OK I’ll do it,’” she says. “The moment that I said yes, it gave him the input to pour his soul out in every piece yousee in this exhibition. I think it’s his best work so far.”

Wangchuk began his life as a monk as a child. At the age of seven, he entered the monastery where he remained for 20 years before leaving to begin his life as an artist and layman. The character of the “small monk” is seen throughout his work, representing “the character of my life,” he says. This small monk also represents his personal journey from monk to layperson and the difficult path from India to New York City.

“I became a monk, then converted to a layperson,” says Wangchuk. “A monk’s life is a life of solitude, but a layman has more of a connection and communication with the world. I’m trying to show that in my paintings.”

“The reason I left my monk life is if I continued as a monk, I wouldn’t have been able to share and connect with more people,” he says.

In his painting The Land of Opportunity, Wangchuk is represented as the young monk, wearing a backpack and clutching a teddy bear as he stares at the New York City landscape.

“The silver lining in this piece is that despite all the challenges, despite the difficulties coming here on his own, he had the baggage — which you see in his backpack — of his culture and his hard work. He had  all of the things he learned being a monk. And he never gave up,” says Vanzo. 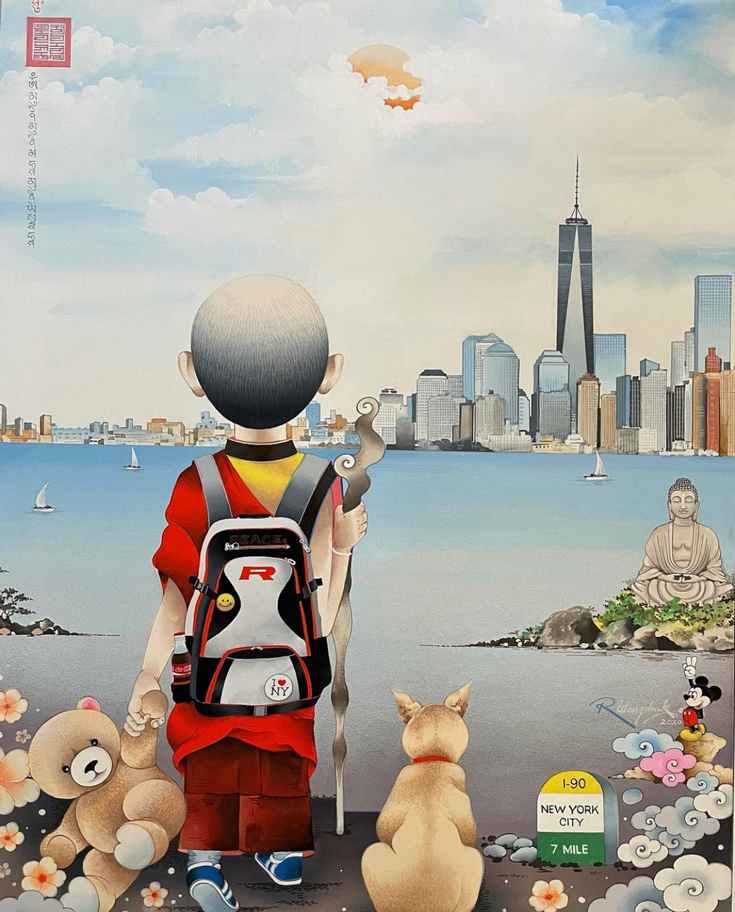 “The Land of Opportunities (monk at NY harbor),” pigment color on canvas board; size, 18 x 24 inches

Familiar pop culture figures also appear throughout Wangchuk’s work, from Mickey Mouse to Dumbo and Bugs Bunny. These figures act as a bridge from his spiritual traditions to the modern world, telling traditional stories through familiar characters.

“He’s trying to communicate the spirituality that comes out of his artwork to make it accessible, transforming figures into images and pop icons that are common. This way, the message might go further. People will be inquisitive and ask him about it, like ‘Why is Mickey Mouse there?'” says Vanzo.

When Wangchuk left the monastery in his twenties, his master gave him a special piece of advice.

“He told me ‘No matter what kind of challenges you face, always stand tall, and move shoulder-to-shoulder with people,” says Wangchuk.

With that strength in mind, he made his journey to New York, becoming the artist Mystery of Life showcases today.

The exhibition begins June 7 with an opening reception and run until June 21, 2022 at Here Now Space at 132 Perry Street in New York, NY. Wangchuk and guest artist Martello will give an artist’s talk on June 11, and Buddhist teacher David Nichtern will lead a meditation practice at the exhibition on June 15.