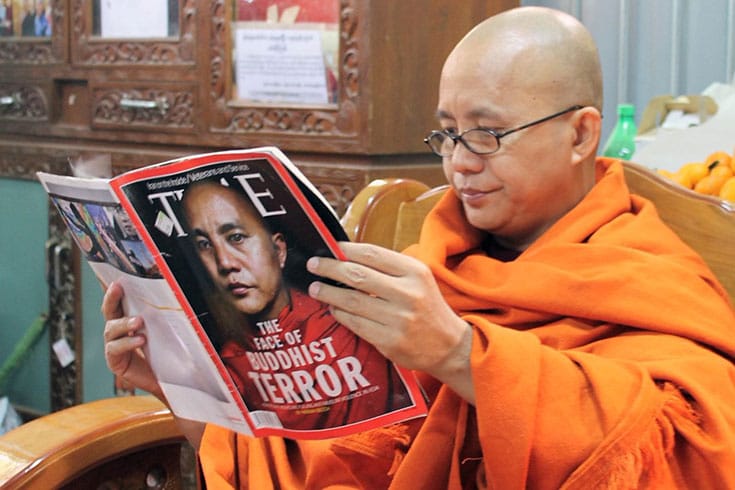 A column in "The Myanmar Times" asked readers to guess the author of a xenophobic comment: Donald Trump or Ashin Wirathu, the man known as "The Buddhist Bin Laden," pictured above reading a "TIME" magazine article about himself. Photo by Lily and Maung Thin

A 34-year-old youth group leader affiliated with Ma Ba Tha, named Win Ko Ko Latt, said, “I like Donald Trump because he understands the danger posed by Muslims. It shows that our struggle is a global one and that Islam isn’t just a threat to Myanmar but to the entire world.”

Myanmar’s anti-Muslim movement is led by Ashin Wirathu, the famous monk who TIME Magazine dubbed “The Face of Buddhist Terror.” Last month, The Myanmar Times ran a column titled, “Who said it: Trump or Wirathu?” The column asked readers to guess who said “There are people that shouldn’t be in our country. They flow in like water.” (That’s from Trump.)

Trump’s growing popularity is a serious worry for the Rohingya people, members of Burma’s persecuted Muslim minority group. One man, whose village was torched by a Buddhist mob in 2012, told The Daily Beast, “[Trump] talks about Muslims the same way as some of our government officials. This is something that makes me nervous because the international community is our only hope.”

And for more on Donald Trump: