Activist Alex Rodriguez looks back on the work Buddhists have done to foster at the Oregon ICE headquarters in Portland. 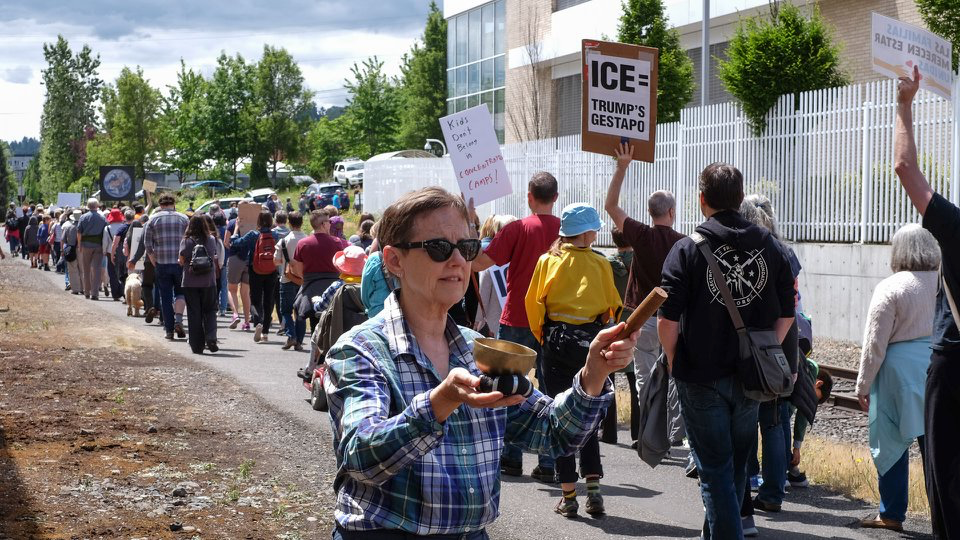 Shocked and heartbroken by the recent adoption of the Trump administration’s cruel “zero tolerance” policies, on June 14, over 400 protestors gathered to share space and demand change at the Oregon Immigration and Customs Enforcement headquarters in Southwest Portland. Like many other ICE protests around the country, demonstrators marched carried signs and marched diligently. Different from other protests, though, was the sound: quiet. Only gongs and prayer bowls gently sang out over a hum of stoic movement and passing traffic as the protestors marched in silence, surrounding the building in one continuous circle.

For many gathered, the event was their first encounter with ICE. But, for a few of us, this was just the latest iteration of a monthly ritual, which we started in July 2017, called “Thawing ICE: Mindful Walk for Immigrant Justice.”

Three days later, on June 17, 2018, the building was transformed again, this time by a different group of activists who pitched tents and occupied the space around the offices. By Wednesday, the group had successfully shut down the building and the movement was growing into a flourishing, spontaneous encampment with hundreds of people. Most of the group was unaware of our preceding silent protests. However, our shared space has made us part of the same ripening historical moment — one that continues to unfold as the encampment enters its second week.

The power and intensity of the events that have unfolded in recent weeks are a precious reminder of the truth of impermanence.

I was one of the engaged Buddhists involved in organizing the monthly walks. Back in February 2017, a group of engaged Buddhists gathered to explore how to bring our practice to bear on the threats posed by the new presidential administration. The meeting, called by the Portland Buddhist Peace Fellowship (PBPF), attracted over 100 people. Few of us had any clue what meaningful action would look like. But we each had tidbits of information about various organizing efforts we hard heard about across Portland. On such effort was by the Interfaith Movement for Immigrant Justice (IMIrJ), which had spent years organizing against the expansion of ICE’s hardline approach to immigration and detention.

Over the next few weeks, some of us attended IMIrJ meetings. The IMIrJ leadership announced a plan to facilitate a monthly series of vigils at the Oregon ICE headquarters, and we saw an opportunity for our mindfulness practice to be of benefit by helping to hold the space. Starting in July, we gave walking instruction at the building on the second Thursday of every month and then lead a silent walk around the building. Afterward, we offered space for debrief and discussion. We encouraged participants to bring signs expressing solidarity and the aspiration for the end of immigrant detention. We made a sign that read “We Are Here for You,” translated into the four most commonly spoken languages spoken by immigrants in Oregon: Spanish, Russian, Maya K’iche, and Somali. A few dozen demonstrators would show up, with varying degrees of experience of meditation and direct action. By the fall, the local newspaper, The Oregonian, had picked up our story and included our work as part of a feature on Portland’s year of activism.

As time went on, we recognized that, although our walk seemed to raise awareness about the activities that took place within the unmarked fortress, we felt heartbroken by the distance between ourselves — a group of mostly white activists and Buddhists — and those directly impacted by ICE. Many participants had never been within 20 feet of a detention facility. For some, that distance was a poignant reminder of our privilege, knowing what continued apace on the other side of those walls. So we started preparing for a larger gathering in July, our one-year anniversary, to bring enough protestors to the space to completely surround the building with compassion and intentions of transformation.

Then, events began to spiral out beyond what we could have imagined. As news of Trump’s “zero tolerance” immigration policy and the separation of children from their parents began to spread, word of our monthly vigil spread through the #FamiliesBelongTogether campaign. In June, a month before our planned anniversary event, we accomplished our goal of encircling the building in silent, compassionate protest.

The power and intensity of the events that have unfolded in recent weeks are a precious reminder of the truth of impermanence. Given that so much is in flux right now, and out of our intention to be accountable to the emergent group processes of the encampment’s intrepid organizers, we’ve decided to wait and see how our one-year anniversary takes shape. In the meantime, we sit in solidarity with the aspiration that we have been holding all along: for our city, state, and society to live up to our billing as “sanctuary” for those seeking a better life. May this aspiration spread, and may our work be of benefit to our nation’s current and future immigrants.

Alex W. Rodríguez is a writer, trombonist, and organizer currently serving as General Coordinator for the Bhumisparsha sangha and as Board President for Buddhist Peace Fellowship. He holds a PhD in Ethnomusicology from UCLA, where his research focused on jazz clubs around the world and the communities that sustain them in Los Angeles, California; Santiago, Chile; and Novosibirsk, Siberia.