It’s been twenty years since the genocide in Rwanda, which claimed more than a million lives. To mark this anniversary, Zen master Bernie Glassman and Grover Genro Gauntt of the Zen Peacemaker Order traveled to Rwanda where they led a multi-faith, multi-national bearing witness retreat in April. Here, one participant, Russell Delman, recounts his moving retreat experience. Please note that some of the names have been changed to protect confidentiality. 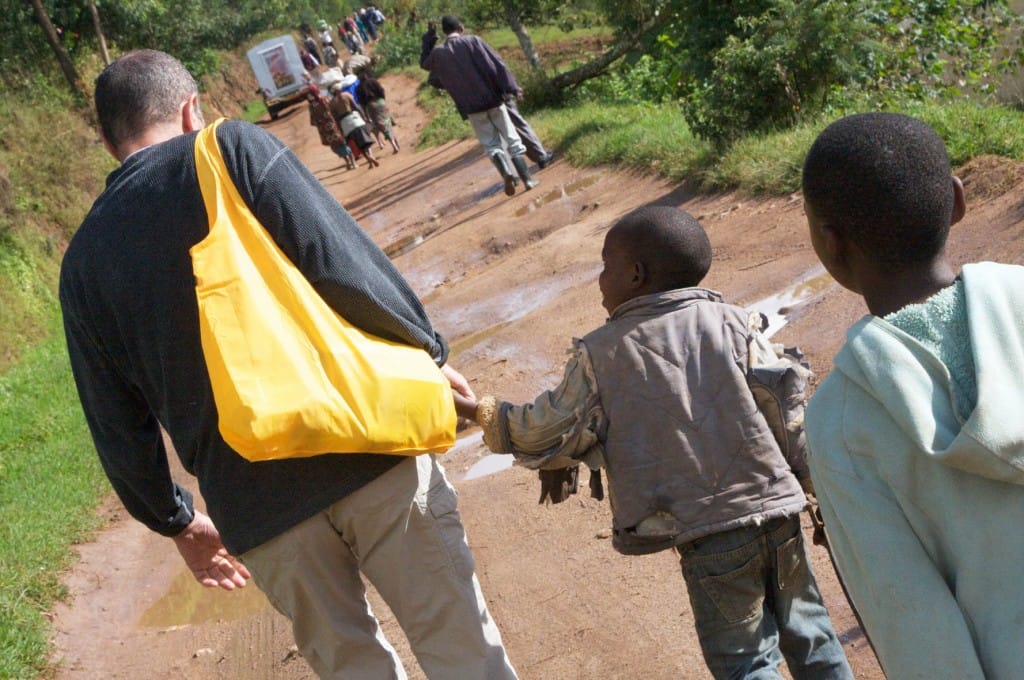 On the last day of the retreat, I’m walking with Claudia, a new Rwandan friend. Earlier in the retreat, she asked for guidance in meditation to help with painful thoughts that wouldn’t stop, and I was grateful for the opportunity to offer some guidance. Today she tells me about how her parents and four of her five siblings were killed when she was six years old. A Hutu man protected her, but later he was killed by other Hutu angered at his kindness. Being with this tender young woman—bearing witness to her courage, pain, intelligence, and life-forward intention—my heart is deeply touched.

To bring the practice of sitting meditation into social action, Zen teacher Bernie Glassman created “Bearing Witness Retreats.” For more than twenty years, he and the Zen Peacemaker Order (ZPO) have been conducting these retreats at Auschwitz and Birkenau, the concentration camps in Poland. Then about six years ago, members of a Rwandan reconciliation group, Memos: Learning from History, attended the retreat and asked for something similar in their country. This retreat I am on grew from that request.

ZPO has three main views or tenets: 1) Not-knowing (putting aside all opinions, conclusions, and certainties), 2) Bearing witness (being present with all the joy and sorrow within the situation you are in, and 3) Loving actions toward yourself and others.

At Auschwitz the practice is to invite healing by being present with the suffering of all beings: prisoners, guards, survivors, the dead, and the land itself. Through meditation, chanting of names of the deceased, and respectfully walking around the entire site, the history is recalled and experienced with tender, open, and broken hearts.

In Rwanda, where virtually every person in the nation is carrying the trauma of the recent past, sitting with the intention of bearing witness is a huge challenge. Our group of about fifty-six people is equally divided between Rwandans, plus two Congolese, and Westerners from seven different countries. We go every day to the Murambi Memorial Site, a place where 50,000 people were massacred, and we sit together around a candle and some sacred objects with the intention of speaking from our hearts. Being in the presence of authentic, heartfelt truth-telling allows an intimacy and trust to grow. Bearing witness to ourselves and to each other creates a healing environment. The power of humans connecting from their hearts cannot be underestimated.

Each person, African or Westerner, is processing deep personal and societal wounds through the power of the Memorial site. In numerous rooms, lying on wooden tables, there are many skeletons, including those of babies and children that have been preserved in lime emitting a sickening stench. The smell lives in my nostrils. The bits of clothing and tufts of hair make the genocide so indelibly real. The idea is to make the reality undeniable. As with the German holocaust, there are those who will deny or minimize the horror. We must create conditions so that humanity never forgets that this kind of atrocity is possible.

In the first days, we meditated by the mass graves sometimes in silence and at other times reading the names of the dead. It took some time to realize that this was socially inappropriate and very frightening for the Rwandans. Now we sit in the more neutral setting of the Memorial Site and speak the names there. For me, saying and hearing the names is very important. I cannot process a large number of deaths; my body goes numb when I hear such a big number. But with each name, I can sense this one individual and my heart gets torn open. Maybe this kind of remembering brings solace to the soul of the dead; this I don’t know. But I do know that in the process of remembering, in experiencing our heart connections to unknown people, we become more human. I had the added potency of reading names on Good Friday. In this Christian country, calling the suffering of Jesus Christ on the cross added a whole other level of meaning.

In the evenings we hear testimony from members of the three groups: survivors, perpetrators, and rescuers. Hearing the stories of people who I’m getting to know is the most heart-wrenching part of the whole retreat. People just like you and me went through these experiences. I can feel my deep inner connection to each person and each story. Each individual is part of a whole family of tragic stories. Through the eyes and words of one person, their relatives also somehow appear in the room.

Anna tells her story of hiding in the marshes, crawling in the mud with snakes for many days. Dead and dying bodies surrounded her. Teeming with lice and desperate with fear, she experienced the daily struggle to survive. As she speaks, sitting nearby is Aaron the man who cut off her hand and helped kill her family. Aaron expresses sorrow for his actions yet his testimony, which includes various deflections, does not satisfy many of the Tutsi who are present. Is forgiveness even thinkable?

Rosanne, a Hutu sat with Theodore, a thirty-one-year-old Tutsi man who she saved when he was eleven, at immediate risk of her own life. Her husband was scared and angry that she was saving Tutsi. Theodore’s family had been killed while he escaped by running and hiding. After he survived without food or water for five days, Rosanne came upon him. Rather than turning him in, she sheltered him. How does one person find such courageous kindness when almost all others cannot?

Jeannette, participating in the retreat with her twenty-one-year-old daughter Paula shows us the place where she hid twenty years ago holding Paula to her chest. She watched as her husband and two sons were killed nearby. She was attacked with rocks and barely escaped. What lives in mother and daughter after such an event?

Roland, an ex-Belgian soldier who tried to help in Rwanda, gives his harrowing, tearful story for the first time in twenty years. What does it mean to help in such a situation? The Belgian government was part of the horrific, colonial history that created the great division between the Hutu and Tutsi. What is our collective responsibility for the actions of our governments? As an American, I have my first experience of collective shame for the actions and negligence of my country as I sit with all these people.

Can we see that every one of us is a survivor, a perpetrator, and a rescuer?  Can such an extreme situation as Rwanda help us to reflect on our own life?

Within me is one who has survived challenging situations. I am also a survivor. Raised by alcoholic parents, I witnessed some harrowing scenes as my mom dealt with manic-depression. Later, as an adult, my life was threatened when I was attacked at gunpoint while counseling a distressed ex-convict at a drug rehabilitation center. As with all of us, my list of personal challenges goes on. While mine were not near the level of my Rwandan friends, it’s not helpful to compare suffering. Mine is mine. Yours is yours. Had I been born elsewhere I might have been one of the survivors in Rwanda.

I have perpetrated violence on others in my life whether through word, thought, or deed. At times I have asserted my desire to dominate through the use of my voice and intellect. As a young man I hit people with my fists. I have often treated the Earth with carelessness as if I had dominion over it. Also, who has not violated their own inner life with vicious judgments? For deep healing to occur these perpetrations must be seen and acknowledged and alternatives must be uncovered. Seeing all this, I recognize that had I been born elsewhere I could have been a killer. The atrocities that happened in Rwanda reflect the same impulse toward domination that exists in me, just acted out in another social milieu.

I have rescued others in my life. Who has not protected the weak or fed the hungry at least some of the time? I have been blessed many times with opportunities to offer healing, solace, and care. Had I been in born in another place I might have saved some threatened people.

Bearing witness is being present with all that arises in body, feelings, and thoughts. And the reason we bear witness is that anything exiled from our care will remain unprocessed and, therefore, will keep us from feeling whole. All that is rejected will be carried as a kind of tension in our bodies and will create a closing of our hearts.

Integrating my experiences from Rwanda brings up vivid questions: When do I turn my back on life? How do I turn away from the suffering within and around me? What in my inner and outer world do I exile from my realm of care? For me this is clear: bearing witness is the ground of true healing for individuals and for our world.

Russell Evans is the director of Transition Lab, a school that teaches people realistic ways to take radical steps toward creating a more just, fun, and beautiful world. Transition Lab powers this work by meeting basic needs through relationships rather than money. Its students develop ways of living that allow them to use their gifts to create better livelihoods for a new economy.