In the aftermath of the mass shooting that killed 11 people on January 21 at Star Ballroom Dance Studio in Monterey Park, California, Kathy Yep reflects on the meaning of safety and healing in her community. 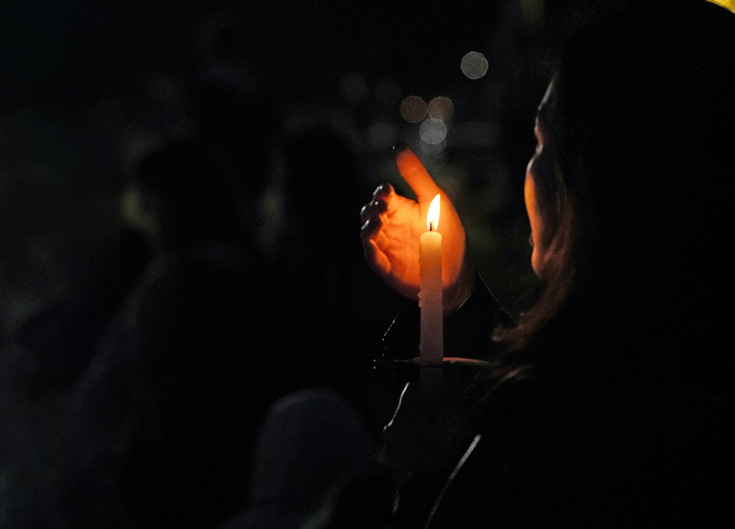 As the news of the mass shooting in Monterey Park unfolded, my heart sank as I recognized the building behind the yellow crime scene tape. I am a longtime resident of Monterey Park and a college professor. My students and I tutored participants of the adult literacy program at the public library not too far from the site of the mass shooting for over ten years. When I saw the grainy photo of the shooter, Huu Can Tran, I felt like he could be an uncle in my family — or perhaps someone I’d met for tutoring at the local library. My mind raced as I began to think of those in my community. I struggled to practice returning to my breath and the present moment.

How do we recognize the suffering in this moment and return to our breath?

At the library, immigrants and refugees worked with me and my students to prepare for the U.S. naturalization exam and practice conversational English. An older immigrant man, “Julian,” always showed up early to our class. After much time together, he shared the cumulative grief of his experience being imprisoned in a “re-education camp” after the U.S. military left Vietnam. He reflected on  the challenges of surviving as a working-class, Asian male refugee in the U.S. “In my own language I can say everything,” he told me. “Here, I am nothing.” His speaking and sharing his story in our class was a form of practicing the first noble truth with sangha. As we breathed together, we held his acknowledgement that there is suffering.

A married couple, “the Lees,” would come to class diligently. It slowly came out that they loved to ballroom dance. Their faces lit up as they described dancing in Monterey Park. For them, dancing was a space of freedom, joy, community, and creativity in the face of past historical trauma and current uncertainty as low wage workers seeking U.S. citizenship. My students and I learned that they each survived violence when war consumed their country of origin. At the same time, they eagerly studied even as they struggled to say words found on the U.S. naturalization exam like “constitution” or “George Washington.” When they taught us their favorite dance — the waltz — we noticed their inhales and exhales as they moved through the steps. Drawing from their love of dance, we’d break down the word “Washington” in relation to inhaling and exhaling. Finally, we practiced saying the word “Washington” (Wash-ing-ton) to the rhythm of the waltz (slow-quick-quick). This allowed us to create a link between their breath practice while dancing to breathing through the anxiety-inducing U.S. naturalization exam.

Since the mass shooting, I’ve been continually checking my email and the news to see if Julian, the Lees, and others are listed as dead. After the shooter, Mr. Tran, was found dead after a standoff, I keep seeing the refrain that we are now “safe” — that we should heal as a community. I keep mulling over these words: “safety” and “healing.” What does it mean to be safe in this situation? What does it mean to heal? How do we recognize the suffering in this moment and return to our breath?

As we practice with these questions, we must also reckon with and work to transform the reality that violence, war, and militarization are seen as normal in our lives. According to the news, the shooter, Mr. Tran, had a semi-automatic handgun. It seems he had an extended magazine attached to his gun. These types of guns are assault weapons. When a shooter pulls the trigger, or one bullet is fired, a new bullet is automatically loaded. According to the Giffords Law Center, assault weapons are meant to kill on a mass scale. They are supposed to shoot a large number of people at a rapid pace and in a high volume. They are designed for the battlefield and to kill as many people as quickly as possible. Yet, this was used in a dance studio.

The shooter in Monterey Park is connected to many of the deadliest shootings in modern American history. All these shooters used assault weapons equipped with large-capacity magazines — from Monterey Park to Uvalde, Las Vegas, Orlando, Sandy Hook Elementary School, Aurora, and Dayton. All these communities faced weapons designed for war, deployed in their everyday lives – where they danced, where they went to learn, where they went to see a movie.

As I wait to hear if Julian, the Lees and others are alive, my heart hurts. I yearn for us to ask, reflect, and act upon deeper questions. Mr. Tran acquired assault weapons meant for a battlefield and used them in a dance studio. Just as Julian, the Lees, and I notice suffering and our breath at the Monterey Park library, I want us to notice how war, gendered violence and militarization impact our daily lives. How did war, violence, and militarization affect Mr. Tran as an Asian male and those around him? How were his basic needs of food and mental health care needs met or not met before this mass killing? How was his cultural identity and fundamental human dignity respected or not before the mass shooting?

I implore us to reimagine what it means to be “safe” — a place to dance in community, to breathe and heal from war and trauma, to have our basic needs for food and mental healthcare met. “Safety” can be honoring and respecting fundamental human dignity, gender, and cultural identities, with mindfulness and breath — just like Julian and the Lees.

Kathy Yep is a practitioner in the Plum Village tradition and a qi gong teacher/student in the Wild Goose tradition of Yan Mei Jun lineage. She is also longtime resident of Monterey Park and a tenured full professor of Asian American Studies at Pitzer College of the Claremont Colleges. For more information: www.kathyyep.com