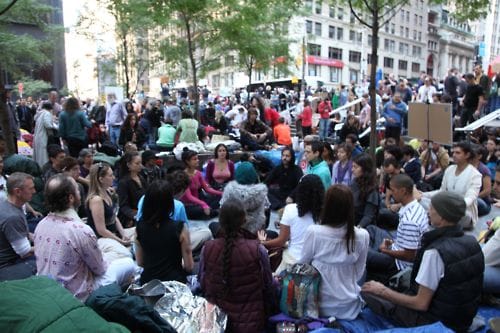 Michael Stone offers a Buddhist perspective on the Occupy Wall Street protests, and why Buddhists need to demand a fundamental change of our social systems.

A man stands on a bench in Zuccotti Park on Wall Street and chants a phrase from a meeting last night: “We don’t want a higher standard of living, we want a better standard of living.” He’s wearing a crisp navy blue suit and typing tweets into his iPhone. Next to him, Slovenian philosopher Slavoj Žižek, wearing a red t-shirt, is surrounded by at least a hundred people as he makes his way onto a makeshift platform. Since the protesters aren’t allowed to use megaphones or amplifiers, they have to listen carefully to the speaker’s every sentence, after which the speaker pauses, and those close enough to have heard repeat the sentence in unison for those farther away. When Naomi Klein spoke three nights ago, some sentences were repeated four or five times as they echoed through Liberty Park and down Wall Street, passed along like something to be celebrated and shared, something newborn.

They tell you we are dreamers. The true dreamers are those who think things can go on indefinitely the way they are. We are not dreamers. We are awakening from a dream which is turning into a nightmare. We are not destroying anything. We are only witnessing how the system is destroying itself. We all know the classic scenes from cartoons. The cat reaches a precipice. But it goes on walking. Ignoring the fact that there is nothing beneath. Only when it looks down and notices it, it falls down. This is what we are doing here. We are telling the guys there on Wall Street: Hey, look down!

We are awakening from a dream. When the Buddha was asked to describe his experience of awakening he said, “What I have awoken to is deep, quiet, and excellent. But,” he continues, “people love their place. It’s hard for people who love, delight, and revel in the fixed views and places of absolute certainty, to see interdependence.”

Over and over, the Buddha taught that what causes suffering is holding on to inflexible views. The stories that govern our lives are also the narratives that keep us locked into set patterns, habits, and addictions. The same psychological tools that the Buddha cultivated for helping us let go of one-track, rigid stories can be applied not just personally, but socially. Enlightenment is not personal; it’s collective.

The media love a good fight. In Toronto during the G20, those not involved in the protests were eventually distracted by the images of a burning police car in front of the banking sectors. With burning cars and young men breaking windows, there was suddenly a more entertaining target than the real issues of coming austerity measures and avoidance of policies that deal with climate catastrophe. With violent images prevailing, the protests lost momentum because the issues were forgotten in the media. This time, even though there is a massive police presence at most protests, the movement is not giving the media the images of broken windows that they love. Instead we are seeing a blossoming of creativity and hope.

We need a language now that allows us to reimagine what a flourishing society looks like. Any meditator knows that there are times when the thoughts that stream endlessly through awareness can eventually grow quiet. But it’s only temporary. The stories come back. But they return differently. They have more space and they are more fluid, less rigid. We need stories to think and make sense of an ailing world that needs us.

A more convenient way to apply the Buddha’s message to the social sphere is to remember that viewpoints never end or dissolve altogether. Rather, we learn to shift from one story to another, like a prism being turned, so that the possible ways of looking at our lives can constantly change. It’s time we adapt to our economic and ecological circumstances — uncomfortable truths we’ve been avoiding for far too long. This awakening is not just about economics, it’s about ecology and our love for what we know is valuable: community, healthcare, simple food, and time.

This process of dislodging old narratives is the function of both spirituality and art. Both ethics and aesthetics ask us to let go in a way that is deep enough that we find ourselves embedded in the world in a new way. If we think of this emerging movement as a practice, we’ll see that as it deepens and we let go of habitual stories, our embeddedness in the world deepens. Intimacy deepens. Relationships deepen. In the same way that moving into stillness is a threat to the part of us that wants to keep running along in egoistic fantasies and distraction, those with the most to lose are going to try and repress this outpouring of change. They’ll do this with police, of course, but they’ll also use subtle measures like calling us communists or anti-American, anti-progress, and so on. Our job will be to keep a discerning eye and watch for this subtle rhetoric that obscures what we are fighting for.

In the Lotus Sutra it is said that the quickest way to becoming a Buddha is not through extensive retreats or chanting but through seeing others as a Buddha. If you see others as Buddha, you are a Buddha. You remain human. You no longer try to get beyond others.

This student wants to transcend his life. He imagines that being a Buddha is something outside of himself, beyond his everyday actions. If you have to ask what awakening is, you don’t see it. If you can’t trust that you have the possibility to do good, to see everyone and everything as a Buddha, then how will you even begin? Our Buddha nature is our imagination.

These protests are reminding us that with a little imagination, a lot can change. We are witnessing a collective awakening to the fact that our corporations and governments are the products of human action. They aren’t serving anymore, and so it is in our power and in our interest to replace them.

We are not fighting the people on Wall Street, we are fighting this whole system.

Žižek, the protestors, the Buddha, and Shitou share a common and easily forgotten truth: We cause suffering for ourselves and others when we lose our sense of connectedness. We are the 99 percent but we are dependent on the one percent that control forty percent of the wealth. Those statistics reflect grave imbalance in our society.

Of course people are taking to the streets. In the U.S. 44.6 percent of the unemployed have been out of work for over six months. Long-term unemployment at this level is unprecedented in the post second world war era, and it causes deep strife in communities, families and people’s health.

This movement is also showing the power of nonviolence. Nonviolence, a core precept in my own Buddhist practice, is not an ideology. It’s the power of facing what’s actually going on in each and every moment and responding as skillfully as possible. The depth of our awakening, our humanness, has everything to with how we care for others. Our sphere of awareness begins to include everything and everyone. The way we respond to our circumstances shows our commitment to non-harm.

In meditation practice we can experience gaps between the exhale and the inhale, between one thought dissolving and another appearing. The space between thoughts is the gentle and creative place of non-harm. The meditator learns to trust that quiet liminal space with patience because from it, new and surprising ways of seeing our lives emerge. This is the inherent impulse of non-harm in our lives. It begins when we bear witness to the fading of one thought and the emergence of another.

These protests are exposing the gap between democracy and capitalism. The way democracy and capitalism have been bound is coming to an end. We want democracy but we can’t afford the runaway growth economy that isn’t benefiting the 99 percent. And if the 99 percent are not benefiting, the truth is, the one percent feel that. If there’s anything we’re all aware of these days, it’s that it’s not just twitter and email that connects us — it’s water, speculative banking, debt, and air, as well. When the one percent live at the expense of the 99 percent, a rebalancing is certain to occur.

If we can trust in the space where, on the one hand, we are fed up with economic instability and ecological degradation and, on the other, we value interconnectedness, we are doing the same thing collectively that the meditator does on his or her cushion. We are trusting that something loving and creative will emerge from this space that we create. It’s too early to say what that may be. It won’t just be a rehashing of an ideology from the past. These are new times and requite a new imaginative response.

The people of Occupy Wall Street and now Occupy San Francisco, Toronto, Montreal, Boston, Copenhagen and 70 other cities are trying to do both: take over a space that’s being wrested from the people, and also hold the possibility of a new way of living. What’s been stolen from the people is not merely a physical space (their foreclosed homes, for example) but space to rethink how our society operates and what to do about the bottom dropping out. Even the media, looking for a hook, can’t find one. “What are your demands?” the media keep asking. The answer: “It’s too early to say.” Let’ s see how much space we can hold, let’s see what our power is, and then we can begin talking about demands.

If we are going to fully express our humanity and wake up as a collective, we need to replace our youthful ideas of transcendence with the hard work of committing to the end of a way of life in which our work is not in-line with our values.

We’re demanding a fundamental change of our system. Yes, we all need to work through our individual capacity for greed, anger and confusion. This is an endless human task. We also have to stop cooperating with the system that breeds greed and confusion as it shapes our lives and our choices. This movement is the beginning of bringing that system to a halt. From here, anything is possible.

Shôken Michael Stone was an author, activist, father, and teacher who sought to illuminate the teachings and practices of Vipassana meditation, yoga, and Mahayana Buddhism for the postmillennial age. A Fellow in Residence at the University of British Columbia, he was the author of several books including The Inner Tradition of Yoga and Awake in the World. He passed away on July 16, 2017 at the age of 42.