It can be hard to do things you know are good for you. In this 2001 instruction from the Lion’s Roar archive, Cyndi Lee offers advice and a sequence of yoga poses for pushing through your own resistance. 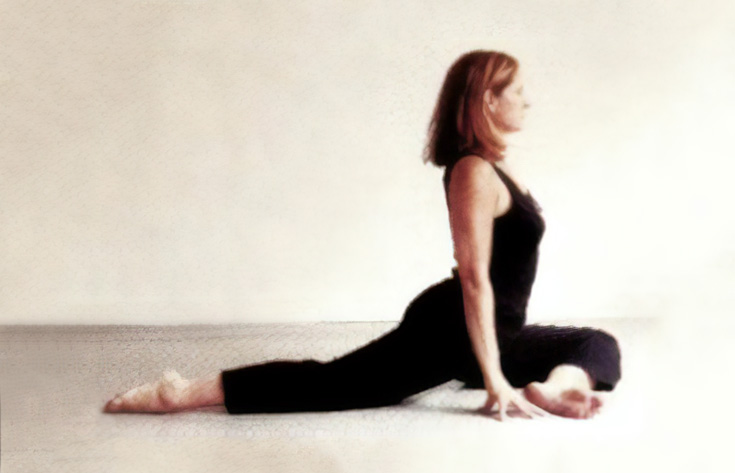 What do the following things have in common? Meditation practice, doing taxes, getting up in the morning, going to bed, making the bed, exercising, admitting I’m wrong, understanding my computer, working more, working less.

Resistance manifests in many ways. One friend told me she was very inspired to begin a workout program. She bought the clothing and cute new sneakers, drove to the gym, walked up to the door, in the door, right back out the door, and drove home. That’s an open and shut case of resistance.

But sometimes resistance is more insidious. It tricks you by making you think you really would be more productive doing something else. A regular, fairly hard-core yoga student of mine recently walked out of class about ten minutes after it had begun. I was concerned and later called to see if he was okay. He said, “Oh, yes, I’m fine. It’s just that at the very moment you asked us to begin sun salutations, I realized I really needed to do some shopping at Old Navy, and so I did.”

There seems to be a ratio between the what’s-good-for-you quotient and the level of resistance. It might seem that discipline is the only answer, but according to renowned yoga teacher Judith Lasater, exercising “discipline” can actually create resistance. Discipline is an external notion we try to impose on ourselves, and the chafing that results is resistance.

Lasater uses the example of brushing your teeth to demonstrate the difference between discipline and commitment. You would certainly never skip brushing your teeth for a day-it’s simply an unquestioned commitment. She says that once you make a commitment you stop having that internal dialogue-the angel on one shoulder saying, “Do it, you’ll feel so good about yourself” and the devil on the other saying, “It’s okay to skip your practice just this once”-and you begin to ride the rhythms of your commitment.

The system of ethics and disciplines found within Patanjali’s yoga sutras includes tapas, which means fire and refers to the passionate commitment to practice. But even this can be something that creates rigidity both in the approach to practice and the practice itself. Yogis can not only lose the freshness and wakefulness of each moment on the mat, but their bodies can get hard, their muscles tight, and their expressions harsh. Tapas transforms into the burden of spiritual arrogance.

How can we learn to recognize our own forms of resistance and use them to wake up? Yoga asanas can help us. I recently gave a friend a short program similar to the one below. We discovered that his hips, inner thighs, hamstring and entire back were very tight. He said, “I don’t like this and don’t want to do it anymore.” I reassured him that this tightness was common, especially for men, and that if he approached the poses with gentleness and deep breathing, his body would open up over time. So he gave it another try.

Interestingly, when his good friend was given the same poses, he had the opposite response. No matter how I tried to get him to stop straining and pulling on his body, he refused to relax the tug-of-war with himself. Working this way eventually led to a weight-lifting injury, and his recovery period was so lengthy that he had a choice: to cultivate patience or become angry and frustrated. Now he approaches his body in an intelligent, balanced manner.

Rather than ignoring or avoiding resistance, we can simply notice that it is there. With curiosity we can then explore the taste, texture and quality of the resistance. Instead of letting it be a solid boundary that always evokes the same response, we can contact the resistance directly when it comes up. At that very moment, we can enter it and then do whatever activity has generated the whole process-washing the dishes, jogging, or doing our practice.

The following sequence of poses will provide a deep opening in the shoulders, hips and lower back. Because these areas are so active, they can become tense. The solution is to create activity specifically designed to free those areas, eventually leading to healthy and highly functional joints. Because you might already feel blocked and fatigued in those areas, you may not feel like doing these exercises. That’s resistance. Do it anyway. 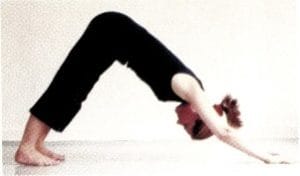 1. Downward Dog This pose will open your shoulders, the back of your legs and your lower back. Press your weight toward your legs by creating resistance to the floor with your hands and arms. Stay in this pose, breathing deeply, for 3 minutes. If that’s too long, stay for as long as you can manage, then stay for 2 more breaths, and go to the next pose. 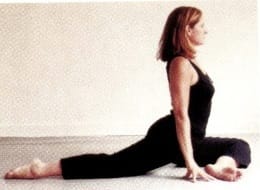 2. Pigeon (8-10 breaths) From downward dog, bring your left knee into your chest, point it toward the left, shift your weight forward and come into this position. If your left hip is not touching the ground, place a cushion under it so you can have a sense of being grounded here. The right leg should be pointing straight back and both hips and nipples pointing forward. With your hands by your hips, reach down into the earth with your fingertips as you lift up through your spine and the crown of your head. If you like, you can walk your hands forward and fold over your front leg. 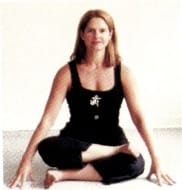 3. Ankle to Knee (8-10 breaths) Swing your right leg around and place the right ankle on the left knee with the left ankle directly below the right knee. Be precise. This pose is intense for everybody, and it took me years to be able to do it. It taught me patience. If your top knee is way up high, place a pillow under that thigh to support it. You can also try straightening the bottom leg. If it is impossible to sit up tall, sit on a cushion. You can walk your hands forward, eventually folding all the way over your legs.

4. Cow’s Head (8-10 breaths) I don’t think this looks like a cow’s head, but that’s what it’s called. Place your right knee directly on top of your left knee and pretending that your calves are the cow’s ears, make them be the same distance away from your body. Take your arms behind your back, right arm under, left arm up and try to interlace your fingers. It is quite likely that you will not be able to reach, so hold on to a belt or towel instead. Gently release your arms and do a few shoulder circles. 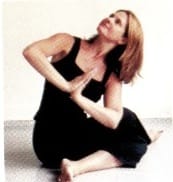 5. Twist (5-8 breaths) Try to keep length in your spine as you twist. Press the top palm down and try to bring your prayer hands to the center of your chest. You can’t breathe into your lower belly here, so feel the fullness of your breath in your ribs and lungs. 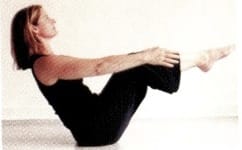 6. Boat (3-5 breaths) I don’t think this looks like a boat either, but so be it. This is a great abdominal and lower back strengthener. If this is easy for you, try it with your legs straight. Keep your chest lifted.

Now do the whole routine with the other side. Don’t try to stretch or improve. Set yourself up in the correct alignment, breathe deeply and watch your mind and body change. It’s only ego that makes you stretch it.

Founder of the world-renowned OM yoga Center in NYC (1998-2012), Cyndi is known for her contemplative classes and soulful teachings. She is the author of 5 books, including Yoga Body, Buddha Mind: A Complete Manual for Physical and Spiritual Well-Being and the New York Times critically acclaimed May I Be Happy: A Memoir of Love, Yoga, and Changing My Mind. In 2019 she launched a new online course, "Taking Refuge In Your Body," available from learn.lionsroar.com.