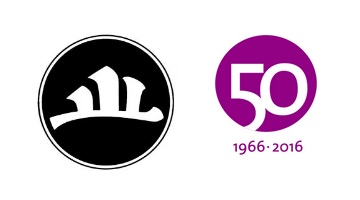 If the Rochester Zen Center logo (left) ​is familiar, that might be due to Roshi Philip Kapleau's use of it on the cover of his famed book The Three Pillars of Zen. The emblem, called a kao, was employed in the book “not for meaning, but abstractly, for [its] decorative quality,” as an interior note explains.

This past weekend found the members and friends of Rochester Zen Center in Rochester, New York, celebrating the venerated institution’s 50th year. The RZC zendo was open all weekend for informal sitting and devotions, and a special memorial altar dedicated to deceased sangha members was installed as well.

Rochester Zen Center was first established in 1966 by Philip Kapleau — roshi and author of the classic 1965 book, The Three Pillars of Zen: Teaching, Practice, and Enlightenment. Though billed by Kapleau himself as a presentation of “both the Soto and Rinzai disciplines [of Zen],” the book is perhaps most notable for giving readers a sense of the “private interview” process undertaken by Zen students with their teachers, and how koans, most strongly identified with Rinzai, might play a part in that process. Today, Kapleau’s dharma successor Bodhin Kjolhede, ordained by Kapleau in 1976, serves as abbot. [Read a Buddhadharma forum in which Kjolhede, along with Ross Bolleter, Joan Sutherland, and Judy Roitman discuss how to work with Zen koans, here.]

On October 15, RZC will host Jon Kabat-Zinn, Executive Director of the Center for Mindfulness in Medicine, Health Care, and Society at the University of Massachusetts Medical School, as he presents the “50th anniversary lecture.” Titled “The Mainstreaming of Mindfulness in America: What Zen’s Got to Do With It, and Where Does It Go From Here?”, the lecture will be about “the origins of mindfulness-based stress reduction (MBSR), including [Kabat-Zinn’s] own early experience with Phillip Kapleau and The Three Pillars of Zen in addition to other Mahayana and Theravada traditions that contributed to its development He will also explore the ethical and moral challenges associated with the MBSR phenomenon, as well as the potential promise, pitfalls, and controversies surrounding its growing popularity.”

The Frontier Zen of Philip Kapleau and Rochester Zen Center