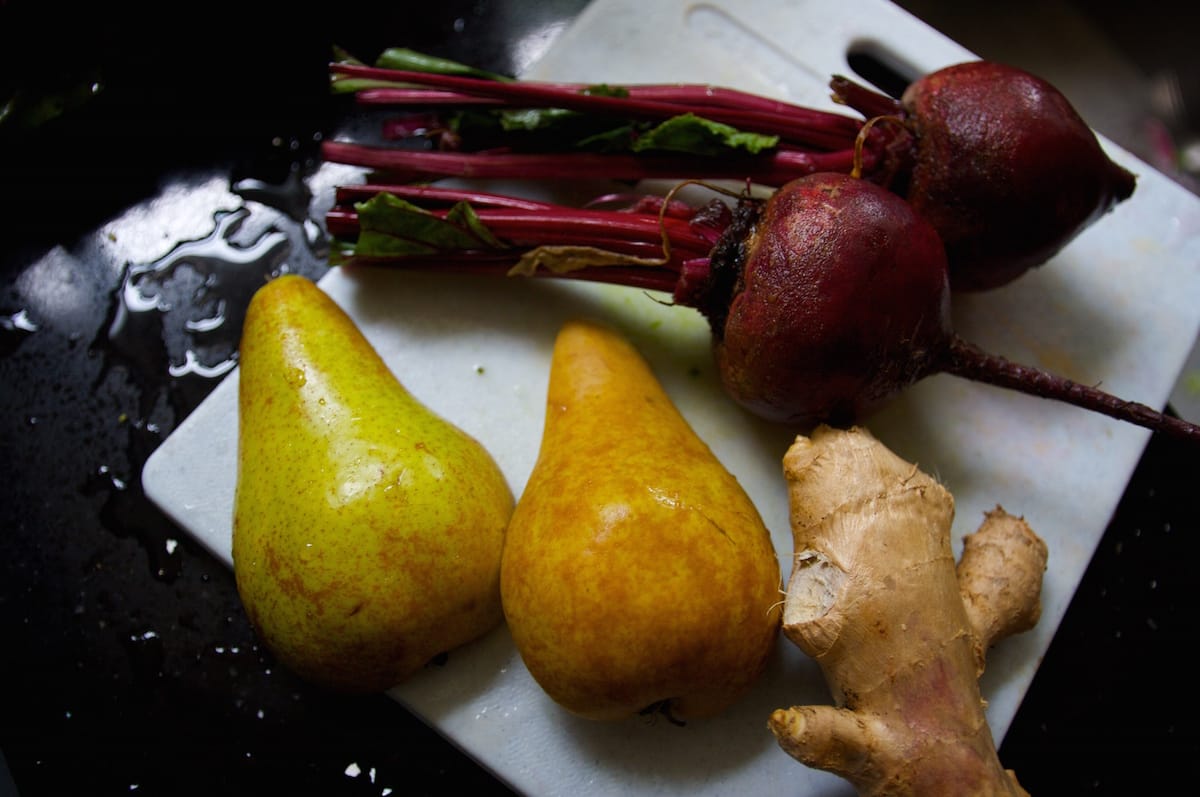 Food is precious. We don’t always remember that until there’s not much left. Then it’s obvious. Food is an everyday matter, until it disappears. Then we know it’s terribly important, and the simplest dishes can be divine. That they’re there at all seems providential.

One winter at Tassajara Zen Center we found this out. We hadn’t stocked up as well as we might have, so when the rains came we were ill-prepared. And the rains did indeed come: torrentially. Tassajara Creek, which is placid in the summertime, swelled so that it roared through the canyon.

Such events are all rather fun and exciting as long as one is dry and has enough to eat. When one starts going hungry, then the omnipresent, pulsating, throbbing surge of water is no longer thrilling, but takes on ominous qualities. What were we up against? News came back that the fourteen mile dirt road to town was no longer passable. Not that we were accustomed to going out to the movies anyway, but we did depend on the road for food supplies.

We became foragers. Four people went out each day to pick miner’s lettuce and curly dock, which were plentiful with all that precipitation. At lunch after the wheat flour for bread was gone, I began to serve white rice watered down to make a kind of gruel or congee. With it we would have “stone” soup, made with perhaps a few beans or yams, and a miner’s lettuce salad. Dinner would be brown rice with some steamed curly dock.

We did have a large sack of whole wheat berries left over from our failed efforts to grind our own flour, so I began cooking them and adding them to the rice gruel at lunch. That winter the food staples were stored in a room which overlooked the creek, and sometimes I would look from one to the other: a few meager bags and tins of food staples, a magnificent surging of water. “These few bags,” I would think, “is all there is. We could actually run out of food.” Would we have to abandon Tassajara and hike out?

Days went by. We began adding lavender lupine blossoms to our miner’s lettuce salad. We may have had some alfalfa seeds which we sprouted and added as well. It was a simple life, and we ate simply, and I suspect, most of us lost weight. I know I did. Now weighing a round 160 pounds, I was skinny then at 132 pounds, but I got down to 125.

When the road remained impassable, we arranged for a helicopter to deliver food to Church Creek Ranch, about a three-hour hike away. We trekked over the eight miles and then back, our packs laden with groceries, some of which we wouldn’t have ordered, but ate anyway: Jiffy peanut butter, Mary Ellen jam, Wonderbread. We had these fantastic giant gems called oranges. We had cauliflower and broccoli, cheese and nuts, onions and garlic—we feasted.

Not so long after that the road crew came in and cleared the road, dynamiting the giant boulder which had blocked the way. We’d survived an unusual winter.

Later that spring the toilet in the dormitory backed up, and Reb our plumber (who is now one of our abbots) was asked to investigate. Opening up the drain line, he discovered that it was blocked with undigested intact whole wheat berries. Live and learn. How clever of the ancients to grind the wheat and make it into bread and pasta. How less than clever of the modern man to use it to clog plumbing.

We ate simply. We may have lost weight, but we got by. Looking back now it is striking that I can’t remember any complaints. Complaints come with affluence, when there are choices to be made, and the cook is making different choices than you would, when you are rich enough to pick and choose. Complaints come with comparisons, when some group of people has more or better than you do. When everybody is in it together, we weather it together. The fact that there is food is enough. No complaints.

That was then. This winter I’ve been working on a new generation of baked vegetables: simple, intensely flavored combinations of root vegetables with dried fruits. These are the kind of dishes that don’t sound appealing—the same old stuff, you know—but which turn out to be sweet and appetizing in the eating.

Turnip with Pear and “Fire-Roasted” Walnuts

Cover the dried pears with water in a saucepan and start them cooking. Roast the walnuts in a skillet over moderate heat, stirring enough that they don’t burn. When roasted and fragrant, sprinkle on the sugar and salt. Stir with a metal spatula or heat-resistent scraper until the sugar melts and coats the walnuts here and there. Remove to a bowl and set aside.

Wash the turnips and rutabaga and cut off any extraneous rootlets and bruises. (If they’re large, you may want to peel them as the skin can be tough.) I cut the turnip into wedges like a tomato. The rutabaga I cut in halves or quarters lengthwise, then into slices. Cut the pears into quarters, core, then cut into large chunks.

By now the dried pears should be cooked enough to be cut up. Drain, reserving the liquid, and cut the pears into fork-size chunks. If you have the equipment handy, blend some of the dried pears with the liquid to make a puree.

Place the dried pears, liquid, turnips, and rutabaga into a casserole, sprinkle with salt and pepper, and bake covered in a 375 degree oven for about 50 minutes, until the turnips are starting to get tender. Sprinkle the walnuts on top before serving.

This turns out to be “alchemical,” which is to say that the flavors unite and blend in a surprising way. Dried cranberries (which are somewhat sweetened) are more widely available now. I prefer to bake the beets, which gives them an earthier, nuttier flavor, but if you want to save time cook them on top of the stove. Here’s my method.

If using sundried tomatoes which are not packed in oil, they need to be reconstituted. Place them in a saucepan and cover with water. Cook several minutes. Add the cranberries for half a minute at the end. Drain and reserve the liquid. Slice the sundried tomatoes into narrow strips.

Cut the stems off an inch above the beets. Place the beets in a baking dish with the water from the sundried tomatoes (or add enough water to cover the bottom of the pan a quarter inch). Cover the pan and bake in a 375-400 degree oven for an hour or more until they are fork-tender.

Remove from pan and allow to cool enough so that you can remove the skin, root, and stems, which slip off by hand. Then cut up the beets and put them back in the baking dish with the tomatoes, cranberries, orange peel, and a touch of salt. Reheat in the oven before serving.

Rinse any excess dirt off of the celery root, and then trim off the skin and rootlets all the way around. Cut into quarters and then crosswise into slices.

Peel the garlic cloves and slice into halves or quarters. Oil a baking dish or pan with olive oil, and put in the sweet anise, minced fennel, celery root, garlic, thyme, some salt, and pepper.

Cover and bake in a 375 degree oven for an hour or more until the vegetables are very tender. Amazing.