With all that talk about “balance”, it’s tempting to make tenuous connections between the practice of Zen and the practice of paddling out, standing up, and riding a wave. 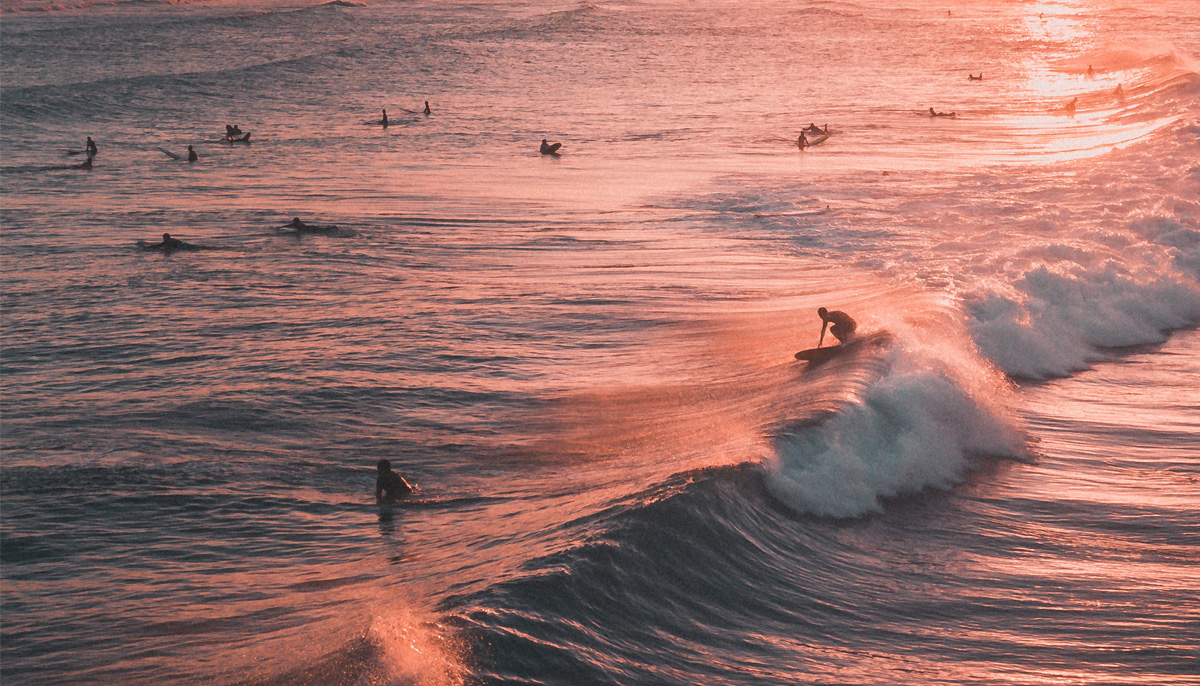 Photo by Jess Loiterton from Pexels

There are real connections between the two—but it helps to be a surfer and a Zen-head if you want to know what you’re talking about. Author Jaimal Yogis is both, as his book Saltwater Buddha: A Surfer’s Quest to Find Zen on the Sea makes plain. (Update: the book is being made into a film. Click here for details and to see the trailer.)

Here’s an excerpt; drop in and enjoy.

I usually liked to think of the sea as a nurturing mother, a giver of life. But as we rounded the lava rocks that divided Second and Third Bay, as the swell transformed from manageable turquoise into blue open-water surges that exploded against the rock, I began to resonate with how Hawaiian legends described Kanaloa, the sea’s ruler: a sea monster-god of death and darkness, the king of the underworld.

It was my first venture into Third Bay, a treacherous break even most of the local Hawaiians avoided. And I trembled as I paddled.

One of my favorite verses, a song by the spirit Ariel in Shakespeare’s The Tempest, popped into my head. It’s one I’ve always thought illustrates the beautiful notion that, because everything is interconnected, death may be more like trading in your old rusty parts than a definitive end. Given the circumstances, however, the words failed to comfort:

Full fathom five thy father lies;
Of his bones are coral made;
Those are pearls that were his eyes;
Nothing of him that doth fade
But doth suffer a sea-change
Into something rich and strange.

As we paddled deeper, monsters from my childhood storybooks—the ones I stared at obsessively for hours on end—began to flash: rhino-like turtles as big as islands, giant squid with tentacles the size of redwoods, krakens, and leviathans. I heard them all warning me: “We will kill you. Go back.”

“It’s a little shifty,” said Rom, the advanced Australian surfer who had become a sort of surf guru to me in Hawaii. He meant that the waves were breaking in different places and that we were going to have a hard time knowing where to situate without getting caught inside. “It’ll be tough to line up.”

While still well outside of the break point, a swell finally came through that foreshadowed things to come. The surge filled in under my board and it felt as if a great blue whale had breasted right below, lifted me high out of the water, and plunged back down.

No one else was surfing Third Bay, and because it can be difficult to feel when the current is tugging you along, we had to find markers on land to gauge our drift. Eventually, the consensus was that we could line up with a bent palm tree on shore and a rock outcropping to the south. Rom looked at me and grinned widely.
“Man,” he said, “I’ve gotta try this.”

At a Zen monastery I’d lived at a few years earlier (I’d wanted to be a monk before deciding, more definitively, on the life of a surf bum) we often chanted the name of Guanyin bodhisattva, or Avalokiteshvara, the bodhisattva of compassion. Reciting Guanyin’s name in any language, many Buddhists believe, will keep you safe from harm.

Ever the skeptic, I always tried to use the Chinese chant—”Namo Guan Shr Yin Pu Sa“—as a mantra alone, a concentration tool. Praying for outside intervention seemed cultish, overly religious.

But as the saying goes, there are no atheists in a foxhole. And as Rom paddled into the takeoff zone, I cried to Guanyin for help.

Rom missed the first wave-and I was glad. It growled, spitting a puff of mist out of its shadowy maw. But Rom didn’t back off. He didn’t hesitate. He caught the third wave of the set. And from my vantage point, behind the wave, Rom disappeared as he dropped.

The wave’s lip smacked loudly against the water.

Four seconds. Five. Six. Rom had been devoured. Seven. My guru was dead.

Then, off the back of the wave, Rom launched himself ten feet into the air and kicked his board out before diving into the water, coming up grinning.

“Now that is an awesome wave!”

All my reasoning faculties, plus the sea monsters, were telling me to paddle back. But reason has never been my strong suit. And I guess I wanted to believe the sea monsters were just illusions, like Mara’s army, that I had to see through.

It was beyond my ability level. But I believed I could do it-kind of. Did I believe I could do it? Rom saw me hedging. “Ah, just go for it,” he laughed. “I reckon it’s the best ride this park has. Something to tell your friends back home about.”

I don’t know if vanity or bravery motivated me. But I nodded, swallowed the lump in my throat, and paddled in. I scooped clear saltwater in my hands and tried to see that it was all basically the same stuff, it was all the sea: tears, sweat, blood, crushing saltwater behemoths. No pressure, just me and the waves.

And maybe death wouldn’t be so bad: A sea-change. Into something rich and strange.

I was supposed to paddle for the wave, but instead I paddled over the top, barely cresting the lip as it feathered. I would have passed on the next one, too, but Rom was shouting, “This one’s yours!”

I turned my board, pointed it toward the rocks and began pumping my hands through the water. The thing began to lift, kept lifting. Up, up, up. I was looking down the line of a horizontal tornado and my board picked up speed. I didn’t hesitate. My body somehow knew. I felt the split-second moment to pop, did so, and pointed right.

Then… speed. Unbelievable speed. Not walking on water. Running. Gliding. Flying. No separate self. No Jaimal riding. No thought. Just the sound of thunder behind me. Just a blue wall transforming. Just—… I saw the rocks coming.

I pulled out. Safe.

“This is it, man!” Rom was shouting. “We have it all to ourselves.” He started whooping and hooting like six-year-old. I sat there shaking, smiling. It seemed like my skin would start cracking from the buzz inside. And then it busted out of me. “Whoooooo!” I screamed. “OH MY GOD!”
During the next month, we surfed Third Bay a few more times on relatively small days like that. And each time we surfed, I saw that the idea of Third Bay was more scary than the actual wave itself.

One day when Rom was working, I even went alone. From the parking lot, I could make out a silhouette of a single bobbing surfer against the horizon. The sun would be setting in an hour and a half and it didn’t make much sense to brave the twenty-minute paddle. But I guess I wanted to show myself that I didn’t need Rom to come with me to Third Bay every time.

When I arrived, I saw the single surfer: a middle-aged man with bright green eyes and a deep scar across his forehead. His leathered skin and beat-up big-wave board made him look like he’d been drifting on ocean currents for twenty years.

I nodded, and he gave a wide grin revealing a few missing teeth.

“Small today,” he said, “mostly just a drop.” He pointed to the horizon. “But it’ll change. You see ’em out there?”

I didn’t see anything but big white clouds.

“Dra-gons. Been watching ’em. Sort of a hobby.”

Had we been sitting at any other of Pohoiki’s breaks, I would have welcomed the man’s visions. But on my first day at Third Bay without Rom, surfing with a guy having acid flashbacks was not my idea of fun. I considered paddling back, but I was tired. I decided to catch my breath for a few minutes.

“They’re in the clouds—Lono,” the man said, referencing the Hawaiian god who rules over storms. “Lot of messages in the clouds.”

The clouds did seem unusually huge and the outer edges of the billows formed clean hard lines. It was easy to see any number of mythological creatures writhing inside: dancing, fighting, mating.

At that point, a set came through with the usual ferocity. I thought the old man was too late, too deep, but at the zenith, he stood gracefully, pulling a smooth bottom turn then gliding off the back.

I still felt uneasy around the guy and I watched my mind start to make up stories-what jokes I would tell Rom the next day. But I stopped.  I remembered how fun it was to make shapes out of clouds when I was little… and that reminded me of a Zen teaching that real insight comes from letting go of assumptions that the world is a certain way. Rather than constantly spinning out a web of assumptions, Zen teaches to be with what actually is, moment to moment.

So I tried to let my judgments dissolve. For the rest of the evening, as the leathered man and I exchanged waves, I tried to be a five-year-old in my mother’s garden with a fairy-catching net. And maybe it was the lighting, or the power of suggestion, or the adrenaline that Third Bay catalyzed. But for brief moments that evening, it almost seemed like each thing around me-not just the clouds, but the stones, the trees, the wind-was a living organism.

“You have to ask permission when you come in here,” the man said, paddling back toward me. “Some people don’t. They get washed up on the rocks.”

Bobbing on the fingertips of Kanaloa, his words carried some gravitas. I asked permission.

Saltwater Buddha is available now from Wisdom Publications. For more information about the author, visit his website at JaimalYogis.com.