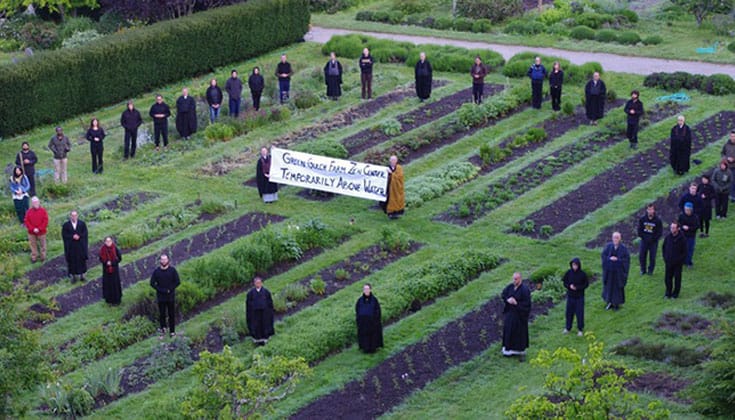 Members of the San Francisco Zen Center (SFZC) community, from both Green Gulch and City Center, will join together to march with the People’s Climate Mobilization on April 29.

SFZC’s Central Abbess Linda Ruth Cutts will attend the main march in Washington, D.C., while the rest of the sangha travels together to a sister march at Lake Merritt, the details of which can be found on their Eventbrite page.

SFZC is joining the march to enact their “interdependence with the great earth and all beings,” as a form of “march-practice,” which is further explained by the SFZC below:

Our intention is to march as an expression of our practice: to be grounded, compassionate, nonviolent, together, and in full expression of our Bodhisattva vow. Our practices as we prepare, travel, demonstrate, and debrief will include zazen, kinhin, chanting, and making offerings of food or water to sentient beings.

San Francisco Zen Center has long celebrated and strived to enact our interdepedence with the natural world, based on our commitment to the Buddha’s teachings on ethics and interdependence. It is especially urgent that we uphold, express, and enact this principle now.

A full listing of sister marches around the world can be found on the People’s Climate March website.