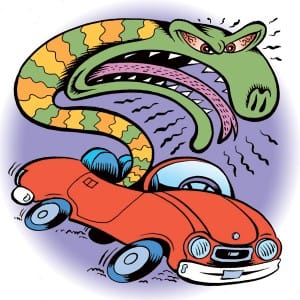 “Driving Snake,” by Peter Bagge. From “The Animals Inside You,” by Carolyn Rose Gimian, in the January 2015 issue.

Those of you who read comics as well as Lion’s Roar — we know you’re out there — may well have recognized the work of one of the medium’s luminaries in our pages lately: Peter Bagge. Bagge illustrated Brad Warner’s article, “A Punk Looks at Fifty“–and his work will also appear in our forthcoming January issue alongside Carolyn Rose Gimian’s article, “The Animals Inside You” (see the illustration at right). …And now we’ve got a Bagge threepeat, being that his work will illustrate a feature by Ira Sukrungruang in another 2015 issue of our magazine, as well.

Says our associate art director Andrew Glencross: “I’ve been a huge fan of Peter Bagge’s work since the mid-’90s, when my girlfriend introduced me to her extensive Hate comic collection. Those clean, bold lines! Those grotesque expressions! Those rubbery limbs! I never dreamed that twenty years on I’d get a chance to work with Peter, nor that he’d be such a dream to work with. I really do have the best job.”

Bagge has now been named a 2014 United States Artist Fellow in Literature. The fellowship recognizes America’s most accomplished, innovative artists and comes with a $50,000 award. For more, see Bagge’s congratulations at Drawn & Quarterly and the official announcement at the United States Artists Fellows website.