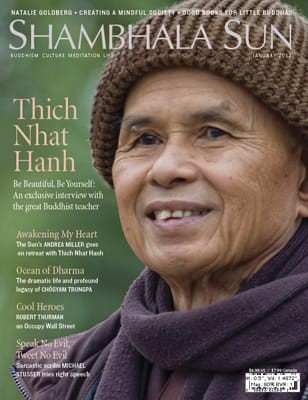 • Peace in Every Step: Thich Nhat Hanh’s Life of Courage and Compassion

Thich Nhat Hanh on true love, the benefits of suffering, and the insight that will set you free. An exclusive feature interview with Shambhala Sun editor-in-chief Melvin McLeod.

• The Moment is Perfect

Thich Nhat Hanh teaches us that there is nothing we experience that can’t be approached with mindfulness and compassion.

In this introduction to the book Love’s Garden, Thich Nhat Hanh shows us how we can use loving relationships to cultivate the seeds of buddhahood inside us.

• The World We Have

Only once we combine our concern for the planet with spiritual practice, says Thich Nhat Hanh, we have the tools needed to transform.

Filmmaker Velcrow Ripper reports on Thich Nhat Hanh’s historic trip home to Vietnam, where tens of thousands gathered with him to revive Buddhist practice and to heal the wounds of war.

Thich Nhat Hanh offers a guided meditation to relax our body and mind and return to the here and now. Fully present, fully alive, we find we are already home.

• This is the Buddha’s Love

The great Buddhist teacher Thich Nhat Hanh talks about non-self, interdependence, and the love that expands until it has no limit.

• Resting in the River

A teaching by Thich Nhat Hanh on allowing ourselves to rest like a stone thrown into a river. Resting on the bottom of the river, it allows the water to pass by.

• In Engaged Buddhism, Peace Begins with You

Thich Nhat Hanh, who originated Engaged Buddhism, in an interview with John Malkin.

• There is No Path to Peace, The Path is Peace

Thich Nhat Hanh says that only deep listening and gentle communication can remove the wrong perceptions that are the foundation of violence.

bell hooks meets with Thich Nhat Hanh to ask: How do we build a community of love?

In the Face of Fear: Buddhist Wisdom for Challenging Times

To order a trial subscription to Shambhala Sun, click here.