On September 13th, Buddhist nun, teacher, and author Pema Chödrön had the opportunity to meet President Barack Obama. There were, as you can see, smiles all around. Below, Glenna Olmsted, Executive Assistant to Pema, tells us about the meeting and how it came to be. 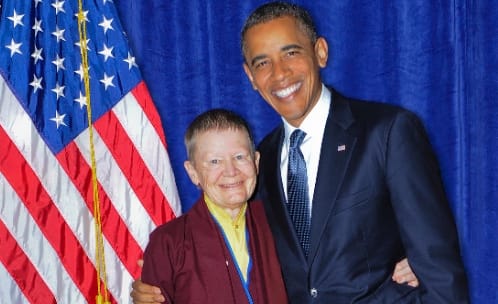 It all seemed so surreal to get the call that Ani Pema might get an audience with Barack Obama. Our colleague Pamela Krasney had been trying to make it happen for months — Pema had told Pamela that she had wished for a while now to meet the president. So for the second time in recent weeks, we set it all up to get her to Denver, not knowing if it would really happen this time. But Pema was ready and willing no matter what.

On the morning of the meeting, we headed to Golden, Colorado, being guided by “the girl in the box” — as I like to call my GPS. She was relentless in getting us there, interrupting Tsoknyi Rinpoche’s teaching on the nature of mind (which came on from my playlist at random as we started our journey). Auspicious, and we got a great chuckle over it all to boot!

Finally we met up with our host, Bob Morehouse, at a nearby restaurant so that we could get a place to park, close enough to walk to Pema’s checkpoint. All went without a glitch as we checked her in and made our plans to meet up after the rally. We waited until they whisked her away to a security area where she would wait for the President with thirty other lucky folks.

The line to get in to the rally was about five blocks long. Unbeknownst to me, mine was a “VIP” ticket, so I was herded in through the maze and ended up right in front of the President’s podium. After his speech, I got to shake his hand! Wow!

Before he came out to speak, Ani Pema was anxiously awaiting his arrival. When he showed up, he was introduced to each person one by one. When it was Pema’s turn and she told him that she was a Buddhist nun, he asked her how long she had been a Buddhist. The thing that most impressed Pema was that he was so present with each person, genuinely asking and kindly listening, and playfully interacting with the children who were there.

Pema was so charmed with him that she couldn’t remember the rest of their conversation. He gave her a hug and they had their picture taken together. Then she and her newfound friends there were ushered to another VIP section to watch his speech.

Needless to say, it was something we will never forget!