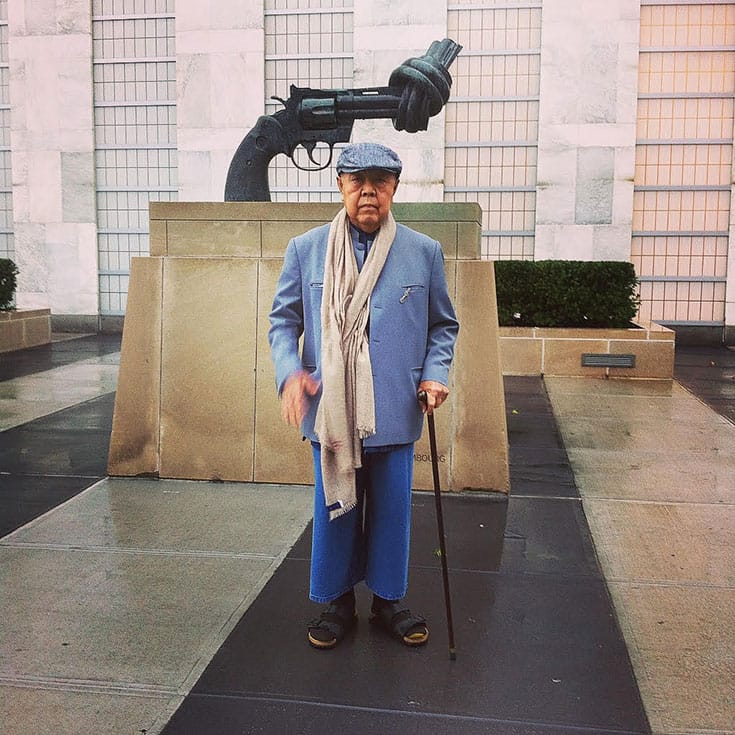 The outspoken socially engaged Buddhist, Sulak Sivaraksa, brought a message stressing individual responsibility, and a harsh critique of the worldwide capitalist system, to the United Nations on Wednesday during the annual week of meetings in New York City.

Sulak, along with Therese Mema Mapenzi from the Democratic Republic of Congo and Dr. Rahmawati Husein from Indonesian, were invited to speak on “Uniting Around the Principle of Humanity,” an event organized jointly at the U.N. by the International Committee of the Red Cross (ICRC) and the government of Kuwait.

Participants and attendees at the meeting included the Foreign Ministers from Switzerland and Kuwait, and over thirty different countries’ envoys, U.N. agency heads, and ICRC and World Bank representatives. The objective of the high-level gathering was to raise awareness of the common commitment to humanity that exists across all cultures and to reinforce the principles of humanity as the fundamental goal of humanitarian action.

The meeting began with various government and U.N. representatives stating lofty goals and sweeping statements about the common good. Sulak immediately tried to steer away from the abstract and toward a discussion of personal responsibility, suggesting that greed, violence, and ignorance in society is inter-related to one’s own personal suffering.

“I believe that personal greed manifests in society as the insatiable desire for accumulation—in other words, capitalism, consumerism, and natural resources extraction that ignores the limits of the environment,” Sulak said.

“Seeds of hatred within us manifest in the world as militarism. And my harshest critique is reserved for those who peddle delusion—advertisers and the mainstream media—which promote useless and unhealthy produces and unwholesome ideas which lead people away form a meaningful life of contentedness and a common humanity, and instead towards poverty and a sense of separation.”

After the Kuwait Foreign Minster and a World Bank official spoke about, “the dignity and worth of the human person” as a central concern for world politics, other government officials spoke of the failure of the current systems to prevent or stop large scale war and violence, as witnessed in Syria and the plight of refugees, and the viciousness of the so-called Islamic State.

Ms. Mapenzi, who works with war trauma including child rape victims and child soldiers, commented, “How can there be so much suffering and inhumanity in the world? Only because there are some people in the world who become very rich, who profit from conflict.”

“I am only 33 years old, and I have four children. But in my life I have never seen peace. All the while I see so many religious people and humanitarian interventions around me. But where is peace? Where is real religion?”

Ms. Mapenzi suggested less time and money should be spent on organizing meetings and redirected to action on the ground. “To create laws, regulations, rules and principles is good.  To organize summits, conference, and debates is very fine. But what is better is to tackle the real causes of these conflicts on the ground.”

The U.N. meeting this morning demonstrated the frustration that is felt by those within the U.N. at the lack of progress in preventing suffering in its most violent manifestations. At the same time, Sulak, Ms. Mapenzi, and other representatives of civil society articulated an equally frustrated view from the grassroots level at how the global system is failing.

Sulak commented, “I was born more than 80 years ago and raised in traditional Siamese culture. I have seen in my lifetime how capitalism, mass media, and the global marketplace have replaced traditional morals and ethics. I disagree that the world today is at the highest mark of human development, because this often unspoken sentiment prevents the peoples of the world from pursuing other aspirations and from thinking about alternative ways to improve or maintain their livelihood and traditions.”

Despite the odds, Sulak stressed that we must not lose the drive to work on one’s spiritual development at the same time as striving to alleviate suffering of others.

“If we are serious about getting rid of greed, anger and ignorance in ourselves, we must inquire how we actively or passively take part in perpetuating the three poisons in society. Once we see the interconnections, we can work simultaneously on our own spiritual development and to dismantle the structural violence in society.”

“How should this be done?” Sulak was asked.

“We cannot rely only on intellectual input! We should learn how to breath properly,” Sulak said, in what was likely one of the only times at the U.N. this week that meditation instruction was suggested.

“This is how to transform yourself from within. Synchronize your head and your heart holistically. Then you can solve humanitarian problems.”

“Profound,” the U.N. Under Secretary replied before closing the meeting. “Very profound.”

Matteo Pistono is the author of Meditation: Coming to Know Your Mind and In the Shadow of the Buddha. More of his work can be found at www.matteopistono.com.