Sojun Mel Weitsman, founder and abbot of Berkeley Zen Center, passed away on Thursday, January 7. He was 91. 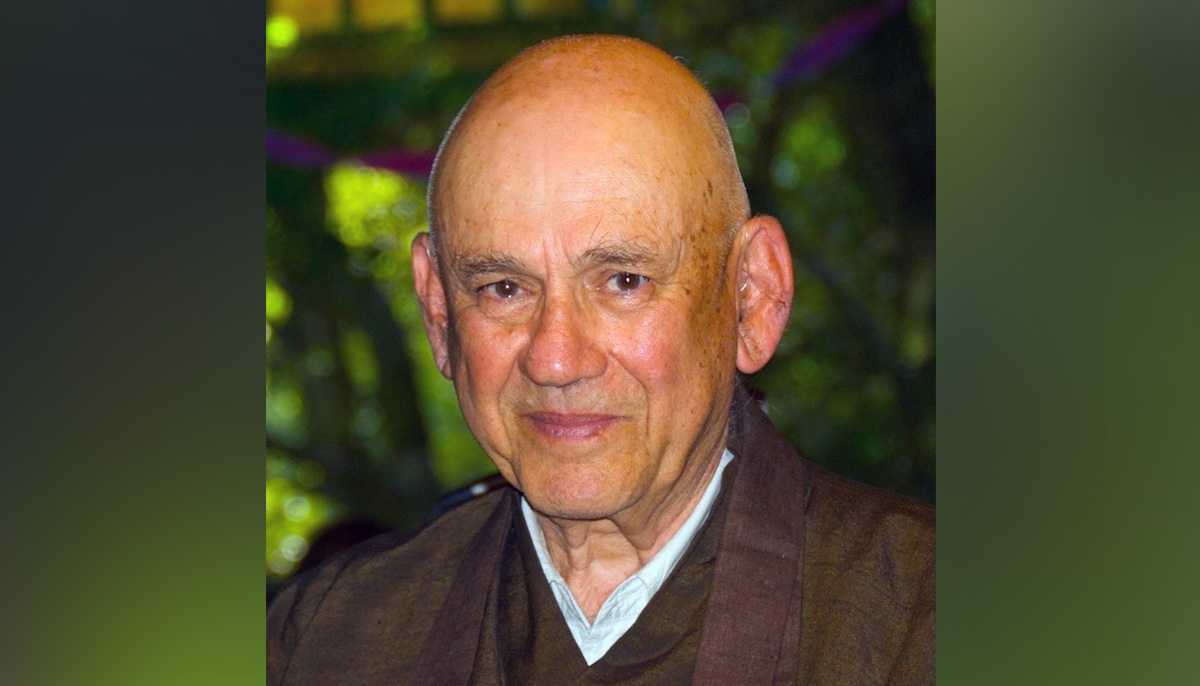 Renowned Soto Zen Buddhist priest and teacher Sojun Mel Weitsman passed away at home on Thursday, January 7 at the age of 91. Weitsman was the founder and abbot of Berkeley Zen Center (BZC), and formerly served as the co-abbot of San Francisco Zen Center (SFZC).

Hozan Alan Senauke, Acting Head Priest at BZC, shared an obituary and remembrance of Weitsman with Lion’s Roar, which reads:

With great sadness the sangha of Berkeley Zen Center announces that Hakuryu Sojun—White Dragon/Essence of Purity—Mel Weitsman peacefully passed from this world to the Pure Land of Buddhas and Ancestors at home on Thursday, January 7, 2021. He was 91 years old.

Sojun Roshi’s clear and steady leadership made BZC a beacon for Buddhist practitioners and other spiritual seekers in the East Bay and more widely in the U.S. With a strong circle of dedicated Zen students, as guiding teacher and abbot at BZC for fifty-three years, Sojun created a place where rigorous daily sitting practice was integral with people’s life of family, work, and service. He often spoke of BZC as a kind of “one room schoolhouse,” where each person could find the necessary teachings for their position in life. Anyone could knock on Sojun’s office door and he would readily invite them in.

Born in Los Angeles in 1929, Sojun Roshi’s broad life experience included a stint in the Marines, years of art study and abstract expressionist painting, augmented by work as a house and boat painter, cab driver, and teacher. When he met Suzuki Roshi his life work was transformed.  He embraced the practice of zazen and the task of sustaining the dharma of zen, given to him by his teacher Shunryu Suzuki Roshi.

At the instruction of Suzuki Roshi, Sojun founded Berkeley Zen Center in 1967. He was ordained a year later in the attic zendo he had established on Dwight Way in Berkeley. Suzuki Roshi died in 1971.  In 1984, Sojun received dharma transmission from Suzuki Roshi’s son, Hoitsu Suzuki Roshi, abbot of Rinso-In Temple in Japan, and he was installed as BZC’s first abbot in 1985. In declining health, he stepped down as abbot in October 2020, assuming the position of Founding Dharma Teacher.

From 1988 to 1997, Sojun served as co-abbot of San Francisco Center, where he had begun his Zen practice in 1964, helping to stabilize SFZC through a period of transition while still guiding Berkeley Zen Center. He continued as Senior Dharma Teacher at SFZC until his death. He was also one of the founding teachers of the Soto Zen Buddhist Association and the American Zen Teacher’s Association.

Sojun Roshi was deeply respected in the Zen community—in the U.S. and in Japan. His own warm embodiment of Suzuki Roshi’s “ordinary mind” was a path of steady and determined practice, the luminous quality of “nothing special.” Although Sojun had more than thirty transmitted dharma heirs leading Zen centers around the U.S., and more than 200 lay ordained Zen students, he was most at home in the community of Berkeley Zen Center, which continues to thrive.

Sojun Roshi is survived by his wife Elizabeth Horowitz, their son Daniel, and uncountable disciples and students across the United States and around the world. Cards and letters can be sent to Liz, Daniel, and the BZC sangha c/o Berkeley Zen Center, 1931 Russell Street, Berkeley, CA 94703.

The bulk of Sojun’s audio lectures are found at https://berkeleyzencenter.org/talks-2/.  Sojun Roshi’s forthcoming memoir and collection of lectures will be published by Counterpoint Press in 2021, as will a new collection of Suzuki Roshi lectures, edited by Sojun and Jiryu Rutschman-Byler. An additional archive is in process at the Asian Library at Stanford University.

In November 2020, we at Lion’s Roar were quite fortunate to work with Sojun Mel Weitsman. Just days before he would enter hospice, Sojun sat down to shoot video for the special online learning series celebrating the 50th anniversary of Shunryu Suzuki’s famous book, Zen Mind, Beginner’s Mind that we developed in partnership with San Francisco Zen Center. In this selection of clips from his hour-plus-long presentation, Sojun speaks personally, telling of his early days with San Francisco Zen Center and Suzuki Roshi, and his founding of the Berkeley Zen Center.

And then, when I was given Dharma transmission by his son in Japan, Hoitsu, he gave me the name Hakuryu. So, I don’t want to go into explaining what that means, but…

I came in 1964 when Zen Center was just beginning to mushroom a little bit and Katagiri Sensei — sensei means teacher — arrived a year before me. And he was a Japanese priest who was curious about Suzuki Roshi. And, he arrived in LA Los Angeles and he came to Soko-ji, to see if he could help Suzuki Roshi.

And so the two of them were like our examples of practice. Suzuki Roshi would come in through the door every morning, 5:45. His office door. There were two doors, his office door, and offer incense and sit zazen. Katagiri would do the service. He would play the instruments — the wooden fish drum, and the round keisu, which is a bell.

And they would chant. And we would chant along with them in Japanese.

So Suzuki Roshi would sit with us everyday. What impressed me about Suzuki Roshi… I had been an artist; a painter. I had studied with Clifford Still at the Art Institute in San Francisco. And I was, you know, I was in my early twenties.

And, I had a lot of learning to do about life. I was 35, though, when I went, came to Zen Center to practice and, I was looking for something. I was looking for a good spiritual practice. And when I sat down in Soko-ji temple on the zafu that first time, it felt wonderful to me.

And so at some point, not too long after that, as I would go to Zen Center to sit, to Soko-ji, I realized that this was what I was looking for and I’ve just been doing it ever since. Suzuki Roshi was always encouraging.

When he first came to Soko-ji, he gave talks — aside from teaching us zazen, he gave talks. And the talks that he gave, went into becoming Zen Mind, Beginner’s Mind.

You couldn’t tell it from… People who hadn’t met Suzuki Roshi often think really, he was just a stern Zen master, you know, blah, blah, blah — but he was just this quiet little guy. Ordinary person. It’s this ordinariness which was just so extraordinary.

But I was impressed by him. And then I never wanted to repeat anything before I started practicing. You know, I just wanted to be a free spirit. When I started the practice, I observed him. He would come out of his office every morning, as I said, and bow, offer incense, take his seat. And when zazen was over, we’d have a service and the chanting, the Heart Sutra three times in Japanese, bowing.

And then we would pass through his office and he would bow to each one of us as we left. And, then he would repeat that every afternoon for every morning and every afternoon he did that. And he seemed content to do that. It was more than content. It was like fulfillment. I always felt that he felt fulfilled by that simple, mantra of activity, his activity of coming out of his office in the morning.

Doing the zazen and the service, coming back, bowing to his students. And, day after day.

So, we had done what we called the First Sesshin at Tassajara. Sesshin is a week-long zazen retreat and it was really hot there in the middle of the summer, over a hundred. And I couldn’t sit there, I’d only been practicing for about three years. And, they were really hard, but he called me in afterwards to come in to his cabin and said, I would like to ordain you.

So that’s how I became ordained. And, ’69, he said, I’d like you to join our order. And I said, well, do you think I’m … when you’re going to do that? And he said, Oh, when you’re ready, when I’m ready. So it took a couple of years for him to ordain me. And after Suzuki Roshi died, there was a question of who should be… Well, he named Richard Baker as his successor. But, um, should we court the Japanese Soto-shu? And we decided that we wouldn’t, and that we would go our own way, given what Suzuki Roshi had offered us,

we grew up with him, and found our way as Americans and developing American Zen.

And then on Monday mornings Suzuki Roshi would come to Berkeley and we’d do a sit. And he would give a talk and then we’d have an informal breakfast. And, so I found this place, big place amazingly, had three stories: that bottom story, that middle story and the attic. And, so we built up a sangha there, in that big house, and decided that we wanted to turn the attic place into the zendo.

And so we did. The sangha was very loyal to each other, and to me. Over 12 years, we had developed this place and we wanted to, we wanted to always wanted to buy it, but the owner would never sell it to us, even though he kind of, you know, dragged us along. And so I, we figured, let’s buy a place.

Let’s see if we can find a place to… but it was different then than it is now. We thought that $24,000 was average for a big place. $24,000.! So, somebody turned us onto this place that we have now on Russell Street, which is four buildings, four houses on two lots, and a great, good fortune. And so, over time we developed this place as Berkeley Zen Center.

Uh, these four buildings… we lifted up one, one of our places and put us a floor underneath it. And we took a house with two units and made it into a zendo and, we have a great practice there. That’s been, we’ve been, we’ve been here for 50 years, all together in Berkeley for over 50 years.