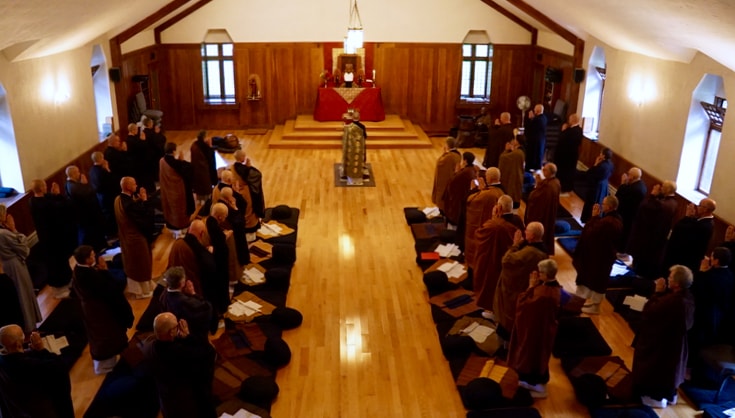 The conference’s keynote speaker Ann Gleig addressed race and privilege through the lens of Buddhist teachings in a presentation on Buddhism’s two truths and whiteness in American Buddhism.

Participants took part in an Indigenous land acknowledgment statement at the opening of the conference that paid tribute to the original inhabitants of the land where the event was held, as well as discussions about the #MeToo movement, a full moon ceremony, and a repentance ceremony.

During the repentance ceremony, a statement of recognition and repentance written and edited by white, straight, cis-gendered male teachers—including Norman Fischer, Koun Franz, and Greg Snyder—was read at the conference. The idea for the statement came from the president of the SZBA board, Tenku Ruff, after she witnessed a public apology by members of the military to Native elders at Standing Rock in 2016. 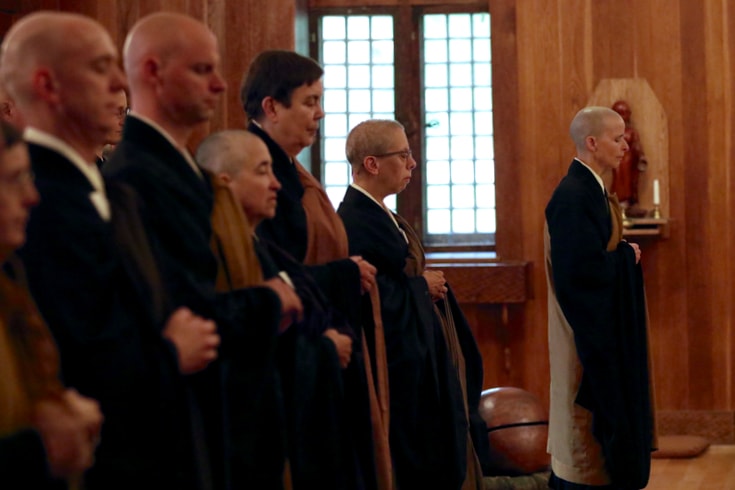 Attendees listen as a statement of repentance is read.

“The SZBA conference we just completed represents a deep and significant shift in North American Soto Zen Buddhism,” wrote Ruff. “We are all still a bit awestruck by the vulnerability and power of the past four days spent together. Personally, I am filled with awe and raw with emotion.”

SZBA’z statement of recognition and repentance is included below:

Gathered here today as Zen Buddhist priests and custodians of the dharma, we pledge to face, acknowledge, understand and hold the weight of our collective karma so that we may practice and teach with clarity, vulnerability, and honesty.

With heavy hearts, aware of our own complicity we understand:

That across time and culture men have harmed and dominated women, creating patriarchal cultures of fear. Buddhist and Zen culture have been as guilty of this as any other, sometimes even distorting the teachings to allow for such misguided power to be wielded.

That we in this moment and in this very place stand on sacred ground of indigenous peoples that has been stolen from them and with cruel deception and religious doctrine maintained as if a right of those who have taken it. Our nation has capitalized on this theft, and their internment and genocide— a theft that continues as indigenous peoples remain unacknowledged and uncared for by a cruel social system they had no hand in shaping.

That the colonization of what we call the Americas, and the rise of the United States as a global power, rests upon the enslavement of African people taken violently from their homes and forced to labor under brutal and oppressive conditions.

That we as individuals and communities live in a world in which some, only because of the color of their skin, are accorded social and economic privilege. We recognize the willful blindness that upholds this privilege, as well as the indignity and pain of systematic oppression, exploitation, enslavement, and deportation of those whose skin does not accord them this privilege:

We atone for the suffering caused by racism in all its forms, and vow to dismantle the white supremacist systems that maintain oppression, including mass incarceration and the deportation, persecution and exclusion of refugees and immigrants.

That we as individuals and communities, have treated people with disrespect, cruelty and violence because of their sexual orientation and gender identity.

That we as individuals and communities are complicit in an unfair, classist economic system that divides humanity into winners and losers, exploiter and exploited, and that encourages selfishness and conflict.

That as human beings, we cannot separate the gift of our own existence from the violence being done, through short-sightedness, greed, and self-importance, to our planet and the many beings with whom we share it.

As individuals, as a sangha, and on behalf of all who came before us, we atone for our participation in all systems that perpetuate domination, violence, greed, disrespect, and unfairness. We pledge ourselves to overcoming these forces in ourselves and in the world for the benefit of all sentient beings, victims as well as perpetrators.

Now as we chant the verses of repentance and renew our vows in the Full Moon Ceremony, we bow in reverence, sorrow, and determination to overcome and heal the forces that cause such pain, for ending suffering within and without is the Dharma’s true Gateway, the Buddha’s True Heart.