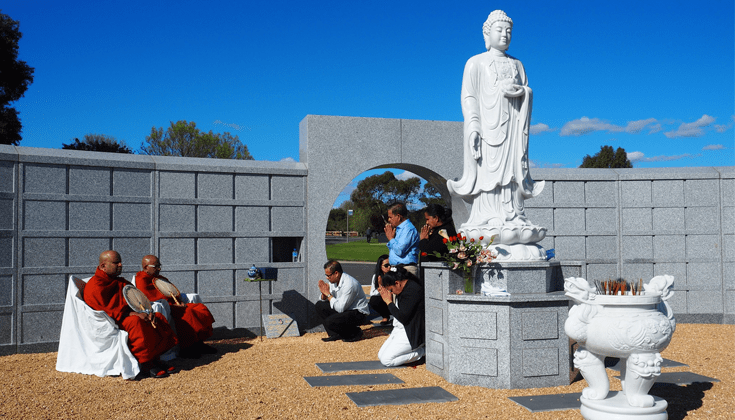 As Lion’s Roar previously reported, the burial grounds opened on April 3 at Enfield Memorial Park in an effort to meet the needs of South Australia’s emerging Buddhist community.

While the first placement in the cremation memorial wall was a solemn occasion, Adelaide Cemeteries Authority Chief Executive Officer Robert Pitt says it was pleasing to start serving the needs of the state’s Buddhist community.

“We’re really proud of the partnership we’ve developed with South Australia’s Buddhist community, and feel privileged to be able to create such a special place for Buddhists to gather and remember in death,” he said.

The cremation memorial wall holds 120 family niches, and sits adjacent to the garden’s centrepiece, a four-meter tall Buddha statue. The grounds also feature an incense bowl and offering table, bodhi trees, and a circular road to allow funeral processions to circumnavigate the Buddha statue three times prior to interment.