Lin Jensen opens his heart to a schoolyard bully and learns that there isn’t much hope for any of us when some of us are left out. 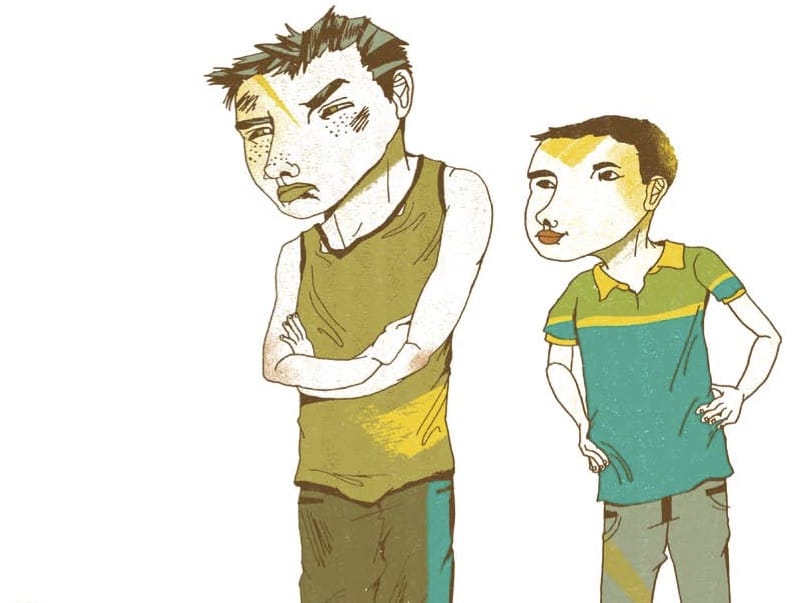 A few years after I undertook Buddhist practice, I took the four bodhisattva vows, the first of which is, “Though beings are numberless, I vow to save them all.”

The answer: “By letting them in.”

Though I didn’t quite grasp the implications of it at the time, in taking the vow to save all beings, I’d committed myself not only to “save” my family, friends, and the checkout clerk at the grocery store, but my supposed enemies as well—all the people I most feared and disliked in the world. I’d undertaken a practice of total inclusion.

I’d already learned something of what this might mean from Leo Schroff. When I was in seventh and eighth grade, he was the shunned schoolyard bully—unpredictable and violent. Once when a kid named Jerry stepped into the bus line in front of Leo to talk to a buddy, Leo yanked Jerry out of line, smacked him across the face, and threw his books into a mud puddle. And when Jerry’s buddy complained, Leo grabbed him as well, knocked him to the ground, and spit on him.

Having been held back several grades, Leo was bigger than the rest of us. Teachers seldom asked him questions in class or tried to include him in any way, and when they did try to include him, he’d often say something that made no sense at all. One of my classmates looked up the word “idiot” in the school dictionary and found that it referred to someone with a mental age of less than three years. And so Leo was alternately dubbed an “idiot” or a “retard.”

Leo would sometimes get into our lunch bags on the shelf in the cloakroom and take whatever he wanted for his own lunch. When he stole a sandwich and chips from me, I was too intimidated to protest and wouldn’t eat what little was left of my lunch for fear Leo might have touched it. He often came to school scabby and bruised, and he’d let his nose drip without doing anything to wipe it clean. All in all, he was a social outcast.

But witnessing Leo in his isolation day after day, at times I felt uneasy about taking part in the exclusion.

The day Leo’s father showed up during recess challenged my views of this. I don’t know what Leo might have done to so anger his father, but suddenly there his father was coming across the schoolyard shouting at Leo that he was “a dumb bastard.” Seeing him, Leo froze on the spot and started shaking and crying. Leo’s father was a big man, and when he shoved his face into Leo’s, Leo looked small by comparison. I heard him say once more, “You’re nothing but a dumb bastard,” and then I saw Leo’s head get popped backward. His father took off and Leo was left spitting blood on the grass. I’d never seen Leo cry before and I’d never known him as a victim of anyone else’s bullying. I came up to Leo. “Are you okay?” I asked.

“What’s it to you, you little bastard?” Leo said.

Well, what it was to me was that for the first time I was actually seeing Leo as another human being, and since my own father beat me as well, I knew something of Leo’s feelings. Had I not been so small, hesitant, and fearful, I might have been a bully myself.

Not long after Leo’s father appeared at school, a new student, Ron Coleman, enrolled. Ron was athletic and as big as Leo, but he was also quiet, easygoing, and not at all inclined to use his size as a threat. Apparently, though, size itself was threat enough for Leo, who quickly picked a fight with Ron. Leo knew nothing of fighting fair and he gave Ron a bloody nose before Ron even knew he was in a fight. But after that, Ron held his own, and being quicker and smarter than Leo, soon had the advantage. Ron could snap the fingers of his left hand above Leo’s head and Leo would drop his guard and quite stupidly look up, leaving Ron to hit him at will.

A bunch of guys formed a circle around the fight, egging Ron on and taunting Leo with any insult they could think of. And then Ron, realizing the sad limits of the person he was fighting, simply stopped, and shaking his head in what I took to be disgust at his part in the cruelty, turned and walked away. But everyone else kept the circle closed around Leo, taking advantage of the opportunity to pay him back for his bullying. Leo was bleeding from the mouth and his eye was swelling shut. That’s when I went and stood beside Leo, and this time Leo didn’t insult me or push me away. And that’s when Ron came back into the circle and shook Leo’s hand and, with an arm around his shoulder, led him away from his taunters.

Dick Ranney, the school’s unofficial P.E. teacher, had come upon the fight just in time to see how it dissolved. The very next day, he herded a bunch of us into a cleared space in a maintenance shed at the far end of the schoolyard. He had pairs of boxing gloves, and he explained to us that boxing was a gentleman’s sport and that if we were going to fight, we needed to learn to box properly. So the weekly lessons began, and Leo took to it. The only ones big enough to spar with Leo were Ron and Dick Ranney himself. But Leo got better and better at boxing until only Ranney, who’d once been on a college boxing team, was able to seriously challenge him. The consequence of this was that Leo now thought of himself as a boxer and would tell anyone he could get to listen that boxing was “a gentleman’s sport.”

In time, Leo more or less quit bullying us, though you still couldn’t risk crossing him in any obvious way. Ron started bringing extra lunch and sharing it with Leo and some of the other students would hand him an extra apple or orange or hard-boiled egg from time to time.

After that, Leo only rarely stole from our lunches, for which we were thankful. I think most of us quit casting Leo so much in the role of an outsider. We’d learned from Dick Ranney and Ron Coleman’s examples to at least partially include him. 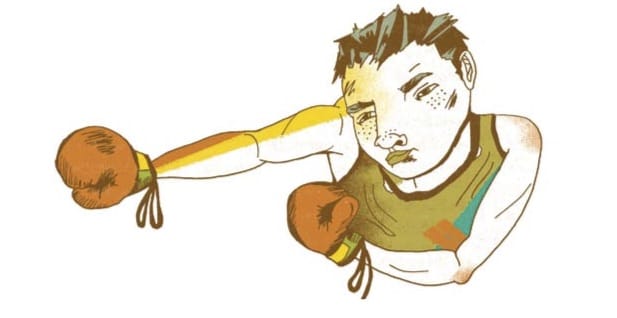 Leo left school for good at the end of that year, having outgrown the age of attendance required by law. After Leo’s departure from school, I’d see him from time to time at Friedson’s dairy wearing splattered rubber boots and herding cows through the muddy yards into the milking shed. Eventually the dairy was shut down and what remained of the dairy herd was carted off for tallow or dog food. The weeds took over and that was the last I saw of Leo.

At length, I came to understand that there’s not much hope for any of us if some of us are left out. For five years now, I’ve served as Senior Buddhist Chaplain at High Desert State Prison, a maximum-security prison in Susanville, California, where I counsel men who, like Leo and his father, are caught in the downward spiral of bitterness and guilt. The Buddhist inmates at the prison had been without a teacher for more than four years when I was asked if I would please come. I had my plans pretty well mapped out at the time and didn’t really want to undertake anything more. Furthermore, High Desert State Prison is on the eastern side of the Sierra Nevada, a drive of two and a half hours from Chico, the town I live in on the western side. I said I’d think it over.

But the decision felt like it was taken out of my hands the first day I entered the prison complex and met one of my potential students. After passing through the outer perimeter, with its lethal web of electrified wiring, and after negotiating a seemingly endless series of electronically controlled gates that opened and shut behind me, I finally arrived on a catwalk outside cell C5-218. I peered through a thin slit of a window at the face of a nineteen-year-old Asian boy who was serving a sentence for first-degree murder and wouldn’t even be considered for parole until he was in his mid-fifties. He was, like Leo before him, a misfit. His face was pocked and scabby with some open sores. His eyes were evasive and had difficulty meeting mine. I told him who I was and what I’d come for. At first he seemed confused by the information, puzzled as to what my appearance at his cell meant for him. But then, he suddenly brightened a little and asked, “Are you my teacher?” And without a thought for the consequences, I said, “Yes, I’m your teacher.”

“Are we going to have Buddhist services?”

“We’ll have services,” I told him. And so for all my plans to the contrary, life turned me in a new direction, the difficulties and blessings of which I could never have foretold. I cast my lot once more with outcasts, continuing a journey I’d begun years ago when I’d made some small place in my life for the inclusion of Leo Schroff.

If we are to survive in any sort of decency, we must set aside our fears and distrust. We must clear a path in our hearts that reaches all the way into the hearts of those whom we would otherwise cast aside. Seng-ts’an, the third Chinese Ancestor of Zen, taught that “the ultimate way is not difficult; just avoid picking and choosing.” Seng-ts’an’s ultimate way is the way of the interface of all beings—human, animal, mineral.

On November 4, 2008, Californians passed Proposition 8, amending the state constitution to ban same-sex marriages. Legislating the exclusion of lesbians and gays from society denies the reality of our shared humanity. From the viewpoint of one who has entered the Buddhist path, this sort of selective exclusion simply doesn’t make sense. To the Buddhist it is like rejecting the shape of one’s own face. If the ultimate way is one of compassionate inclusion and love, then I don’t get to pick and choose who gets to love and who doesn’t. And since to love is to cherish and nurture life in all its forms, then nowhere in the whole of this wide Earth do I get to say what stays and what goes. Whatever I deny to others, I’ve already lost to myself.

If I walk the path of preference, I will be constantly at pains to rid the world of whatever offends me. If instead I come to realize that our lives and histories are shared, then the whole world is kin and I take my place at the table where the entire Earthly family is invited to dine. No one told to go hungry. No one left outside.