When humans are startled, we flinch, we shut our eyes, and our hearts start beating faster. It’s an automatic response that’s nearly impossible to suppress – unless, maybe, you’re meditating. 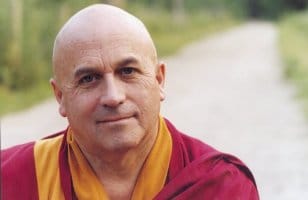 There’s an oft-repeated anecdote about an experiment conducted with Buddhist monk Matthieu Ricard. During meditation, he responded quite differently than most people would to a sudden loud noise. While Ricard sat in a room and meditated, researchers set off a 115-decibel burst of noise, equivalent to a gunshot.

It was loud, but as the story goes, Ricard didn’t notice – well, almost. Many reports that have circulated about the study say Ricard was able to completely suppress the facial muscle movement that people always show after being startled. But, as Tom Bartlett points out in a blog post at the Chronicle of Higher Education, the truth isn’t quite that dramatic.

While Ricard was sitting in meditation, Bartlett explains, the muscles in his face did react to the sound, though not as much as other test subjects’ did, and not as much as Ricard’s did when he wasn’t meditating.

The experiment was performed ten years ago, but the study, titled “Meditation and the startle response: a case study,” wasn’t published until this summer. But in that decade, some of the study’s findings have been reported and sometimes exaggerated. The exaggerations, Bartlett explains, came from remarks made by Paul Ekman, one of the study’s authors and an expert on the relationships between emotions and facial expressions. Ekman said that he couldn’t see the startle response, and he thinks people misinterpreted this to mean that because Ekman couldn’t see it, Ricard had completely eliminated it.

Ekman also decided to test whether Ricard could alter the startle reflex, the physiological response to a sudden loud noise. Following standard procedure, the researchers told the subject that they would count down from ten to one, at which point a loud noise would go off, the equivalent of a pistol fired near one’s ear. “I documented that Matthieu was able to focus his attention using a meditative practice so as to minimize any sign he had been startled,” Ekman says. He told the Dalai Lama, “I thought it was an enormous long shot that anyone could choose to prevent this very primitive, very fast reflex.”