In light of the COVID-19 pandemic, Buddhist Global Relief has launched a new online initiative, “Buddhist Action to Feed the Hungry”,  beginning in October, in place of their annual “Walk to Feed the Hungry.” Founder Ven. Bhikkhu Bodhi shares the history of the organization and the event. 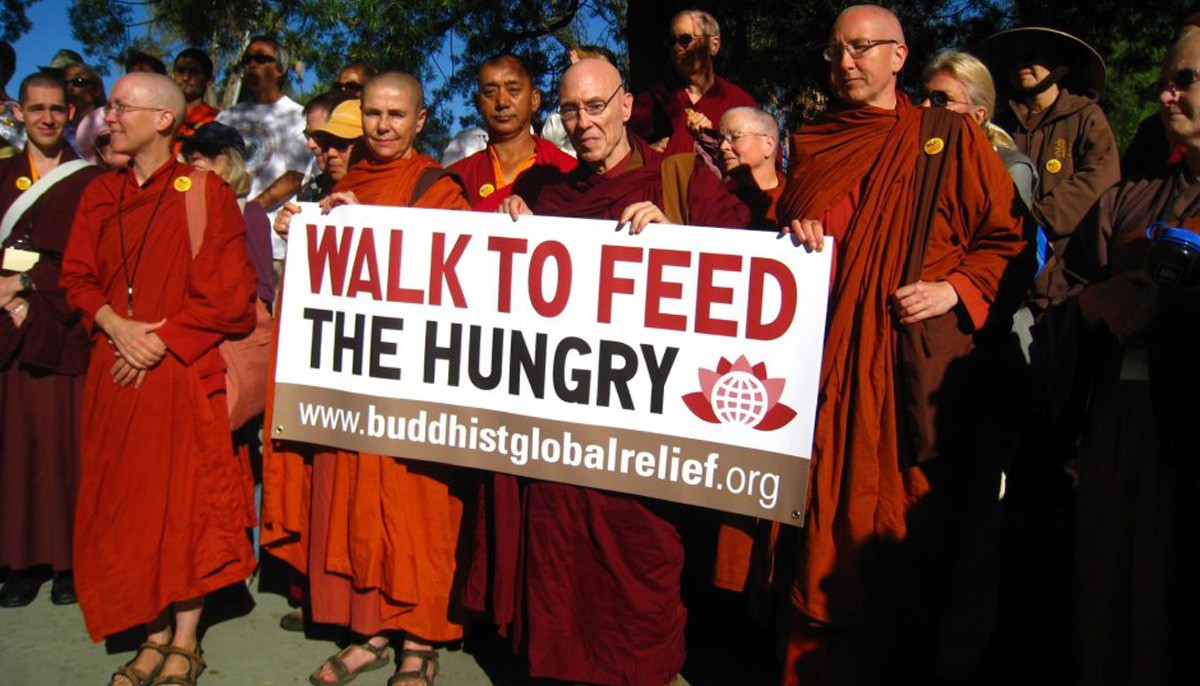 In 2008, along with several of my students and friends, I founded an organization called Buddhist Global Relief (BGR), which takes as its mission helping poor communities around the world escape the scourge of chronic hunger and malnutrition. The growth of the organization has far exceeded our expectations. We launched BGR in June 2008 with three pilot projects. Over the years, in response to our initial success, donations have steadily flowed in, enabling us to expand the number and range of our projects until we now sponsor about forty projects a year.

The projects span four major areas: direct food aid, education for poor girls and young women, right livelihood opportunities for women, and ecologically sustainable agriculture. The countries where the projects take place range from far-flung Mongolia, through southern Asia and Africa, to pockets of poverty right here in the United States. The projects are formed in partnership with other organizations combating hunger and malnutrition. A few are large like Action Against Hunger and Helen Keller International, but most are small, like CC-READ in Cameroon, the What If Foundation in Haiti, and the Bodhicitta Foundation in India.

The reason we chose to make hunger and malnutrition the center of our mission is partly rooted in the Dharma itself. We drew upon such statements of the Buddha as “there is no illness like hunger,” and his declaration that a conscientious person would share his or her last morsel of food if there was a needy person present to receive it. However, we also chose to focus on hunger because of my own personal experience during my first years as a monk in Sri Lanka.

I arrived in Sri Lanka in October 1972 and was ordained as a novice monk the following month. My teacher, Ven. Balangoda Ananda Maitreya Mahanayaka Thera (1896–1998), was a prominent English-speaking Sri Lankan scholar-monk. I intended to stay with him and study Pali and Theravada Buddhism under his guidance at his temple on the outskirts of a small village named Udumulla, about two miles from Balangoda, a town in the southeast hill country. Apart from Ven. Ananda Maitreya, the other monks at the temple were all novices between the ages of 8 and 16 who were studying at the monastic school on the far side of Balangoda.

Though Ven. Ananda Maitreya was one of the most respected monks in the island, his temple was located in a poor area and thus could provide only the simplest food for the resident monks. Breakfast was a watery rice porridge, accompanied by a couple of cream crackers or a slice of bread and margarine. Lunch each day consisted of red country rice with a watery dahl, a potato or yam curry, and a green vegetable, usually green beans or a fibrous water plant. Occasionally there would be a dish of sprats, small dried fish similar to sardines, but since I was vegetarian, I did not partake of this. For dessert there would be a small banana, and sometimes slices of mango, pineapple, or papaya. We had the same thing virtually every day, except on the full-moon observance day, when we would be treated to more ample food.

The red rice was exceptionally nutritious, but it was the only substantial food at the meal and on its own was not sufficient to satisfy the body’s nutritional needs. In accordance with the monastic rule, I did not eat after mid-day. At the time, Ven. Ananda Maitreya was the chief elder of the Amarapura Nikaya, the monastic fraternity to which he belonged, and thus he would be invited several times a week to monastic functions, which would always feature a sumptuous alms offering. But the rest of us had to subsist on the regular temple food.

Several times I asked my teacher for permission to go on alms round, but he insisted I take my meals at the temple. I believed he wanted to feel he was a cordial host and so I acceded to his request. He was very kind and compassionate, but he just didn’t understand my need for more nourishment. I also took the situation as a personal challenge to my own ability to cultivate patience, equanimity, and contentment. As an idealist, I thought that having entered “the homeless life,” I should be ready to endure the challenges such a life presented, including that of living on a skimpy diet.

Because the red rice was filling, I did not immediately feel the impact of the daily reduction in my nutritional intake. After several months, however, the lack of adequate nutrition began to take its toll. I felt the vitality and energy ebb from my body until a point was reached where almost all I could think about was food. This was not, I have to stress, a craving for delicious flavors, but a physical craving anchored in bodily need. My midday meal would be fully digested by 2 or 3 pm, and then an insistent feeling would swell up and gather force like a giant wave rising up on the surface of a tranquil sea. I could almost feel the cells of my body crying out for amino acids, vitamins, and minerals. That feeling would persist through the evening and night. I could hardly wait for the next morning to arrive, when food would again become allowable.

The bodily cry of hunger increased day by day, leaving me feeling weak, depleted of energy, sometimes even listless. I don’t want to compare my condition to that of the children we see in pictures from famine-struck countries in Asia or Africa. I was a light year away from their plight, but I was definitely experiencing intense hunger that cannot be imagined by those who think they’re famished when they miss a couple of meals. I knew that my body was being incrementally deprived of the nutrition it needed for optimal functioning, and this was not at all pleasant. On some days I would even look at my rubber flipflops and wonder whether they were edible.

In my second year at the temple, a monk from India named Saddharakkhita came to stay with us. He was given the cottage on the opposite side of the main temple from my own hut. Disposed to an ascetic lifestyle, he insisted on going on daily alms round for his midday meal, and apparently my teacher consented to this. We became friends and would meet every few days to chat or discuss the Dhamma. One day, when I went to his cottage for our chat, I saw a banana leaf on the floor with a heap of discarded food on it. When I was seated, Ven. Saddharakkhita asked me: “Did you see the dogs today? I have a lot of leftover food, but the dogs haven’t come around.” At once the thought occurred to me: “By heaven, the dogs here are eating better than I am,” and I burst into tears. Saddharakkhita asked me, “What’s wrong?” I then told him about my problem with the diet and said that I was feeling famished. He at once understood and told me, “You come with me on alms round. I’m getting more food than I need.”

From then on, until I left the temple, I went with Saddharakkhita on daily alms round. We went to many villages throughout the area, some quite distant from the monastery. Rain or shine, we walked across rice fields, up hills, and along narrow paths, which took us to hamlets tucked into the terrain that were invisible from the temple. Since monks on alms round are considered a “field of merit,” the people gladly welcomed us and provided us with generous offerings, always well prepared. This ended my ordeal with the pangs and debilitation of hunger, but over those two years I had learned a lesson that has stayed with me throughout my life.

I had experienced hunger, not merely as a growl in the stomach that can be easily appeased by a meal or snack, but as an incessant demand rising up from the cells of one’s body, a demand that one cannot silence by an act of will. I have known what it means to anticipate each meal with eager expectation, and then plunge into dismay and gloom when the food is insufficient to stay one’s hunger. Whenever I hear or read about those condemned to go hungry every day, I have an inkling of what they are going through and my heart’s strings resonate with them.

It was for this reason that, back in 2008 when we had to choose a specific mission for Buddhist Global Relief, I proposed dealing with global hunger. While the hunger that I experienced back in the early 1970s may have been only a fraction of the hunger that daily afflicts people living in persistent poverty, I can easily imagine their suffering and a force swells up in me bidding me to take action to reduce their misery.

Since 2010, BGR’s main fundraising activity has been an annual “Walk to Feed the Hungry.” We started with a single walk in New Jersey. Over the years the number of walks have increased until, in recent years, we’ve been holding ten annual walks from coast to coast, with satellite walks in the U.K., Uganda, and India.  Most of the U.S. walks have taken place in the autumn, from late September through early November.

This year, the COVID-19 pandemic prevents us from holding our walks—except the walk in Connecticut, where the danger of viral transmission is almost nonexistent. In place of the other walks, we have launched a new initiative, called “Buddhist Action to Feed the Hungry”—a network of online events around the country to mobilize American Buddhists and friends of Buddhism everywhere, wherever they may live, to join us in taking compassionate action to combat chronic hunger and malnutrition.

Most online events will be held in October—and one in November—when sanghas and Buddhist centers across the U.S. will host live-streamed dharma gatherings featuring talks about global hunger, presentations by BGR project partners, dharma talks by noted Buddhist teachers, and guided meditations. There will be several regional events as well as a “national event” that will replace the New York City walk.

A list of the events can be found on our website here. Through each event page on the website you will be able to share the event and encourage friends and family to donate. You can also set up a Facebook page to mobilize donations to support Buddhist Global Relief.

I write to urge readers of Lion’s Roar to join at least one of these online events—or even several—and to contribute generously to support the work of BGR. You can learn more about BGR, and about the wonderful ways it has been uplifting lives all around the world, through this short video.

I thank you in advance for taking action with us to relieve the suffering of thousands of people in need in the U.S. and around the world!